Up at the Cape this weekend for a soccer tournament, and after family duties were fulfilled I got the chance to wander out. Saturday night at my secret spot was a bust. The good news was twofold: I now have some intel on how the channel has shifted, and I did not sit on that big driftwood log that turned out to be a seal carcass (always confirm your landing zone before you park your butt).

Last night I met up with some people I know from Stripersonline.com. We fished a spot that was new for me, and I liked it for its moving tide and structure. The action wasn’t anything to get excited about, but most of the group managed to touch a fish. I’m quite sure my second striper will be the smallest one I will catch this year. How he managed to eat a 3/0 hook is a question for marine biologists to ponder.

I hope you had a good holiday weekend, and please be sure to pause a moment and remember those who made the ultimate sacrifice in the service of our great nation.

Forget the calendar or the current warm spell — we are already in summer mode. That means low water, very spooky fish, and, I suspect, a large number of residents unwilling to show themselves. The water is still at mid-spring temperatures.

The canopy is full in, and does an exceptional job of keeping things cool.

Pricked close to ten fish, with none landed. All my risers were found in deeper and/or faster water, with an emphasis on “faster.”

Observed three nursery pools — shallow and slow — that held numerous young-of-year brookies. Looks like a strong Class of 2015 if they avoid the birds and survive the summer extremes.

Found a new brook on the way home and lost a pig (for a small stream) on my first cast. He was so twitterpated that he leapt twice after he spit the hook. I’ll see you again, pal, since I know where you live.

Let them be. Ugh. After the mild winter, it’s going to be a disaster season for poison ivy.

See if you can find Señor Frog. (It’s not that hard.)

That was Wayne’s general assessment of his Farmington River experiences.

Of course, that was before Thursday. Wayne put on a wet fly clinic, hooking nearly double-digits in trout and landing most of them. I had Wayne fishing a traditional three-fly team, and he saw action on both the top dropper (Squirrel and Ginger size 12) and the point fly (SHBHPT size 12). We fished three locations within and outside of the permanent TMA, and found customers in all of them. Caddis, midges, and in the afternoon some Light Cahills and smaller BWOs. Water a terrific wet fly height, 350cfs, and a cool 54 degrees. Hats off to Wayne for an outstanding day.

“Are you still there?” Yes,  he was, and as a result we have this bent rod to deal with.

A different perspective on the release.

I dropped the ball on this, but we’ll plead better late than never.

The Yale Fly Fishing Club is hosting the International Fly Fishing Film Festival in New Haven. A portion of the proceeds from the event will go to Rivers of Recovery and Take a Vet Fishing.

Here are the details:

The link to purchase tickets: https://www.showclix.com/event/IF4NE…016/tag/widget
More info about the film can be found here: http://www.flyfilmfest.com/

Getting home from a fishing trip when the birds are just starting to sing is significant.

It can mean the fishing was so good you lost track of time. It can also mean you were stupid enough to leave your home before midnight and stay out long past where good sense should have compelled you to stop.

And sometimes it’s a little of both.

We’ve been working the striper night shift here at currentseams for the past three weeks. While it’s been a mixed bag, it has been better than last year (pretty much a blank repeated ad nauseum), with only one skunking in the mix and my first keeper of the year. Most of the fishing has been wonderfully meditative greased line presentations with large flatwings. And I’ve had the chance to reconnect with my beloved five-weight.

The best striper of the spring so far, a 30-incher who found my Rock Island flatwing to her liking. I was lucky to catch this fish — she came at the end of the drift on my last cast of the evening, and saved me from the dreaded polecat. Loads of fun, and quickly landed on the five-weight. 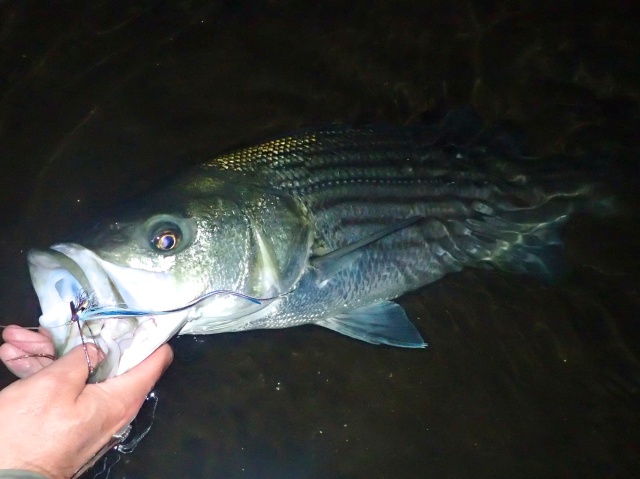 I fished below the permanent TMA yesterday from 11am-2pm. I started off indicator nymphing in a pool that was infested with rainbow trout. I caught a ridiculous number of fish in a half-hour — not a testament to any skill on my part, but rather to the aggressive nature of these trout. Most of the action was on the bottom fly, a SHBHPT. I was pleased to get one on the top dropper, a new fly for me, Liesenring’s Blue Dun Hackle (size 14). Then I went to explore some virgin wet fly water. Nice run, but I blanked with my team of three. Did likewise in two other favorite runs. (Harrumph. I covered a good third of a mile of river without so much as a tap. Nice day for wading, though.) Finished up nymphing and took one more fish. I have to say that while recently stocked rainbows are not why I fish the Farmington, some of these fish are fat and healthy and display tremendous fighting and leaping instincts. Lots of midges and a few small (size 16) caddis.

Sometimes I have no idea what I’m talking about.

Exhibit A: As we waded into the Farmington at 2pm, I remarked to my client Paul, “We’re going to out fish those guys four-to-one.” Some splashy rises had me convinced we were going to clean up with wet flies in this snotty run. The two anglers below us were casting dries in a more moderate flow. Cue game show wrong buzzer sfx. They got one, we got one.

Exhibit B: On Wednesday, I said to Paul, “The Hendricksons are pretty much finished here,” “here” being near the bottom of the permanent TMA. Yesterday, we were fishing well downriver, and the splashy rises were due to an outstanding Hendrickson emergence. The water surface soon became littered with Hendrickson duns. How strong was the hatch? It was raining steadily, and the flies were still easy to pick out on a mottled surface flecked with raindrops. The problem was there was nothing feasting on these easy meals. Paul persevered, and induced a rainbow to eat the middle dropper, a gray/brownish wingless wet.

We decided to head upstream. This is where it got good. The hike to our spot took us past some glassy water where a large pod of trout were picking off Hendrickson duns at will.  We gave them a brief sniff of the wets — nothing. Then I suggested that we clip off the subsurface patterns in favor of a dry. The Usual size 12 was the fly, and the trout loved it. (Apparently, sometimes I do know what I’m talking about.) All you had to do was drift it over a feeder, and BANG! Game on. It was one of the better Hendrickson hatches I’ve experienced on this river. I know Paul had fun.

We went back to the wets for the last hour and managed a couple more trout. A very productive four hours, in terms of both catching and learning. Paul is well on his way.

Water was 275cfs, 49 degrees and clear. Air was 60, clouds and rain. The fishing was quite a bit hotter.

This isn’t the best underwater shot I’ve taken, but I do like the reflection of the spots on the surface film. Since I know where you live, see you sometime this summer.

The river continues to be kind to those who are inclined to swing wet flies. I had Paul out for a full day yesterday to learn the ancient and traditional subsurface method. We fished three spots and found fish willing to jump on in all of them. They took the top dropper (old reliable Squirrel and Ginger), the middle dropper (Dark Hendrickson, even though we saw no such hatch), and the point fly (BHSHPT…what else?).

How gratifying to see so much action in some truly tough conditions: river up a hundred cfs or so (350cfs in the permanent TMA), slightly stained, cold at 47 degrees. The weather was downright chilly, overcast, and it rained or misted or drizzled on us for much of the day. Very little in the way of observed hatch activity: a few stray BWOs (16-18) and some micro midges. We did see swallows feasting on some unIDed flies a hundred feet overhead in the morning. Late afternoon found a mystery hatch below the permanent TMA that had a dozen trout slashing heartily at the flies.

It’s tricky trying to figure out the hook set of a tight-line presentation, especially when you’re fairly new to the game. Paul did a great job of locating that precious equilibrium — are you still there? — as this chunky brown can confirm.