Sometimes I have no idea what I’m talking about.

Exhibit A: As we waded into the Farmington at 2pm, I remarked to my client Paul, “We’re going to out fish those guys four-to-one.” Some splashy rises had me convinced we were going to clean up with wet flies in this snotty run. The two anglers below us were casting dries in a more moderate flow. Cue game show wrong buzzer sfx. They got one, we got one.

Exhibit B: On Wednesday, I said to Paul, “The Hendricksons are pretty much finished here,” “here” being near the bottom of the permanent TMA. Yesterday, we were fishing well downriver, and the splashy rises were due to an outstanding Hendrickson emergence. The water surface soon became littered with Hendrickson duns. How strong was the hatch? It was raining steadily, and the flies were still easy to pick out on a mottled surface flecked with raindrops. The problem was there was nothing feasting on these easy meals. Paul persevered, and induced a rainbow to eat the middle dropper, a gray/brownish wingless wet.

We decided to head upstream. This is where it got good. The hike to our spot took us past some glassy water where a large pod of trout were picking off Hendrickson duns at will.  We gave them a brief sniff of the wets — nothing. Then I suggested that we clip off the subsurface patterns in favor of a dry. The Usual size 12 was the fly, and the trout loved it. (Apparently, sometimes I do know what I’m talking about.) All you had to do was drift it over a feeder, and BANG! Game on. It was one of the better Hendrickson hatches I’ve experienced on this river. I know Paul had fun.

We went back to the wets for the last hour and managed a couple more trout. A very productive four hours, in terms of both catching and learning. Paul is well on his way.

Water was 275cfs, 49 degrees and clear. Air was 60, clouds and rain. The fishing was quite a bit hotter. 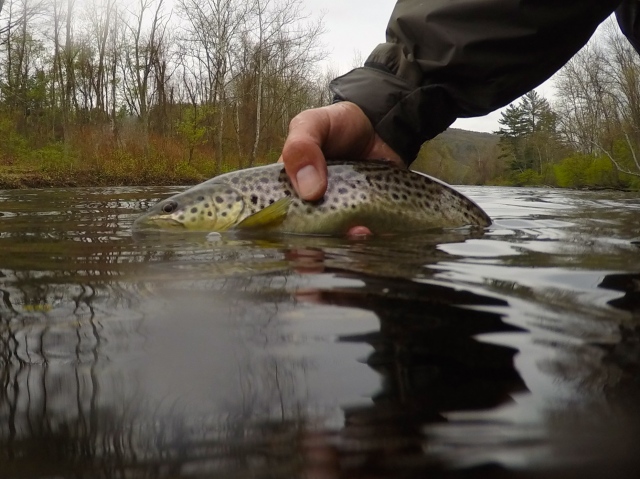 This isn’t the best underwater shot I’ve taken, but I do like the reflection of the spots on the surface film. Since I know where you live, see you sometime this summer.