I received this sad news last week. No more print issues of the MAFFG will be forthcoming. The publishers are currently exploring means of converting the magazine to a viable electronic format. But the days listening to the sweet-sounding rustle of heavy stock newsprint as you devoured the latest issue are over.

Its publishers dubbed MAFFG “the finest regional fly fishing magazine on the planet.” I’d be inclined to agree. I really loved that magazine, both reading and writing for it. There was something in every issue I could count on to make me a better, more well-rounded angler. From a professional standpoint, the editor, Mike Klimkos, gave me one of my first opportunities as an outdoor writer. And as my product matured, he gave me extraordinary editorial freedom.

So, thank you, Mike. Thank you, publisher Paul Rouse, for your kindness and generosity. And so long, old friend.

I’ll take some solace knowing that my work appeared in the last issue of MAFFG.

…my spies tell me it’s good news/not-so-good news. The good: after a couple very down years, the 2016 salmon run has been strong. Here’s a quote from a local guide: “I thought that it would be a good run this year but it has far exceeded expectations.” More good: the watershed received several inches of much needed rain last week. The river jacked up to 2K; current level at Pineville is just over 700cfs. Everyone’s different, but I like higher water for this fishery. A strong salmon run means more eggs and rotting carcasses in the system, so right now is a good time to be tying up some egg and flesh patterns (and of course your favorite nymphs).

Now to the not-so-good: where are the steelhead? Those of us who remember the cruel disaster than was last year’s “run” are eager to return to the halcyon days of prodigious numbers of pre-spawn chrome. So far, that has not happened. Hopefully the next few weeks will see a big push of fish. Otherwise, we may be in for another long, cold, lonely winter. 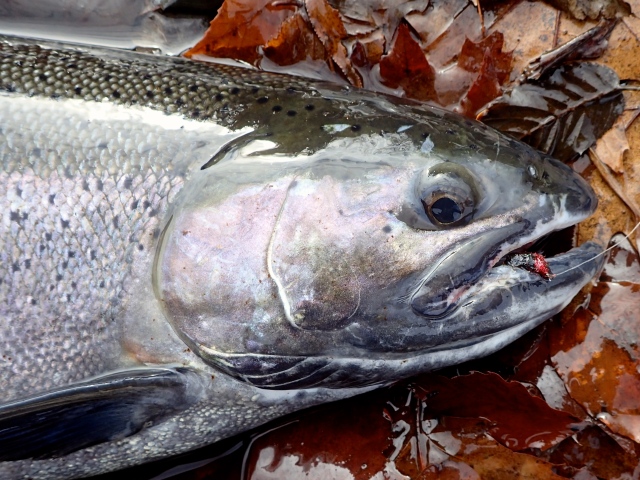 This is an annual census taken by Maryland’s DNR to determine recruitment strength for the previous spring’s (as in a few months ago) class of new-born striped bass. The number was 2.2 (the long-term average is 11.9). While every year is different, this only continues a downward trend that began the year after the banner class of 1996.

You can read more about the count on the stripersforever.org website here.

The Arts of the Angler is a terrific regional show hosted by my friends at the Catskill Fly Fishing Center and Museum. It’s a weekend affair, and it happens this year on November 5th & 6th at the Ethan Allan Inn in Danbury, CT.

This year, I’ll be tying and presenting “Wet Flies 101” on Saturday afternoon, November 5th at 3pm in Room 1. I have a hectic morning, so I’ll be tying as soon as I am able, but it won’t be until 1pm or later. My Sunday is still up in the air — I may be tying on Sunday, too. I’ll update you with that information if it happens. Come out and support the museum, and of course please stop by and say hello.

Here’s the current presentation schedule (I am not responsible for changes):

No sightings of the ocean’s daughter. But I did spend some time watching a small pod of stripers move and feed on the tide change. We’ll get to that in a minute.

In the space of three hours, I managed to fish: skinny water on the incoming and outgoing; under a bridge (I love shadow lines at night); the inside of a salt pond; an estuary on a ripping incoming tide; and a snotty beachfront from a jetty. I fished hard and I fished well, and I dearly wish I could tell you that I slayed ’em, but all I could manage was one dink and a few courtesy bumps.

The outside beach continues to vex me. Conditions off the jetty last night were just about perfect:  a good SSW breeze, substantial breakers, surging whitewater wash. But no predators. This particular spot is a serial disappointment; it used to be an I-need-to-catch-a-striper-so-I’ll-fish-here destination. 2016 makes it 4 consecutive years I’ve blanked at it.

The bridge, the estuary, and the salt pond were good places to fish if you wanted to hook weeds. I did not want to, but managed a prodigious haul of vegetal flotsam.

My only bass came on my second cast of the evening on the incoming. After, I drove around to explore the other places, then spent the last hour alternately casting to and watching a small pod of school bass drift into position at the turn of the tide (it was easy to see them in the bright moonlight). But the bait wasn’t there in any volume, and the stripers didn’t bother to stick around.

And once the clock hit the wee small hours, neither did I.

There. That’s what I’m talking about. Failed experiment in night photography aside, that whitewater wash bottom center is prime real estate for casting your fly. The jetty allows you to fish into the pocket formed by the rocks and sand, not to mention a good parallel shot to the trough just off the beach. When the bass are in there, you find yourself in tight line territory pretty fast.

When they serve pizza at events at my kids’ school, it’s always cheese. Plain, boring, dull cheese. Dairy rubber on flatbread. Now, the fine folks at the Hammonasset Chapter of TU know how to do pizza. The pies last night were so meat-ladenly delicious, I thought my mouth had died and gone to bacon/pepperoni/sausage/meatball heaven. And of course, a fed presenter  is a happy presenter. So, thank you for the hospitality, and thanks for the engaging post-presentation (“The Little Things”) Q&A/discussion. (Bonus: great to see so many familiar faces!)

Afterwards, I went on a little striper expedition to some (for me) uncharted waters. Didn’t like the moon (waxing gibbous), didn’t like the wind (cold front coming, northwest at 10 mph), didn’t like the walk (quite a hike through the woods), but loved the water. A classic funnel with outgoing tide recklessly hurtling to the sea. There were silversides and peanuts, and sadly, precious few predators. Three of us fished two hours to catch a single striper and a lonely shad. But we brought some beer, and I think that helped.

I don’t usually share prototypes, but this sparse soft hackle is a work in progress. It’s based on a peanut bunker bucktail pattern. I think I will add a sparse, flared bucktail throat. It accounted for last night’s shad. Really like the colors and energy of this fly.

A heartfelt shout out to my friends at Mianus TU for hosting me last night. Good crowd, lots of familiar faces, and a very positive energy in the room made the evening a success. I’m really liking how “The Little Things 2.0” is being received, and it’s a fun presentation for me to make.

My favorite question was, “When are you going to do some more tying videos?” The answer is yes. Keep on bugging me. Sooner or later I will bow to the pressure.

Remember, don’t be a meatball. Red light at night.

Last night I fished a spot in Connecticut that, upon further reflection, is having me believe that I’m Einstein insane. It should hold fish. Others have told me they’ve caught fish there. Nonetheless, every time I’ve fished it over the last three years, I’ve blanked. As in not a touch. On the plus side, I had a lovely walk through a salt marsh. And I bombed out some perfect laser shots with my switch rod. But would it be too much to ask for some players? No cigar, as we’re still healing after last week’s oral surgery.

Finally, the weather. Today’s rain was great for my yard — or any stream in eastern, central, or southern Connecticut. Unfortunately, it almost completely missed the northwestern end of the state — so we’re still talking rock gardens on the Farmington and Hous. Bleah.

Time to fire up the steelhead end of the tying bench.

Q: How can you tell you’re on a saltwater fly fishing-based forum?

A: When someone asks about a trout rod, and 90% of the answers focus on rods vis casting and distance rather than presentation.

If you are a long-time reader of currentseams, you will no doubt recall seeing one of my favorite Ray Bergman quotes. For those of you who missed it, its thesis is that it is far more important to be a good angler (leads to presentation acumen) than it is to be a good caster.

I will be the first to tell you that one reason I bought my 10′ 5-weight Hardy Marksman2 was that I could bomb out a 75-foot cast with it. But I’ll also tell you that that distance accounts for 1% of the casts I make on the Farmington every year.

Both casting and presentation are important. But one will deliver the keys to the kingdom much sooner.

This fish was hooked less than a couple rod-lengths away.