Every year is different, and where 2017 (if you’ll pardon the expression) fell short, 2018 was off-the-charts good for legal bass. Many, many stripers over 28″, with one that went a good 25 pounds and missed the magic 40″ mark by half an inch. I already mentioned Block Island in this countdown, which came back with a big striper vengeance. What’s my secret? Put in your time. Follow the tides. Floating lines. And as Ray Charles so eloquently sang, “Nighttime is the right time to be with the one you love.” (You can find out more at my presentation “Targeting Big Stripers From The Shore” at the Fly Fishing Show in Marlborough, Destination Theater Room A 10am Saturday 1/19.)

Yeah, baby. Love the colors on this one. Whenever possible, I try to keep the fish in the water for the photo op. Does it get any better than keeper-size summer stripers feeding on sand eels? As it turns out…

…yes it does. I dubbed her “Long Jean Silver.” Hope she makes lots of baby bass next spring. 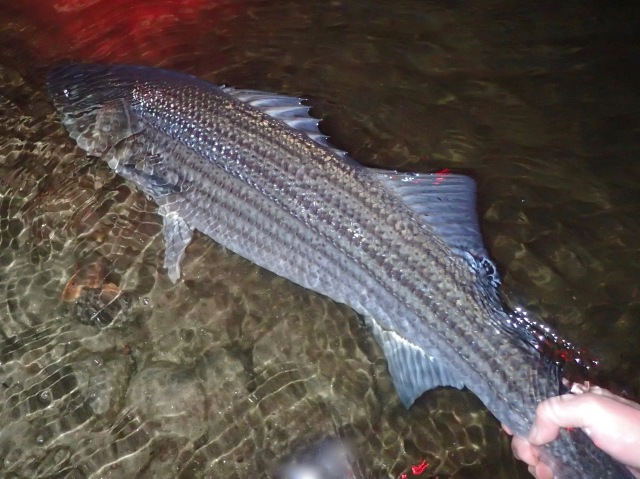 Some stripers should be measured not in pounds or inches, but rather: could this fish eat a small dog? 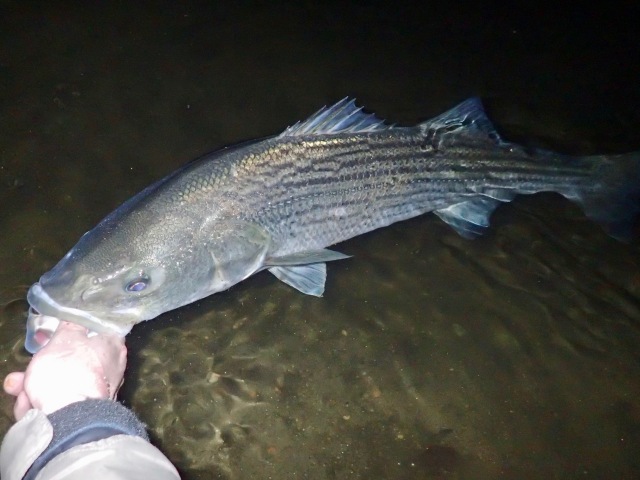 For the uninitiated, a flatwing/bucktail hybrid combines the seductive motion and swimming action of the flatwing (three contrasting feathers here) with the color-blending deliciousness and adding-the-illusion-of-mass properties of bucktail. (See the Rock Island and Crazy Menhaden three feather flatwings.) So, just a taste for now.  Details to come soon.

I don’t know how important color is to a striper at any given moment, but I really like the blends on this fly. 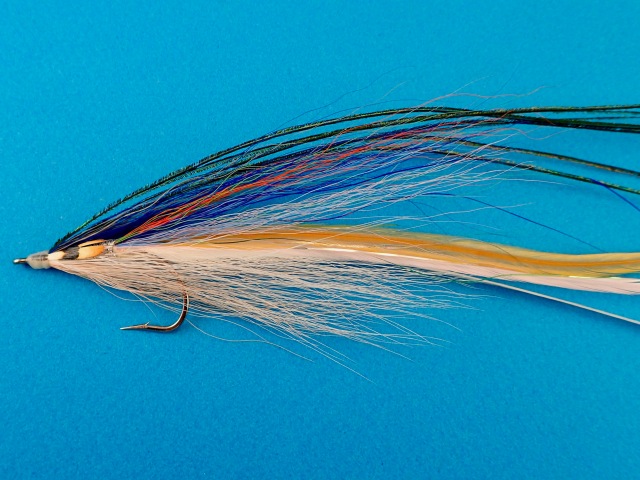 I spent part of yesterday hunkered down at the bench, fingers flying around fur and feather. My intention was to get these out today, but it will have to wait until early next week. In the meantime, feast your eyes — and think about the potential glory you hold within each cast. On we go to 700!

Many thanks to everyone for your readership, kindness, and support. I have lots of good stuff planned for this spring and beyond, so stay tuned.

“The Art of the Flatwing,” written by Tom Keer, appeared in the Summer 2001 issue of Fly Tyer. I’ve had this article in pdf form for years — and now it’s got an online home. Speaking of flatwings, I interviewed Ken Abrames yesterday. Our focus was on the Razzle Dazzle-style patterns in A Perfect Fish: color rationale, nomenclature, genesis, anecdotes and other good stuff. I’m not sure what form it will take, but you’ll get to read/hear some of it in the future.

Here’s my take on the Razzle Dazzle, one of the featured flies in the piece. Ken once described this fly as a caricature rather than a detailed painting or sculpture.

Instead of peacock herl, the topping is an olive saddle and a silver doctor blue saddle tip. 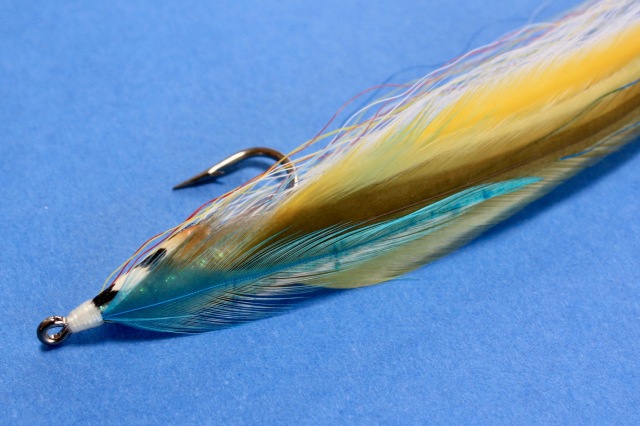 What you leave out of a fly is as important as what you put in.

Long before I fished for stripers, I was aware of striper plugs. I’d see rows of them in gleaming packages in the local sporting goods store (remember those?) and think that some day I’d like to throw one and catch a big bass. I remember liking the blue and white glitter-flecked Atom plugs.

I also remember the Bomber. Something about that plug in basic black said badass cow catcher. Would that translate to a large flatwing? One way to find out.

Creating a striped bass fly that draws from the color and energy of a plug is not new. Ray Bondorew did it it in Stripers and Streamers with his Yellow Rebel. My goal was not to make a carbon copy of the Bomber Long A, but to capture its essence. So, lots of black saddles and bucktail. Some purple to jazz things up. A glowing core of light blue and chartreuse. High contrast jungle cock nails. And some seductive flash tied “Razzle Dazzle” (thanks, Ken!) style.

I like this fly 9″-12″ long. It shines when fished on the greased line swing. Cue up The Gap Band!

You get the idea. 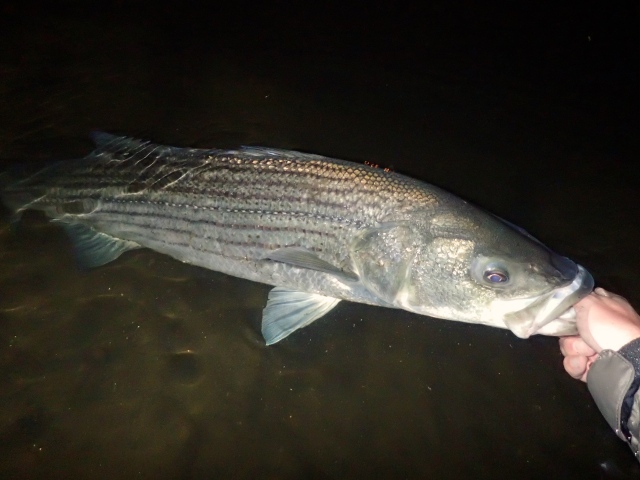 Cold fronts and wind and snow and sleet be damned, I went striper fishing. This was virgin winter water for me; I looked at this place last year and wondered if any bass would care to stay though the cold months. I have my answer.

Only 20″, but a bass is a bass. Dagnabbit, now that I’ve done January and February, I guess I gotta go for 12 consecutive months with a striper on the fly.

The tide and weather and scheduling planets aligned last night, so I found myself standing in some very cold water casting a large flatwing and smoking an Alec Bradley Tempus Churchill.

It did not suck. (All of it.) Especially when about 15 minutes in I started to get a few courtesy taps. I couldn’t tell if it was small fish or a subtle cold water take. Covering water, greased line swinging, and then at the end of a drift, a tug, a re-tug, a hook set, and I was into my first striper of 2018.

It felt so good that not even changing a flat tire in a McDonald’s parking lot in the middle of the night in the rain bummed me out.

Twenty inches of striped wonderfulness. The fight was uneventful until I tried to move the fish over a sand bar into some shallows. He wanted none of that, and we had some surface-thrashing bull-in-a-china-shop runs to break the calm of the night. 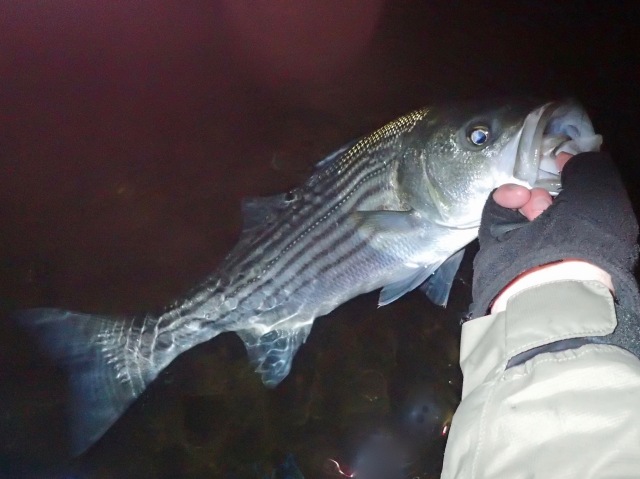