I’ve got stripers on the brain, and so we’ll be talking about the traditional-style striper flies I like to tie and fish: sparse bucktails, soft-hackles, and flatwings. The discussion will include materials and hooks I use, and I’ll throw in a tying demo of something tbd. If you haven’t been getting the Zoom links — I send them out Tuesday late afternoon — please check your spam box. If you’re sending a request to get on the list, please don’t wait until 7:45 p.m. Tuesday night…I won’t be checking my email that late. Thanks!

This is a short video sampler of soft-hackled flies for striped bass. It’s going to be part of my new presentation, “Trout Fishing for Striped Bass.”

I remember that Saturday afternoon like it was yesterday. About nine years ago. Bright sunshine, the middle of the afternoon, and we took striper after after striper on the fly. I can still see the gentleman who was fishing above me, how he so gracefully yet purposefully stripped in each bass he’d hooked. He’d recast, strip, and then he was on again. The only reason I left that day was because I promised my wife I’d be home in a few hours to spell her (we had two very young kids at the time). My friends who stuck out  the tide each had a triple-digit day.

Well, that was then. This is now. Same spot. Same tide. Roughly the same kind of day. And I felt fortunate to get three dinks in the last hour of the tide. (These were river fish, as evidenced by their darker above-the-lateral line coloration.)

I’m fine that I haven’t yet experienced the Bass-O-Matic this year. Really, I am. It’s fascinating how every year is different. I know I’m going to have one of those world-of-hurt striper thumbs sooner or later.

So whoever is in charge of these things, if you’d like to make it sooner, I’d be totally cool with that. Or a thirty-pounder. Or a kick ass summer on Block Island. Whatever you think is best.

When nature calls, a clamshell makes a fine ash ray for your Aging Room Quattro F55. 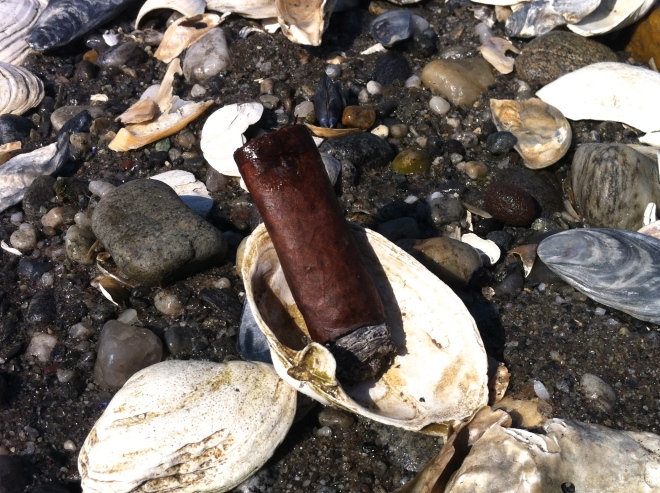