Many thanks to the Conn/RI Coastal Fly Fishers for hosting me last night, and for recognizing that a fed presenter is a happy presenter. Burger and lager and company were all most excellent, and I thoroughly enjoyed our spirited Q&A session.

Next up: “The Little Things” at the October 4 meeting of the Connecticut Surfcasters Association at the Surf Club in Madison, CT.  The meeting starts at 7pm and is open to the public. For more information, visit the Surfcasters’ website.

All this talk of surf and coastal and fly fishing has me daydreaming of Block Island stripers….

I guided Ira and Dan yesterday. Hot, sunny, low flows (105 cfs above the permanent TMA), but the water was plenty cold. We spent the first half of the trip sifting through the pockets and seams of a 200 yard-long boulder field with a team of wets. After my success doing likewise on Monday, I was surprised that we didn’t get a touch. I was demoing a short line deep presentation in a deeper run when hook point connected with salmonid mouth. Armed with that new intel, we headed downstream and re-rigged for nymphing.

And that proved to be the difference between fishing and catching. We found fish in the hot water at the head of the run and just below in the front end. Both Dan and Ira proved themselves to be capable, thoughtful anglers, and it was rewarding to see their persistence pay off. The method was short line, no indicator, drop shot.

A ray of light. Our first fish was this fine native, taken on a size 14 Frenchie variant. 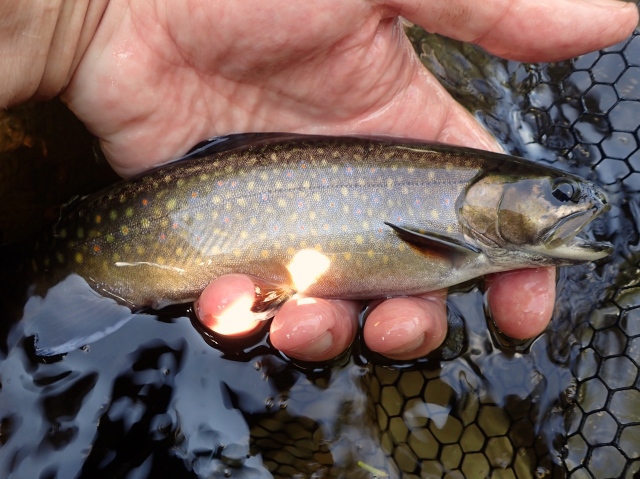 Dan being the man. He hooked a bunch of trout in this medium-sized pocket. 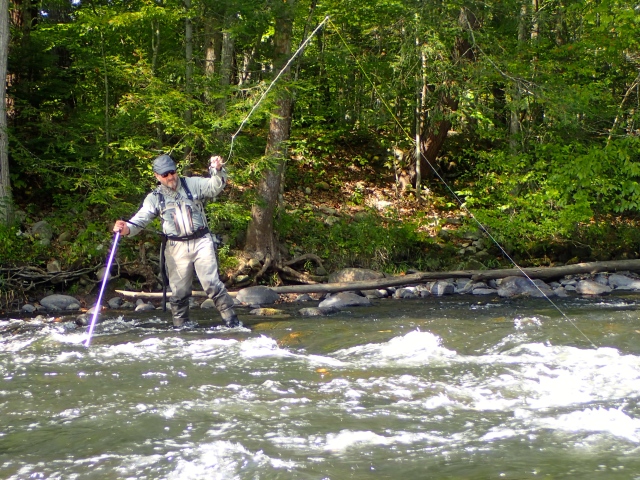 A quick dash to the lower river to see if anyone was home. Water was low, 175cfs, about half of what it normally is this time of year, and felt like it was in the 60s. (Brief editorial: I must confess the logic behind water releases from the dam often escapes me. If periods of drought are the new norm, and September and October are traditionally low water periods, why run 300+cfs from the dam from April through July? Would we have more water now if they only ran 250 or even 200cfs all those months? What am I missing here?)

To the fishing: I swung wets in two runs for about 15 minutes each and came up with two customers, a nice 11″ wild brown and a much bigger, recently stocked rainbow. Both fish took the top dropper, a Squirrel and Ginger caddis. Lots of bug activity (caddis, midges) but nothing rising to it.

At the gigs just keep on coming! I’m a last minute replacement speaker for next Thursday night, September 28, at the Connecticut/Rhode Island Coastal Fly Fishers meeting. The presentation will be “The Little Things,” and it’s at the Elks Club in Groton, CT. You can get more information from their website. Hope to see you there — and man, do I need to get out out and do some fishing.

Time to tie up some September Nights! It’s a two-feather flatwing (three if you count the topping) with some sexy, soft marabou into the bargain. My favorite mullet fly. Did I mention it also works on trout? Do an internet search for the recipe.

Ben wanted to learn the mystical art of the floating line and traditional trout and salmon presentations for striped bass. So we braved the bluster and squalls of Jose and went exploring. We saw bunker in two of the tree locations we covered, but sadly no striped marauders. Ben did a great job with all the information I threw at him, and he’s going to be a dangerous striped bass catching machine.

Sometimes the cast is only a few feet. Ben covers a rip line where marsh grass meets flowing water. 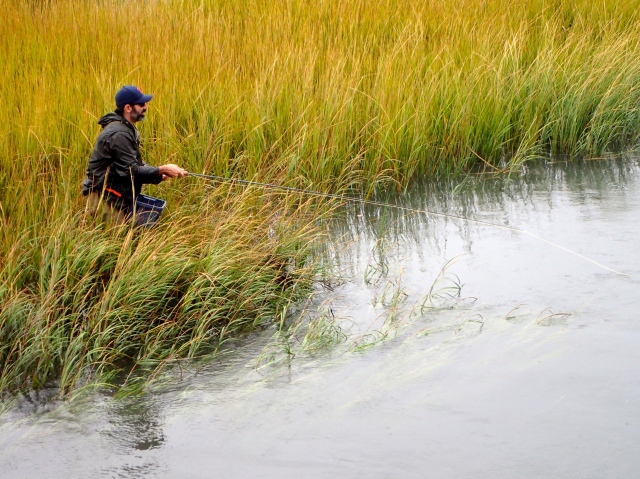 While I’ve gotten many requests for lessons like this, I have in the past resisted due to logistical (I don’t take people out at night) and practical (the day striper bite can be tough) considerations. Now that the seal has been broken, if this is something you’re excited about, we can try to make it happen. You’ll have to be agreeable to a shorter session (2 hours or so), the schedule of the tides (I can’t do anything to change them) and that the on-the-water lessons may not involve catching (see “day striper bite” above). Please don’t try to set something up though the comments section; rather, call or email me.

Bringing fly to fish. You too can learn the meditative art of the greased line swing. Here’s Ben throwing an upstream mend, keeping the fly broadside to the fish at the speed of the current.

Short notice, but I will be presenting “The Little Things” at the October 4 meeting of the Connecticut Surfcaster Association at the Surf Club in Madison, CT.  The meeting starts at 7pm and is open to the public. For more information, visit the Surfcasters’ website.

I’m continuing to work on “Trout Fishing for Striped Bass” — been hard at it today. Still waiting to hear from the Arts of the Angler in Danbury, CT and The Fly Fishing Show in Marlborough, MA, and Edison, NJ. When I have presentations and dates and times, I will share them here.

Number One Son just passed the Florida Bar, but here he is working on his drag-free drift.

The collection for the next generation of Farmington River Survivor Strain broodstock was completed on Monday. The river is now back to a normal medium height (about 240cfs in the permanent TMA). Here are some details on the collection, conducted within the permanent TMA, from Fisheries Biologist extraordinaire Neal Hagstrom:

“We captured approximately 90 brown trout that we took to the Burlington Hatchery for broodstock. The largest was a 22+inch wild male. The state facebook page has some streaming video of the fish workups (visit the CT DEEP Facebook page and scroll down to September 11 — neat stuff!). We also took 15 other smaller or injured trout for general background health checks of diseases, something we do every year.”

Some of the broodstock are Survivor Strain from this year (left red elastomer) and last year (left yellow). About half of the older fish showed no signs of spawning and were returned to the river. The DEEP looks for genetic elasticity in their broodstock combinations, so there is a broad range of sizes, Survivor Strain and wild, and of course  both sexes in the sampling.

Neal commented that while there were plenty of fine specimens, there weren’t a lot of trophy trout. This dovetails with my experience this year: an abundance of high teens browns but not a lot of true brutes. He said the fish should be returned to the river in early December, “and no, we did not take everything. There are still plenty there.”

Thanks, Neal, and thanks to the DEEP for this amazing fishery and breeding program.

We grow ’em bigger than your net. A true 20″ Survivor Strain brown (clipped adipose) taken this summer. It’s hard to photograph a fish this big by yourself, but it’s surely a most wonderful dilemma.

I had a lot of fun last night. What a good crowd to present to — not only did you laugh at all my jokes, you laughed a lot at all my jokes. That’s a sure way to get me to come back.

This summer I began upgrading my presentations: more video elements, animation, and better transitions. Last night was the first go of the new and improved “Little Things,” and I was very happy with the result.

Speaking of presentations, “Trout Fishing For Striped Bass” is almost done. That will make its debut at the Cape Cod Fly Rodders, Thursday, October 19, Hearth and Kettle, Rt 28, Yarmouth, MA, 6:30pm. I understand that’s a members only meeting, so if you’re a CCFR member I’ll see you there.

As soon as I hear from the DEEP, I’ll update you on the 2017 broodstock collection.

Last night’s rain’s added too much water to the system (over 130cfs from the Still) so the broodstock collection has been rescheduled for Monday, September 11. I do not know if they will increase the dam outflow (currently 50cfs) this weekend, so check before you head out.

The collection takes place within the Permanent TMA. Yes, you can still fish, but anglers are asked to give the DEEP crews a wide berth. Quite frankly, I’d skip fishing until the water gets back to a more sporting level, but if you must go, why not volunteer to help out on the collection crew? It’s a great way to give back to the fishery, plus you get to see where the big boys and girls hang out…

If you’re interested in learning more about the Survivor Strain Program, here’s a short piece I wrote a few years ago for The Drake.  Survivor: Farmington 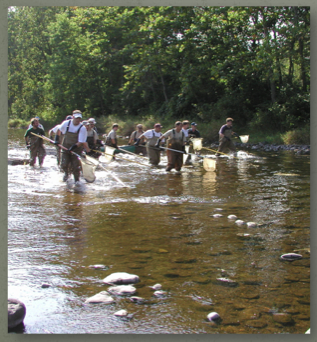 If you’re a regular reader, you should no longer be falling for that scandalous teaser headline. We’re talking about the DEEP’s annual electroshocking/sampling/broodstock collection that eventually produces those wonderful wild and Survivor Strain browns.

You may have noticed the Riverton USGS gauge dropping like a stone: 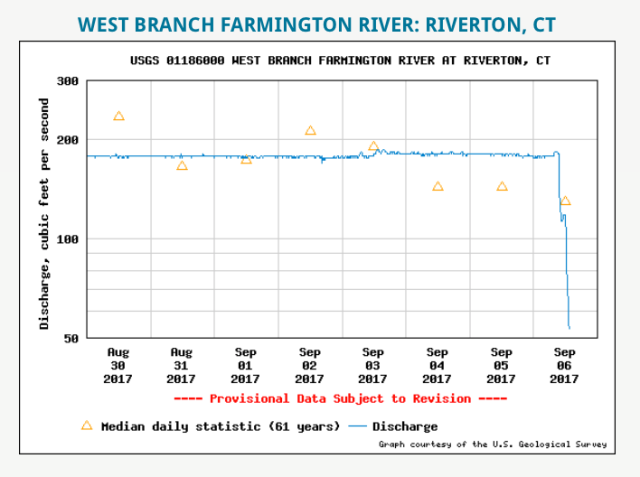 “The hope is to get the broodstock collected tomorrow if the river is low enough.  If not we will try again on Monday.  They are changing out a gate at Rainbow Dam and need the reservoir down to do the work. They are looking at refiling the reservoir on Wed late/Thursday.  The river should return to normal flows then.  Of course, hurricanes  can change everything…”