The October 2015 issue of Mid Atlantic Fly Fishing Guide is out, and with it the latest article from the currentseams wordworks. I had a lot of fun with “Ten Things Every Beginning Steelheader Should Know,” and it mixes humor with practical advice. Worth seeking out if you can find it.

The Mid Atlantic Fly Fishing Guide is distributed free at fly shops or available by subscription. It is an underrated gem. 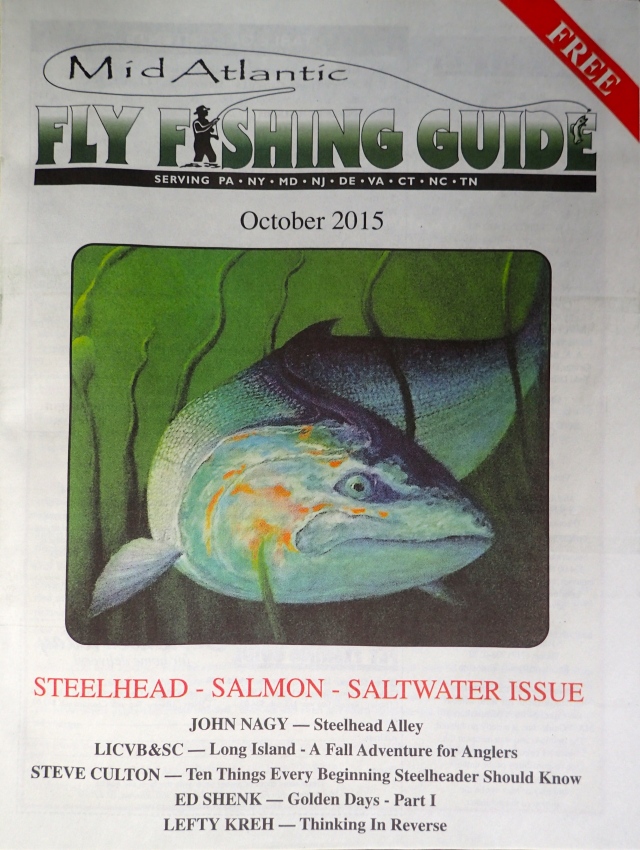 Cam is still a beginning steelheader, but he does a lot of things right. For example… 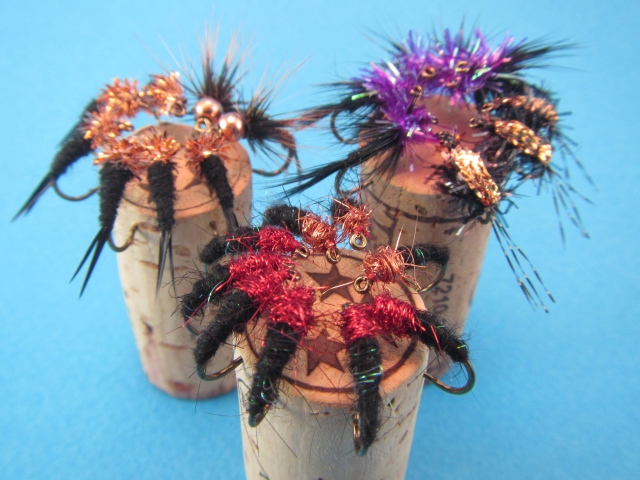 Where: We floated from Altmar to 2A

Duration of trip: About eight hours and thirty minutes

Number of spots we fished: Two

Water level and color when we started: 475cfs and clear

Water level below Orwell and Trout Brooks: 800cfs and rising, color somewhere between tea and chocolate milk with a splash of leaves

Weather: Cloudy and cool to sunny and in the 60s(!). Two brief showers. Windy.

Number of steelhead we hooked: 12, plus one foul we broke off (got the fly back)

Number of steelhead we landed: 9

Number of times I handed the fly rod off to Cam after hook set: 3

Number of steelhead Cam landed: 3, including one hyperactive jumper

Number of steelhead Cam has played on a fly rod before this year: Zero

Kind of flies I caught them on upriver in the clear water: small stones and soft-hackled nymphs, size 10 and 12

Pattern I caught them on in the dirty swill water: size 8 Bead Head Lifter, Pink/Chartreuse and Blue/Chartreuse

Downriver, I figured I’d need a hi-vis pattern to get the fish’s attention. I hemmed and hawed, considered an Egg-Sucking Leech or other streamer, then tried an Estaz Egg/San Juan Worm pattern. No. Tied on the Bead Head Lifter, got the answer I was looking for, and kept it on for the rest of the afternoon.

Number of steelhead I thought we’d catch in the dirty swill water: Zero

Number of steelhead we caught: 6

Ugh. Miles of dirty water. Scores of beleaguered anglers lining the shores. At least they could have gotten into their trucks and driven upriver. But we were bound by the confines of the boat, gravity, and what nature had thrown at us. As the saying goes, you don’t know if you don’t go. Six steelhead landed is a damn good afternoon, any day. In swollen mucky runoff, it’s lottery lucky. Wow. We’ll take it. 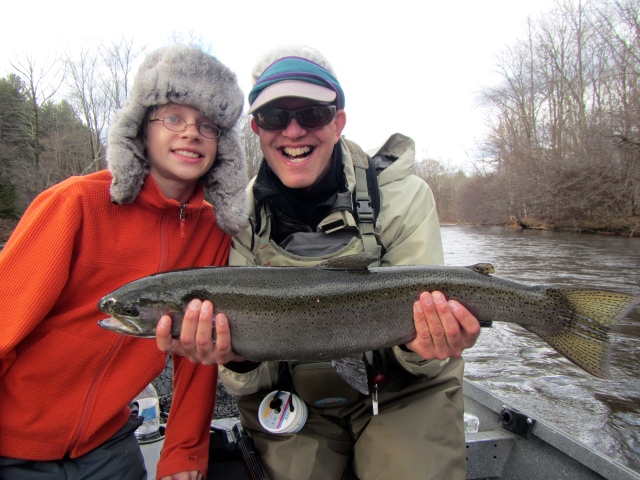 Number of steelhead we landed on our two previous floats with Jim: 3 (I guess we were due.)

Number of steelhead I landed in 2012: 1 (sometimes the bear eats you).

Number of steelhead I’ve landed in the last 13 months: 41 (sometimes you eat the bear).

On a scale of 1-10, energy I felt from being out on the river on a spring-like November day with my son catching steelhead: C’mon.

Just got back from three days on the Salmon River. This fall’s steelhead fishing has been very spotty, so wasn’t I more than pleased to land this magnificent chrome hen a few hours into the trip. Full report to come.

“Do I look fat in this picture?” Yes, dear, you do, and bless every single one of your powerful pounds. She took me into into backing in just a few seconds.