I fished Salt Marsh B last night for a couple hours with #2 Son, Cam. The water was infested with silversides, crabs, and grass shrimp. Surely this bountiful buffet would summon legions of striped diners. But no. There were a few bass around — we even managed to catch some of them — but the audio feeding tells of a hundred popping mouths was strangely absent.  We fished a team of three shrimp flies, a Micro Gurgler on top, Caddis Shrimp middle dropper, and Black General Practitioner on point. All three flies found favor. Given this season and our general location, we’ll take it.

A fine silhouette to see, even in murky marsh water.

“Herringing” may not be a word (or even the formal name of your German neighbor), but that’s what I was doing last night while you were sleeping. But let’s back up a day, to the wee hours of Sunday night/Monday morning.

A-shrimping I did go. I didn’t like the cold air or the east wind, but we’re getting near the May new moon, which is, if you keep track of this sort of thing, primo grass shrimp time in these parts. I fished two marks. The shrimp mating swarm tally at both was disappointing — I’d give it a 3 out of 10 — and the striper action was correspondingly below par. Nonetheless, I fished and hooked up and had a blast. There’s something about the “ploink!” and “squsplish” noises the feeders make that makes me cackle.

Sunday’s rig was Micro Shrimp Gurgler on top, Caddis Shrimp middle dropper, and RLS Black General Practitioner on point. I liked that my first grass shrimp bass of the year came on the GP. So much for the importance of casting distance — the take came about 20 feet away. When stripers are focused on feeding, you can often wade comically close to their position if you’re careful about it. What a hoot to be catching stripers on size 6 and 8 hooks!

Last night’s outing was a fine way to spend the evening, if you place a premium practicing your Perry Poke and short backcast two-hand overhead volley — not to mention nursing an expertly crafted cigar. I fished one mark, a trib known to hold herring and stripers, neither of which were present in any great numbers. So. I covered lots of water. I greased line swung. I swam my Razzle Dazzle in short, staccato bursts. I set a hard stop of very early AM, and made it into bed before 3am.

So goes the night shift.

Hope to see you for tonight’s Zoom. Some of you asked yesterday about getting on the list and haven’t yet sent me an email.  (To be clear, leaving a comment on this site is NOT an email. To get on the list, you send an email to swculton@yahoo.com asking to do so. I hope that helps.)

Many thanks to everyone who attended last night’s Zoom (Pro Tips and Q&A). We’ve been averaging around 50 people (which does not suck) and I’m grateful for the enthusiasm you’ve shown — love all the questions! Stay tuned for details on the next Currentseams Zoom.

I get questions like this all the time: “Last night, I heard and saw a ton of surface activity, but didn’t have a single bite. I was using the usual suspects: Clouser, Deceiver, epoxy baitfish, using every retrieve I could think of — but not a single bump. Can you help me understand what was going on?”

When I’m giving my “Trout Fishing for Stripers” presentation, this is the point where I reference highly frustrated anglers like this one. Scenarios vary, but the solution remains the same: it can be found within traditional trout and salmon tactics and presentations.

Let’s break this down. First: the last fly I’d use for this situation would be a dumbbell eye-weighted pattern. Just as you wouldn’t cast a tungsten cone head bugger to trout that are sipping tiny BWOs on the surface — please tell me you wouldn’t — nor should you plumb the depths with Clousers when the striper action is clearly on top.

So which pattern(s) to use? Well, what are the bass eating? This time of year (May, northeast waters) I’ve got a 20-spot on grass shrimp or clam worms or tiny minnows…essentially something small. Most Deceivers I’ve seen are far bigger than 1-inch long, so that pattern’s not a good choice, either. If it were me I’d fish a team of three, and those small baits I mentioned would be a good place to start.

Droppers are the fastest way to find out what the fish want.

Finally — and here’s where the treasure is buried — let’s talk about presentation. We have a pretty good idea of what’s being eaten, and how the stripers are eating it (holding on station, feeding in a specific area of the water column, not willing to chase). Now we need to give them the goods the same way the naturals are behaving: on a dead drift.

Think of the current as a conveyor belt. Food is being delivered into open mouths. To make that dead drift presentation, you need to be able to mend, and to be able to mend you need a floating line. Sinking lines will drag, and drag is a death sentence for the dead drift. Forget about “which retrieve?” Your only retrieve should be when you’re at the end of a drift and you’re gathering your line to make another cast. (An exception would be fishing on the dangle, but that’s a topic for another day.)

The stripers are eating. They’re sitting there just waiting to take your fly. Answer the big four questions correctly (What’s the food? How are they eating it? What do I have in my box that looks/acts like that food? How can I present it like the naturals?) and you’ll be turning frustration into exhilaration.

Tomorrow, February 19, I’ll be presenting “Trout Fishing For Striped Bass — How to catch the stripers that everyone can’t” to the South Shore Fly Casters. SSFC is a newly formed group, and they’ve done a terrific job of getting their club up and running in a short amount of time. The gig is from 6pm-9pm at Barrel House Z, Weymouth, MA. Come on down…or up…or across…and you might win this spiffy little collection in their raffle. As always, please come say hello! 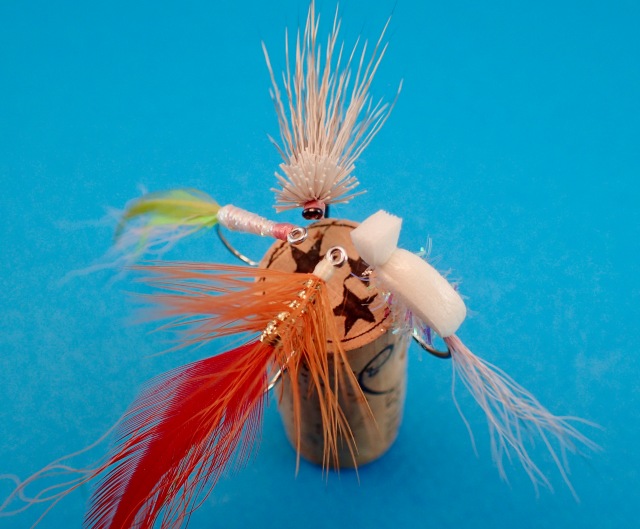 I love me some topwater grass shrimp action. Even if the bass are on the small side, there’s so much soak in: the metronome-in-molasses turning of the tide; the bottle rocket-like traces made on the surface by hundreds of mating shrimp; and the percussive pops and swirling boils of the diners.

The method was a floating line and three fly team, presented with a combination of swings, mends, dangles, and animating the flies by raising and lowering the fly rod. I took the first fish, then handed the rod over to #2 son Cam, who spent the next gleeful hour catching stripers. Cam reported that he could feel the bass sucking the fly in — the first tap — and then waiting to feel the second tap or the weight of the fish to set the hook. What a great job he did (said his proud papa). Cam had the bonus excitement of his first double hookup, a riot with two feisty schoolies in tow.

Droppers are the fastest way to find out what the fish want, and last night they wanted all of the below. The Grass Shrimp Gurgler was on point; Orange Ruthless clam worm in the middle. If you’re not fishing droppers during small bait/lots of bait events, you are missing out on a proven, strategic advantage — not to mention plain old fun. You can read more about how to tie and fish dropper rigs for stripers here.

My striper fishing cycle goes through an almost ritualistic pattern, following bass and bait to certain spots at certain times of the year. May and June are always a good time to target stripers feeding on tiny grass shrimp in the many estuaries along the Connecticut shoreline. These diminutive crustaceans swarm to mate, and the stripers know that they’re there, literally queuing up to feed on them. Throw in some clam worms and smaller baitfish like mummichaugs and you’re got a veritable saline smorgasbord.

I’ve been trying to expand my menu of usual places, so last night I ventured out to try two new locations. Both had grass shrimp and stripers. The fish weren’t very big — 16″-20″ — but they weren’t easy to catch, and I like a good presentation puzzle. Wouldn’t you know that I caught my first one when I wasn’t paying attention. My rod was tucked under my arm, flies dangling in the water below me while I was trying to figure out a murderous eddy, when WHACK! Once I had the drifts calculated, the takes began in earnest.

I didn’t shoot many photos — we all know what a school bass looks like — but this is the sweet silly who took the fly on the dangle. My apologies for the focal challenges.

Droppers give you a strategic advantage when there is a multitude of tiny bait in the water. Last night’s rig: a micro Gurgler, Simpson’s Hairwing Shrimp, and an Orange Ruthless clam worm. For perspective, the Ruthless is 2″ long. The bass liked all three flies, the clam worm in particular.