A quick in-and-out trip with #2 son Cam last night to a favorite grass shrimp mark. The water was loaded with bait doing the mating dance. Sadly, assembled diners were few and far between. Whether it was the waxing gibbous, the cold front, or just not our night, pops were at a premium. We managed one small bass and the tiniest shad I’ve ever landed. On the plus side, these father-son outings feel really good. And there’s something about standing in a marsh in early summer soaking in the midnight moonlight that restores one’s soul. We’ll get ’em next time.

First, I’d like to apologize for the lack of recents posts. Busy, busy, busy is the word. I’m hoping to clear my plate by early June so I can get on the water and tell you about it. But I did manage to venture forth last night with #2 son Cameron for a grass shrimping expedition. We fished a secluded tidal marsh. Conditions weren’t ideal — I’d like it a little warmer — and I was concerned at the start by the lack of visual and audible feeding tells. I needn’t have worried. Once the feeding began, it grew exponentially, and we were surrounded by the cacophony of pops, splashes, swirls, and sharp reports.

Nonetheless, the fishing was tough. We dropped a few, landed a few, but the number of hits was not commensurate with the number of stripers present. So it goes when you have thousands of bait targets in the water. We fished a three-fly team consisting of a deer-hair head shrimp on top, a Black GP in the middle, and a micro gurgler on point. Droppers are the fastest way to find out what the fish want, and last night they wanted the deer hair head fly. We spent as much time sitting and watching and listening as we did fishing, and that seemed right. When I think of all the places in southern New England where the same thing will be happening tonight, I can’t help but smile and relish the sensory treat we experienced.

Another year, another appearance in On The Water magazine‘s “Guide Flies” column, written by Tony Lolli. You’re familiar with he concept of a guide fly — a pattern that is typically simple to tie and is a consistent producer. I’d like to introduce the Grass Shrimp Solution as Exhibit A: some bucktail, a few wraps of braid, palmered wet fly hackle, and then you’re fishing. You can see the wet fly influence in its construction. I like this pattern at night when the grass shrimp are forming mating swarms, and are being carried out of an estuary on current. Make it part of your three fly team, and hang on! This pattern was originally published in the old American Angler magazine, Nov/Dec 2015, “Soft Hackles For Striped Bass.”

Here’s a pdf of the article:

Last week, while you were asleep — certainly some of you were, as the tide widows crept into the wee hours — I was banging around several marshes and estuaries looking for stripers feeding on grass shrimp. I found substantial numberqs of grass shrimp in every mark I visited, and varying numbers of bass. Grass shrimp are present year round, but they spawn when the water warms, and it’s getting to be that time of year. You can find grass shrimp swimming around if you shine your light in the shallows, but they mostly prefer to skulk along the bottom. They’re translucent creatures, so they’re not as easy to see as, say, a green crab. Their eyes reflect your headlamp beam, so that’s an easy way to spot them.

I almost always fish the grass shrimp swarm with a team of three. The patterns vary, and sometimes I’ll throw a clam worm like the Orange Ruthless into the mix, but last week I fished a deer-hair head on top dropper, a black General Practitioner on middle dropper, and Micro Gurgling Shrimp on point. I took fish on all three flies, although I was intrigued that I only caught bass on the black GP on the one night when I had bright moonlight. (The lessons are never-ending.) The fish weren’t very large — 20″ was the best I could manage — but I could tell from some of the feeding pops that there were bigger bass around.

My striper fishing cycle goes through an almost ritualistic pattern, following bass and bait to certain spots at certain times of the year. May and June are always a good time to target stripers feeding on tiny grass shrimp in the many estuaries along the Connecticut shoreline. These diminutive crustaceans swarm to mate, and the stripers know that they’re there, literally queuing up to feed on them. Throw in some clam worms and smaller baitfish like mummichaugs and you’re got a veritable saline smorgasbord.

I’ve been trying to expand my menu of usual places, so last night I ventured out to try two new locations. Both had grass shrimp and stripers. The fish weren’t very big — 16″-20″ — but they weren’t easy to catch, and I like a good presentation puzzle. Wouldn’t you know that I caught my first one when I wasn’t paying attention. My rod was tucked under my arm, flies dangling in the water below me while I was trying to figure out a murderous eddy, when WHACK! Once I had the drifts calculated, the takes began in earnest.

I didn’t shoot many photos — we all know what a school bass looks like — but this is the sweet silly who took the fly on the dangle. My apologies for the focal challenges.

Droppers give you a strategic advantage when there is a multitude of tiny bait in the water. Last night’s rig: a micro Gurgler, Simpson’s Hairwing Shrimp, and an Orange Ruthless clam worm. For perspective, the Ruthless is 2″ long. The bass liked all three flies, the clam worm in particular. 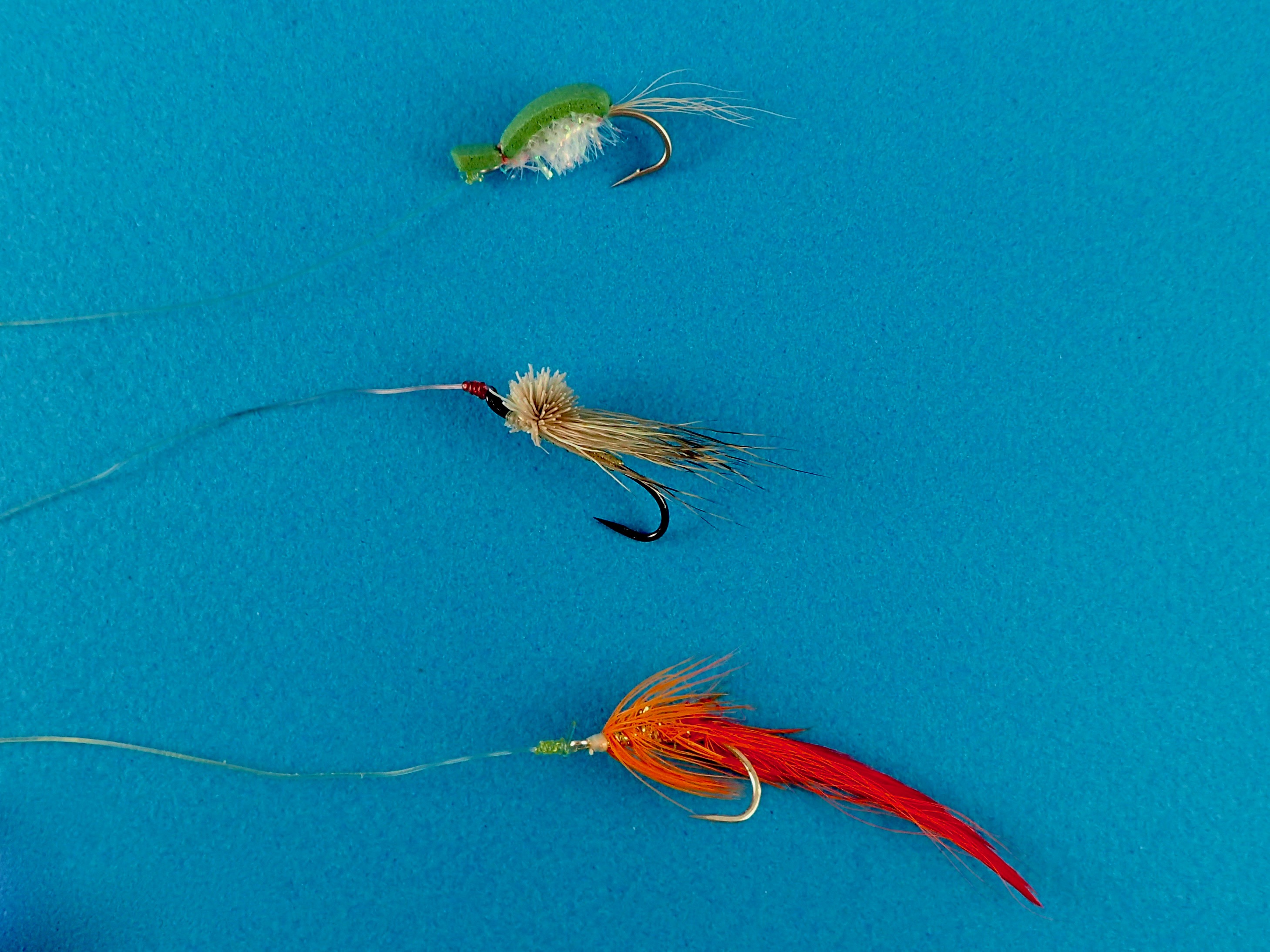