I guided Don yesterday for four hours mid-though-late afternoon. His goal was to work on wet fly fishing, and we had some great stretches of water to ourselves in and out of the Permanent TMA. Water was 225cfs, an excellent wet fly height, with a hint of stain, no doubt from storms upstream. Spot A produced two fish, a swing and a miss, and some finks that wouldn’t take. Spot B was a disappointing blank. Spot C held some players, and we had fun fooling them with the Hackled March Brown. While it was a very fishy feeling day, the hatches were terrible. I’m being generous by giving them a 1 on the 1-10 scale. Still, Don done good under some truly tough conditions. He’s going to be a dangerous wet fly machine.

Skunk’s off with this lovely rainbow. Check out that pink band! This fish was in great condition. 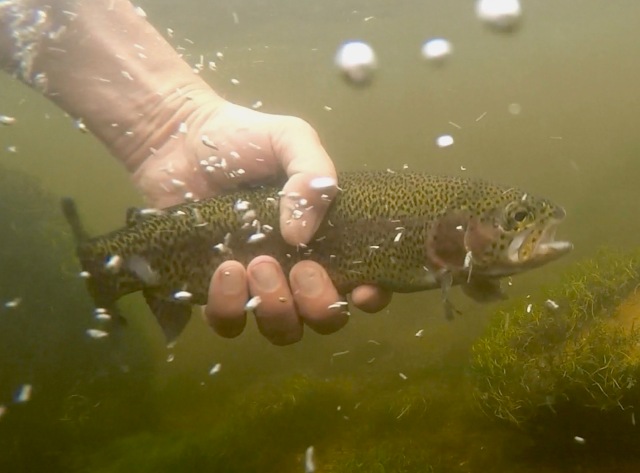 Gotcha. I love these smaller wild Farmy browns. See you in a couple years, OK? 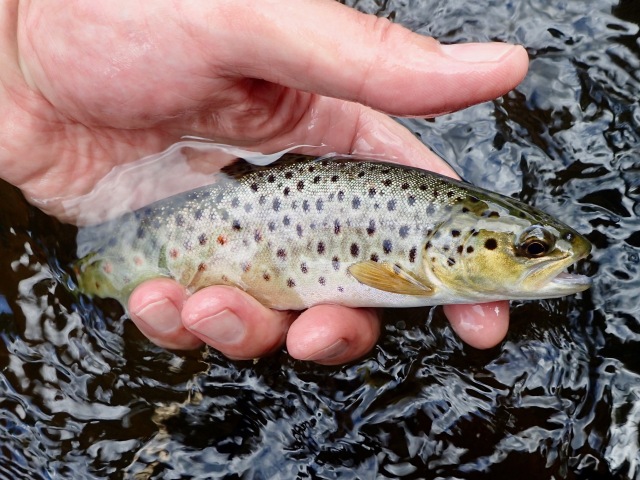 I guided Stephen Wednesday afternoon. We fished within the Permanent TMA from 2:15-6:15PM. Water was 280cfs and plenty cold. I wish we had a better hatch — there was no consistent hatching (and thus, no corresponding consistent feeding). Still, we managed to stick a bunch of fish. Best of all, we had the entire mark to ourselves, an increasing rarity on what has become a crowded destination river.

Check out the big wet fly brain on Stephen! This was not an easy fish to catch — it was haphazardly rising in some in-between water. We got nothing on our first three drifts. Surprise on the fourth! In my experience, if a trout doesn’t take the wet on the first pass, he’s less likely to take on the second, and even more so on the third. Thankfully, I don’t need to be right. Middle dropper was the selection, a Partridge and Light Cahill. 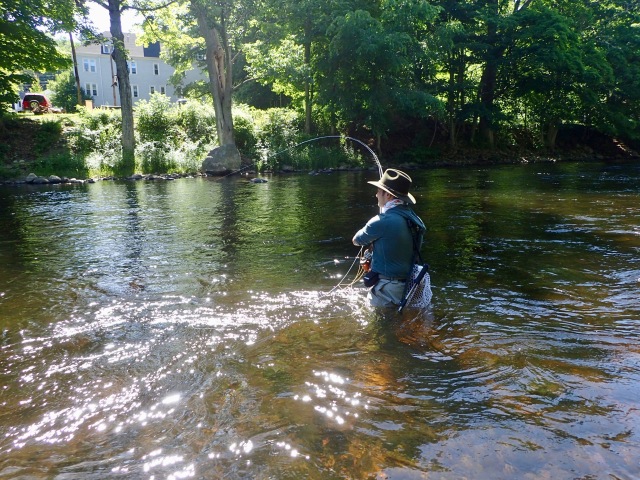 We spent most of the session working on wets, in particular casting and presentation. Even though there was no sign of trout taking duns off the surface, we capped off the day with some dry fly fishing, again with the emphasis on casting and presentation. I also turned Stephen on to the The Usual (you’ve got a bunch a creamy colored ones from 16-20 in your box for sulphurs, right?). As you can see, the trout got turned on, too. Great job, Stephen! 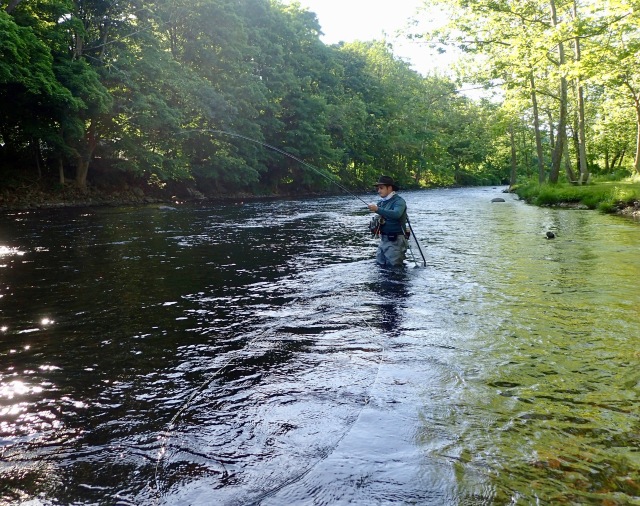 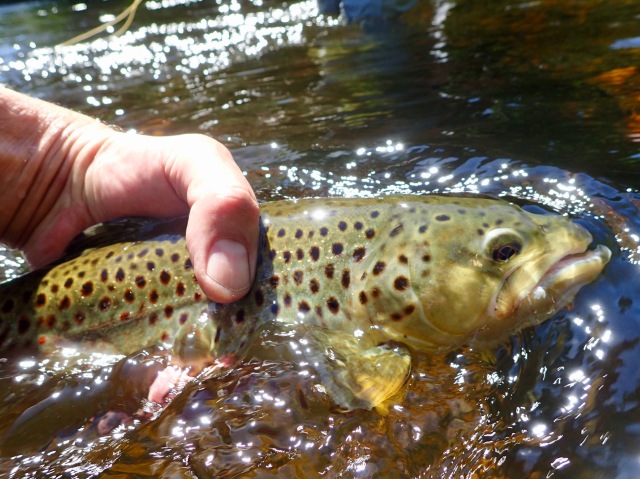 The Hackled March Brown is one of my favorite big fish wet flies. Long time readers may recall the first time I wrote about it — you can read that piece here. I don’t have much to add, other than this has become a supremely reliable pattern for me when the Isonychia are flying. (Next time you’re fishing sulphurs, and you hear a rise that sounds like someone threw a bowling ball into the river, betcha your lunch money it was a trout eating an Iso.) The Hackled March Brown is almost always my point fly on a three fly team. Fish it this summer and you’ll see why I recommend you tie it on a 2x strong hook.

“March Brown” is a name you see attached to a lot of different wet fly patterns. Some of them are caddis; others, mayflies. This spider is intended to represent the latter. I discovered it on page 116 of Sylvester Nemes’ Two Centuries of Soft-Hackled Flies. It was originally published in 1936 in an English book, Trout Fishing From All Angles.

The Farmington River is not known for its March Browns; while we do experience that hatch, it’s not on the level of, say, Hendricksons or Sulphurs. But we do have a good showing of Isonychia, and I have taken to fishing the Hackled March Brown spider in the late summer to represent those substantial mayflies.

Last August, I was fishing a snotty run that was studded with boulders and pockets. There wasn’t much going on hatch-wise, and I had the Hackled March Brown spider as the point fly on my team of three wets. The hit was one of unrestrained violence and brutality, such that it ripped the line from my hands. The trout went immediately on the reel; I never saw it until I was able to coax it into the shallows. Over twenty inches long, it was my biggest trout of 2013. 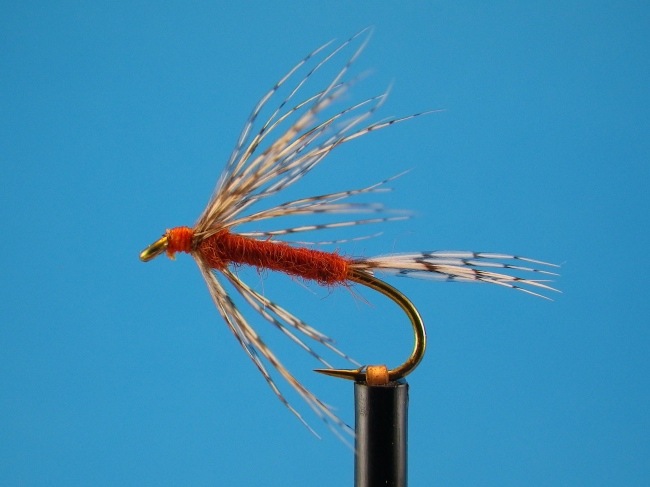 Tying notes: A straightforward, simple fly to tie. The original calls for a body of “hare’s ear dyed red ant colour.” I have settled on “rust,” and the trout seem OK with it. You could make the body a little buggier than I have here, but I like this fly with a thin profile. There are a multitude of brown feathers on a standard partridge skin; they’re located along the back of the bird. 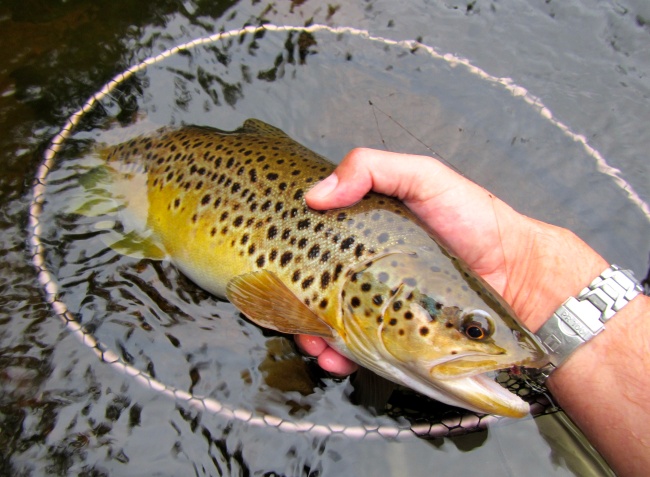