Toby Lasinski and I spent a few hours Saturday night banging around the shores of LIS looking for stripers. It was a slow night, with only one fish to hand, silvery sub-slot bass that nailed Toby’s surface swimmer. Not a touch for me, fishing a Rock Island flatwing/bucktail, and then a deer hair head whatchamacallit. There’s not much for me to tell, other than I saw some new water and got in some casting practice. (OK, the company and the cigar were pretty swell, so that counts for something.) Every day is different, and at some point this slowness will surely change. At least that’s what I keep telling myself.

I fished for 90 minutes today at a very popular late fall spot. Lots of bass around — the spin guys were cleaning up — but I wasn’t getting my fly where it needed to be, which was down deep. Dagnabbit, I left my bag of 3/0 shot in the car. Two sections of T-11 (totaling 10 feet) and a leader shortened to 3 feet solved the problem, along with some upstream casts and active mending. When my fly was ticking bottom, the bottom often fought back. All shorts, but some of them put up a good fight in the current. Wow, the wind! Gusts over 20mph made me glad I was casting with/across it. The dredging is still going on, but any commotion caused by tugs and barges didn’t seem to bother the fish. A glorious day to wet a line and catch a few stripers (and a bonus shad).

No photos, because you all know what a schoolie looks like. You’ll have to settle for a blast from the past on a warm summer night a few years ago…

Why are floating lines so underused for striped bass fly fishing? Are intermediate lines  truly versatile? These questions and more are answered in “Mainly Misunderstood,” and you can read all about it in the current (May/June 2017) issue of American Angler. If you’re looking to open the door to a whole new world of presentation options, the floating line is the antidote to the mind-numbing metronome of cast-and-strip.

If you want to catch keeper bass like this with flatwings fished on a greased line swing, you’re gonna need a floating line. 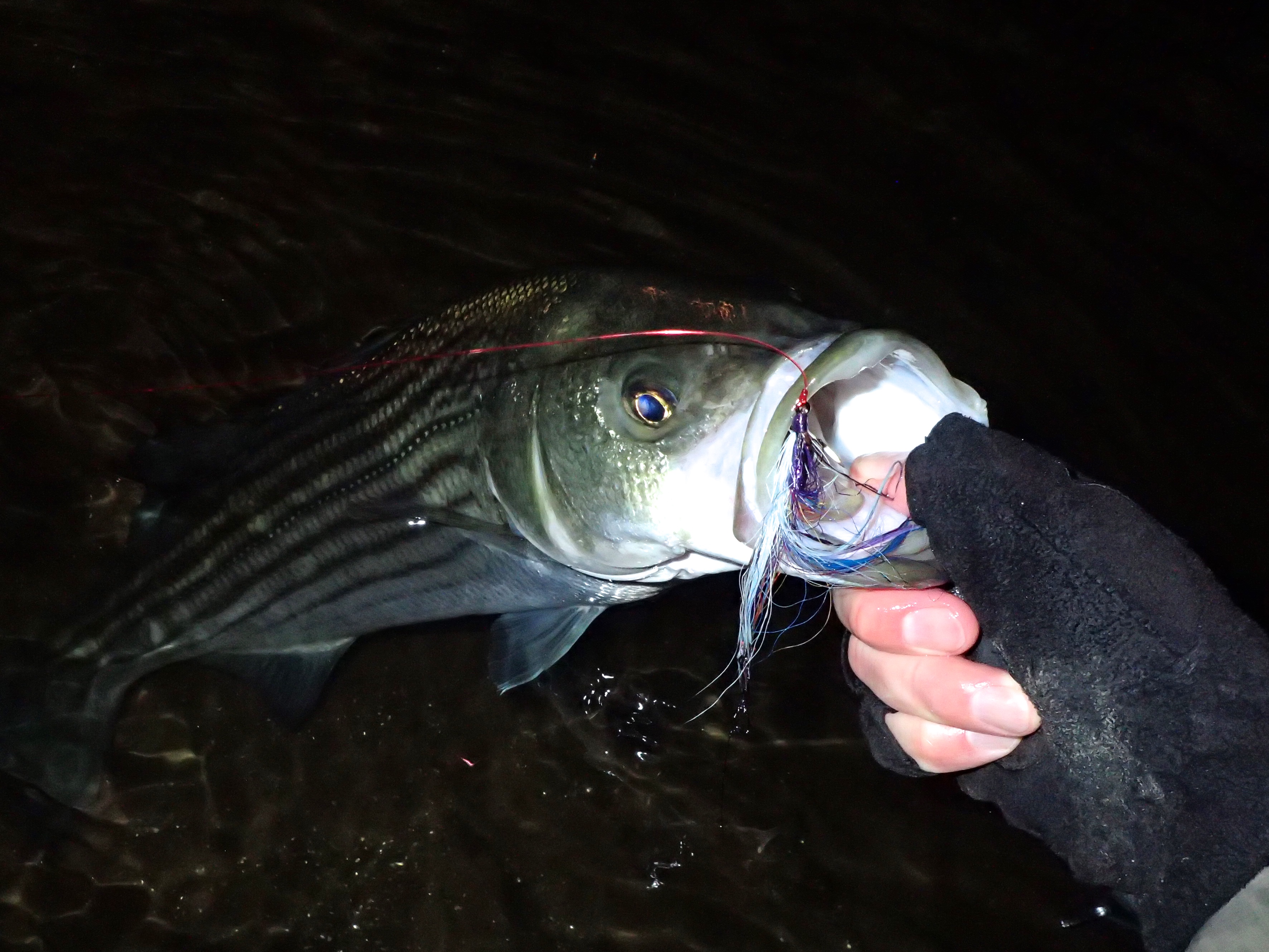 I love fishing floating lines in surf around structure. 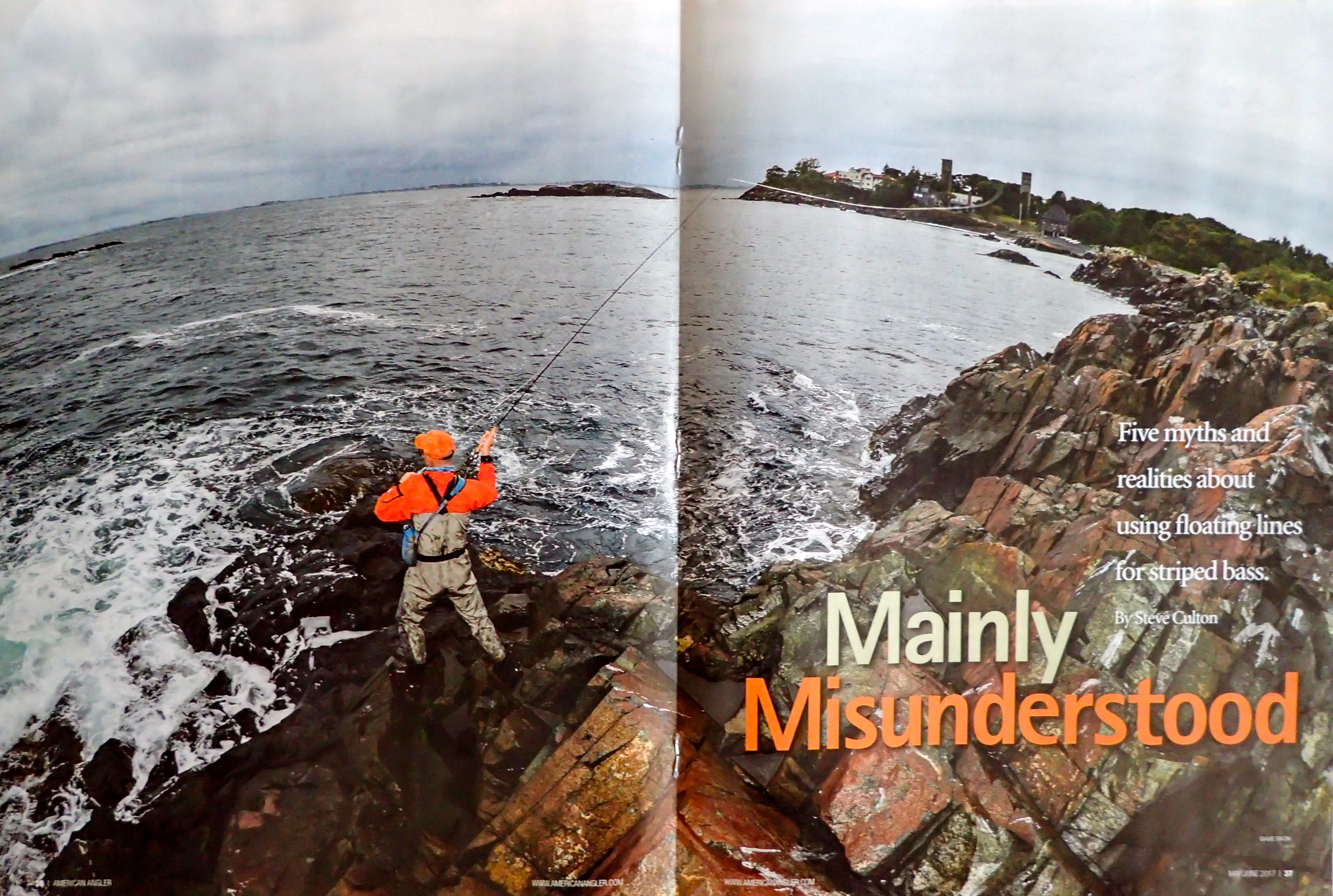 Like Loading...
I see it all the time on internet forums. Someone wants to know what’s the best line to use for striped bass: floating, intermediate, or full sink. They get many responses, and it’s nice that people want to help. Unfortunately, there’s usually some bad information in the mix of suggestions. And it almost always involves a floating line.
There is one frequent flier that dominates the bad advice airspace. It appears so regularly that it commands a gospel-like gravitas. Like any good urban (or in this case, saltwater) legend, it gives the reader permission to believe. Its exact wording is a variation on this theme: “It’s hard to stay in contact with your fly in waves or surf or a rip with a floating line.”
It baffles me. Because I don’t have any trouble maintaining contact with my fly when I’m using a floating line.
So, anglers who use floating lines in the surf can be placed into two groups. Those who have trouble staying in contact with their fly. And those who don’t. One is a dead end, a self-fulfilling prophecy of you can’t. The other is full of wonder and possibilities. Which group do you want to be in?
Before you answer, I’d like to tell you a couple of stories about fishing in the surf with a floating line.
Last summer, I fished on Block Island twelve hours before Hurricane Arthur hit. Anyone who is familiar with advance hurricane swell in New England knows that the breakers can be impressive. Even so, the waves that night were not what surfers would call gnarly. When I arrived at my spot on the southeast side, the swells were a very manageable three feet, with occasional four-foot sets.
I was fishing a boulder field, and I was mystified by a small group of rocks that kept poking their tops out of the waves. I couldn’t remember them ever being there. In one of those well, duh, moments it dawned on me that those weren’t rocks – it was a school of stripers, seemingly aware of what was approaching, and eating while the eating was good.
On my first cast with the floating line, the sand eel fly settled into a trough just to the right of where I reckoned the bass would be waiting. I hadn’t accounted for the wind, which had been picking up since the afternoon. Still, the line snapped to attention on my first strip, and a couple minutes later I was releasing a barely sub-legal striper back into the Atlantic. This went on for the better part of an hour; the only reason I stopped was because I didn’t like beaching the fish on the rocks in an exponentially increasing shore break. I hated leaving a school of active feeders, but I knew it was the right thing to do. I tucked the point of my Big Eelie into the hook holder just as the first wave of tropical rain began to tattoo my jacket hood.
~
Striped bass don’t read internet forums or hang out in breachway parking lots. This fifteen-pounder was part of school that was feeding in a strong rip. The bait, sand eels, was trapped between the rip and the shore and the stripers were feeding with impunity. It was one of those magic moments (rather, episodes — it lasted close to 90 minutes) where it was a fish on every cast. You guessed it. I was using a floating line.

~
Flash backward several years. Same island, different wave conditions. Our plan was to fish all night, and the trip started poorly. A ferocious north-northeast blow turned the harbor of refuge in Point Judith into a maelstrom of foam and chop and weeds. The ferry was pitching and rolling even before we cleared the breakwater. Once safely ashore, the normally sheltered Great Salt Pond provided no relief from sustained winds of twenty miles per hour. That banshee howled all night; it’s the only wind I can ever recall that made my ears hurt. One keeper bass was all I could manage. By five in the morning, beaten and bowed, I wearily trudged across the sand to one of the west side beaches for a desperation look-see.
Try to picture what the pre-dawn ocean looked like after nearly twenty-four hours of winds gusting to thirty-five knots. White-capped anarchy comes to my mind. I had no motive other than what-the-hell desperation when I made my first cast into a trough about twenty feet off the beach. Seven casts later, I had landed eight stripers. I had switched over to a full-sink integrated line in the middle of the night, and those first fish were obviously sitting in that trough, or cruising the shore break wash. But when I looked one hundred feet down the beach, I witnessed a scene that every striped bass angler dreams about.
It was an all-out blitz. Sand eels were spraying in desperation, their flanks reflecting the orange of sunrise. Seagulls excitedly chattered overhead, seemingly more stoked about the carnage than I was. And somewhere underneath, there were stripers. Untold numbers of them, rolling on the bait as they gorged themselves on an all-you-can-eat breakfast buffet.
I quickly swapped out the full sink for the floating line and a seven-foot leader. I don’t know how many stripers were in the school. I suspect it was hundreds. They ranged in size from eight to over twenty pounds. The blitz was taking place about sixty feet off the beach, and the wave chop beneath the floating line was substantial. Yet, for two hours it was bass after bass after bass. I caught them on the strip and I caught them on the dead drift. I lost count after the first dozen. The only reason I left is because I had a ferry to catch.
~
This all began with a question. So let’s close with one: If it’s so hard to stay in contact with a fly in waves with a floating line, how did I manage to catch all those stripers?
For me, the answer is self-evident. Perhaps your answer is still out there, on the water, waiting to be discovered. I encourage you to find it. As an old Rhode Island sharpie once said, “The path of the obvious is perhaps the most difficult path of all to find and unravel, but it is well worth the effort and the results are measurable in pounds not inches.”