As you may know, I am currently occupied with getting ready for my oldest son’s wedding. In lieu of new material, I’m recycling some of my favorite posts from years past. Let’s continue on the steelhead kick (man, I really want to tie into some fresh chrome!). Six years after its publish date, Soft Hackles for Winter Steelhead remains relevant; I still use these flies, and whether swung or dead drifted along the bottom, they still catch fish.

Those of you who fish for steelhead know how maddening the pursuit can be. When conditions and fish are cooperative, it’s hard to imagine having more fun while wearing rubber pants. When things don’t go well — well, you quickly reacquaint yourself with your cache of four-letter vocabulary words. This year’s November steelhead trip with #2 Son Cam offered a taste of both worlds. The first day I dropped three fish and Cam didn’t have a touch (along with suffering the indignity of leaky waders). The second day I scored a couple fish — it’s always a relief to get off the steelhead schneid — but Cam’s woes continued. He dropped a handful and as the sun began moving toward the western horizon things were looking grim. Then — on literally the last cast — Cam brought a sturdy buck to hand. What a finish! Or, as Alec Baldwin would say, “Coffee is for closers only.”

Give that young man a prize! You can read the full report here.

As promised, here’s a pre-currentseams oldie but goodie. The events took place in December 2009, my first real winter steelheading trip. It’s amusing now to read this over a decade later, recalling how raw I was and little I knew about hooking and landing steelhead. I’ve included a link to a video old fishing buddy Todd Kurht made where you can see the battle and the beast. I hope you enjoy this little slice of steelhead dreaming,

“That Boy is a P-I-G pig!” With apologies to Babs from Animal House (and the steelhead involved) he truly was.

We started out on a beautiful winter morning with moderate temperatures and plenty of sunshine in a pool I had never fished before. The water was low (>350cfs), cold (33 degrees), and crystal clear. I had high hopes for this trip, my first winter steelheading venture, and I thought the conditions would only help us out. I sparked up a churchill to start enjoying on the walk down to the river. An hour later, I was still puffing on it, fishless. Bob had moved to spots elsewhere, and Todd and I were beating the water thoroughly. I just didn’t know this spot well. I spent a half hour around a really sexy-looking stump tangle before wading over to discover that the water was much shallower than I thought.

Then, I waded though a deeper channel that I didn’t know was there, and realized that that was where I should have been fishing (later confirmed by Trapper, one of the good guides, who shared the pool with us and his client). But, such is the learning curve on new waters.

I had tied on an Opal Blue Estaz egg and was fishing a current seam along the far bank when the indicator paused. I set the hook like I had already done dozens of times today, only this time the rig didn’t come flying out of the water. It stuck. And then the water boiled up 50 feet away from me.

I could see it was a good sized fish, but I didn’t have the full picture until the first run. Criiiiiiiiiiiiiiiiink! The drag sang out in the warm December air. The fish rolled again, and I could see once more that it was a good fish. Todd was on the scene by now, and confirmed it was a sizeable steelhead. And that’s when the line went slack.

Well, I told myself, that’s why they’re called “steelhead.” At least I had hooked a big fish, and at least I had my adrenaline rush for the day. Can’t win them all.

So why is my fly line moving upstream at a very rapid pace?

You must understand that I have a minimal corpus of knowledge when it comes to steelhead. “Rookie” would be accurate. I had forgotten how quickly they can turn on a dime and shoot upstream. The last time this happened was the first steelhead I hooked over a year ago. I lost that fish. Frantically, I stripped and reeled line as the fish passed me. Yes! Still on. I reset the hook as hard as I dared, and the fish dashed downstream at a breakneck pace, peeling line off the reel like I’d never experienced.

Again, understand that my experience base of fighting a fish like this on single digit test tippet is nil. The steelhead melted through the flyline in a matter of seconds. I was into the backing good. Of course, Todd is kibitzing the whole time, providing moral support, and telling me this is a great fish. I kept thinking, “Todd, you just put the whammy on me.” I decided nothing ventured, nothing gained. I was uncomfortable with well over a hundred feet of line out, so I started to reel in. Every time I felt weakness on the other end, I reeled in more. I regained the majority of the line before the fish blistered off on another long run. But all this oxygen-burning fury was taking its toll. And for the first time, cigar clenched in my teeth, puffing away, I felt good about landing this beast.

Finally the end was in sight. I had the fish in the shallows. At this point I felt if it broke off, I had at least achieved a moral victory. Todd came up behind the fish, tailed it, and a prize that was measured in pounds, not inches, was ours.

Talk about good fortune: the egg fly was dangling from a paper thin section of tissue in the steelhead’s mouth. We took some pics then released it, watching it porpoise as it skulked back to its lie. Not a bad steelhead to be your first on a fly you tied. And here it is.

This caption was not part of the original piece, but the photo was. I believe this is still the largest steelhead I’ve landed, and I’d estimate it to be about 15 pounds. You can see the fly dangling by a thread of tissue — such is the case when planets align and good fortune is in the forecast.

I went and sat on the bank to savor the rest of the cigar. I was shaking. I think I giggled out loud for a half hour.

The battle preserved on video. Maybe I’m being too hard on myself, because I think I at least look like I know what I’m doing. The main even is from about 0:23 through 1:03.

If there’s anything worse in fishing than being cold and miserable (OK, throw in not catching, too) I’ve yet to experience it. That’s why Under Armour’s Cold Gear Base Extreme Leggings are hands down the best lower body bottom layer I’ve ever owned. I bought mine in 2018; this year’s model is called the ColdGear Base 4.0 Legging. 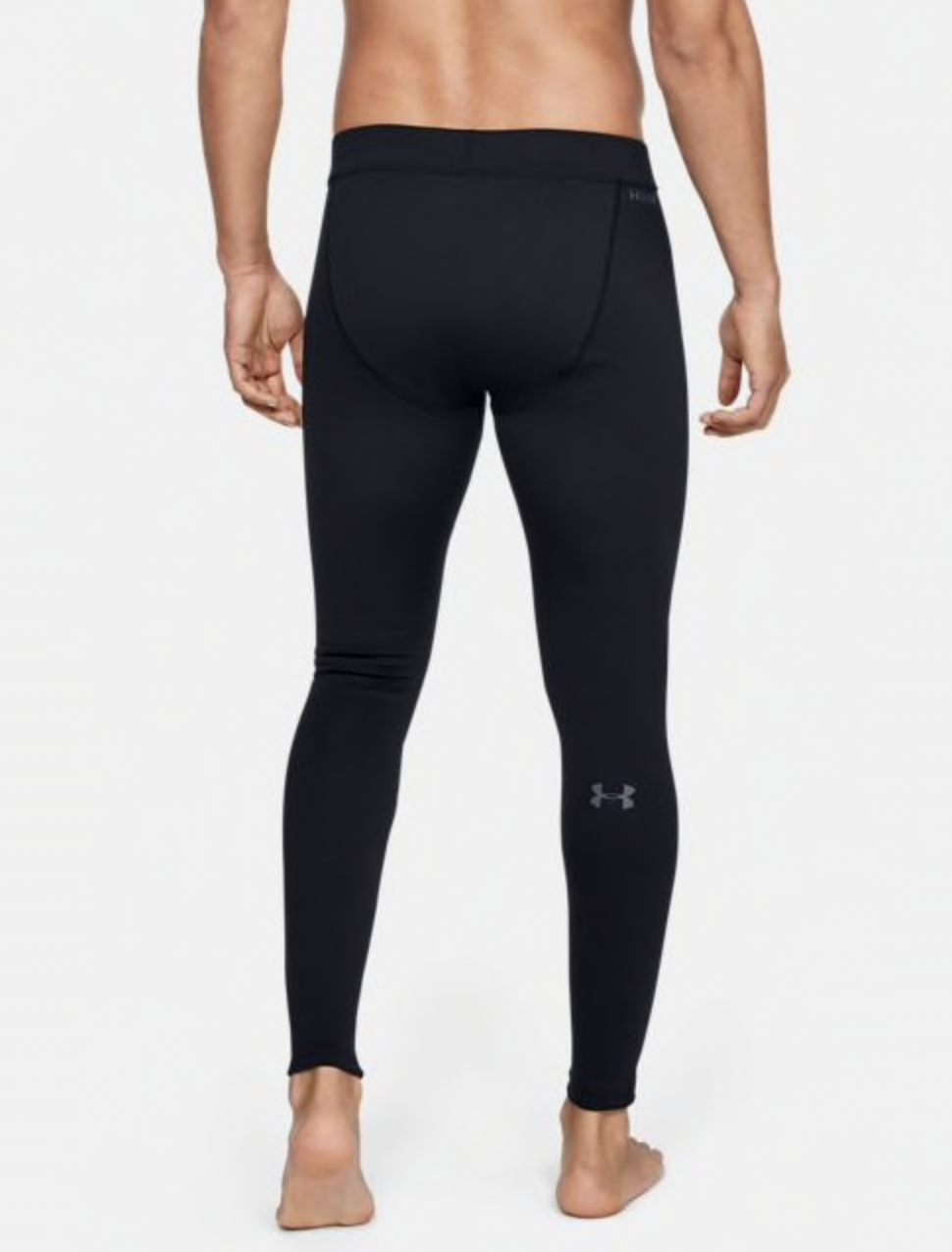 There’s a lot to love, starting with the fact that these things actually work. I’m the kind of guy who runs cold 24/7, so already I’m at a disadvantage before I step into the water. I wore these last year in all kinds of miserable conditions with a fleece pants overlay and stayed mighty comfortable in my 3mm neoprene waders.

Features you may be interested in: UA Scent Control Technology (and let’s be frank: that’s something we all could use in our nether regions); soft, brushed grid interior (very comfortable); fast-drying wicking material; working fly (yup, nature is going to call at some point). Be advised that the “Find Your True Fit Size” app on the UA site is fallible; it told me I was an XL and they hung on me like a cheap suit. I swapped ’em out for an L and we were warm and happy.

Water’s cold, steelhead bite’s hot, legs are just right with the Under Armour ColdGear Base 4.0 Legging (hiding somewhere beneath it all). If you fish in cold water/cold weather conditions, you need these leggings. 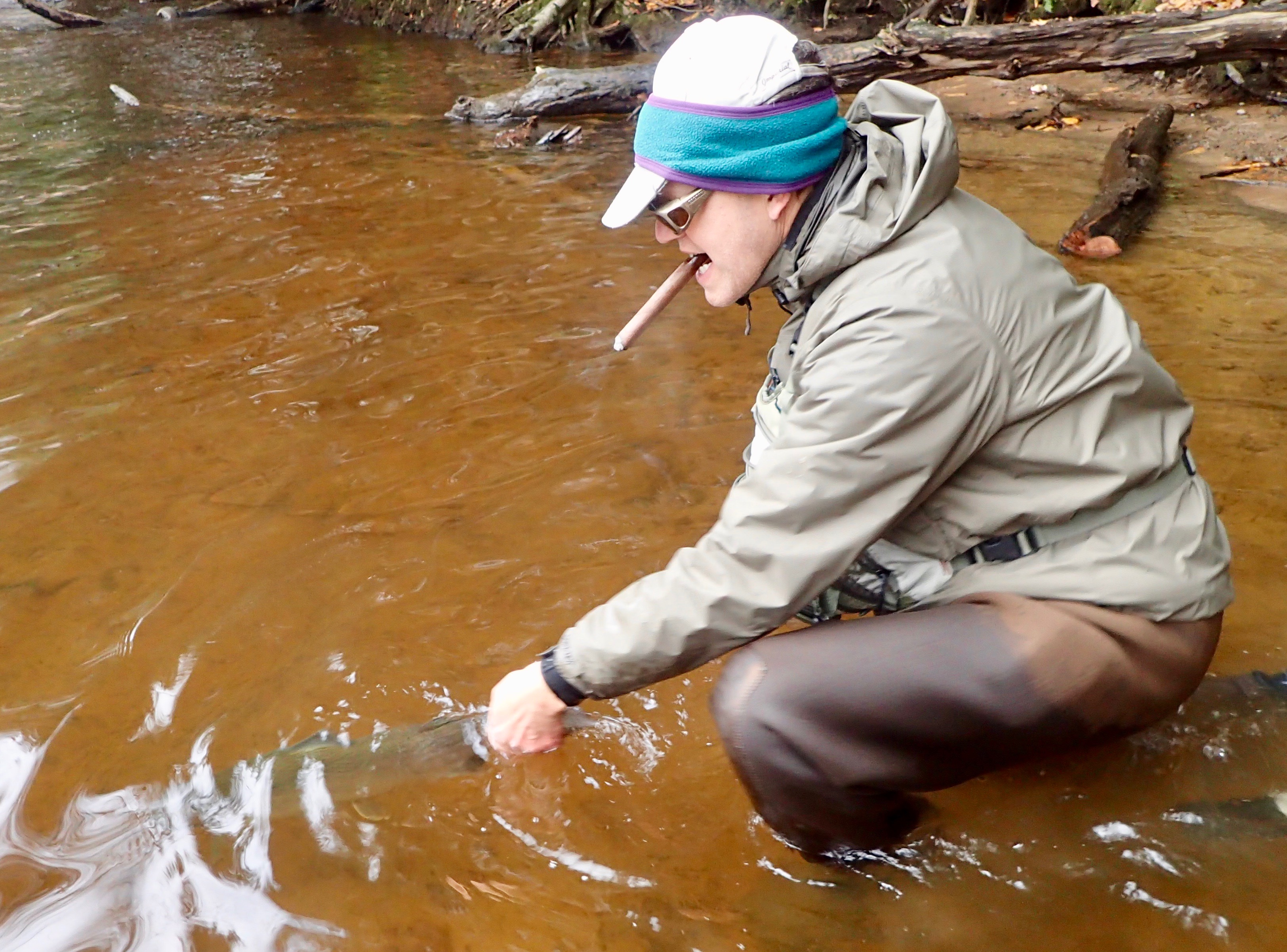