I fished three marks in SoCo last night, and while the striper action was slow, the bait story was consistent: smallish to tiny, and lots of it. Confirmed sightings: silversides, anchovies, peanut bunker, and I may have seen a stray finger mullet.

My night began in the surf, but the meatball factor (bright headlamps used early and often) and a lack of action had me moving to Spot B, an estuary with a moving tide. Lots of bait, too few marauders.

I finished the evening at Spot C, some skinny water on flat, just as the tide began to flow out. Lots of worried bait in this location, and it’s a perfect place to fish a team of three. I had 2″ long Ray’s fly on top dropper, a Magog Smelt bucktail in the middle, and a micro Gurgler on point to do double duty as a suspender and waking fly. I was disappointed with the number of assembled diners, but it is what it is and you do your best. Two fish to hand in 45 minutes and I was satisfied, abetted in no small amount by a Rocky Patel Vintage 1990 corona and a come-from-behind Mets victory.

In case you haven’t seen it, here’s a quick refresher.

Long before breathable waders and UV-cured resins, fly anglers began fishing the salt for stripers. They brought with them their corpus of freshwater knowledge – and also their flies. Saltwater fly fishing (and therefore saltwater fly tying) was in its infancy. So it only makes sense that they would borrow tackle and tactics and flies from whence they came.

I have a particular interest in traditional fly fishing and tying methods, whether for trout or stripers. For several years now I’ve been tying and fishing these legacy striper patterns, and I’d like to share one of my favorites with you: the Magog Smelt Bucktail. 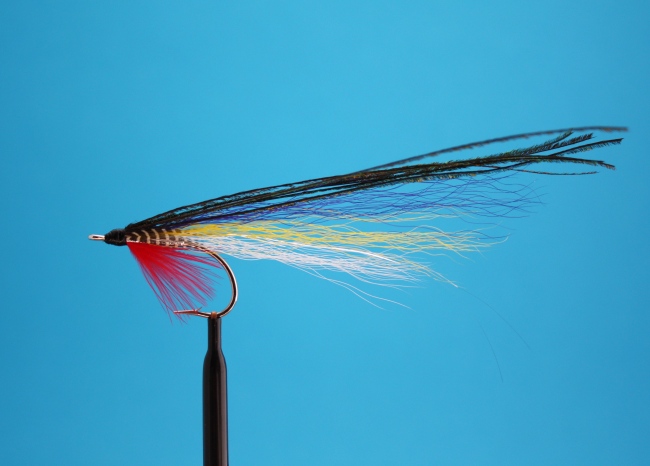 The Magog Smelt is an old landlocked salmon fly. It takes its name from Lake Memphremagog, located between Vermont and Quebec. It was the favorite striper fly of an old Rhode Island sharpie named John Abrames, who taught his son, Ken (you may have heard of him) to fish for striped bass with it. Ken in turn told me about the Magog Smelt, and now it’s one of my favorite bucktails and color schemes.

Tying notes: I tie the Magog Smelt Bucktail the Ray’s Fly format, from three to five inches long. The fly here is about 3 ½ inches. Keep each group of bucktail nice and sparse, and make each progressively longer. I treat the teal almost as a veil over the body braid. Back in the day, the old-timers painted white eyes with a black pupil on the head, but you could use jungle cock or leave it blank as I did here. I’ve never tied this fly with eyes, and the stripers love it au natural.

It would be pretty fair to say that I’ve got a jones for the Magog Smelt. The Magog Smelt is a classic landlocked salmon streamer that originated in Maine. It sports a striking color palette: white, yellow, and purple bucktail. Silver flash accents. Flowing red marabou, offset with barred teal flank and iridescent peacock herl.

Up until a few years ago, I’d never heard of the Magog Smelt. Then one day I was having a conversation with Ken Abrames about old time striper flies, and he told me the Magog Smelt was his father’s favorite fly for Rhode Island bass. So I looked up the pattern and tied a version based on the Ray’s Fly design. The first time I fished that that fly was at night in a breachway, and when I caught a striper on it, I could almost picture Ken’s dad standing on the shore, nodding in approval.

I started playing around with the color scheme of the Magog Smelt in different formats, from soft-hackle to single feather flatwing. They all worked in the salt. Then I got ambitious and tied up a 10” long, nine-feather flatwing. A substantial morsel to tempt the stripers when the big bait is in. Bold. Daring. More of a caricature of a herring than a formal portrait.

And here it is.

A closer look at a fly that fishes big, casts small.

Tying notes: Since I didn’t have the darker purple the original calls for, I used lavender saddles and some deep purple bucktail in the wing. There’s something magical about the effect created by placing the jungle cock over the teal flank cheeks. This fly is tied Razzle-Dazzle style with the flash about an inch longer than the saddles.

You can see the stiff, white neck hackle I’m using for a support along the arm of the vise. A properly constructed big flatwing like this will not be prone to fouling.