After last week’s rains placed her flows into the thousands, the Hous TMA was down to a very wadeable 988cfs. The water, however, still had a moderate stain, and it was noticeably colder than last week. Cloudy conditions with a bit of a breeze. Fished a floating line with a seven-foot leader. I tied up a yellow and white marabou articulated streamer the night before in the hopes that it would discourage the smaller fish from jumping on. That kind of worked. I still had plenty of bumps, but the foot-long fish weren’t making it much past the initial strike stage. I did manage several some-teen-inch fat rainbows that kept me entertained with their cartwheels. In the higher flows, even a mid-teens fish felt substantial. I bounced around to five different name pools, and I had action in four of them. Getting stoked for a steelhead on a streamer next month.

Fat, aggressive, and obstreperous. Just the way I like my rainbows.

Do I have something on my lip? I had confidence this streamer would work, but it’s nice to get approval from the target audience focus group. 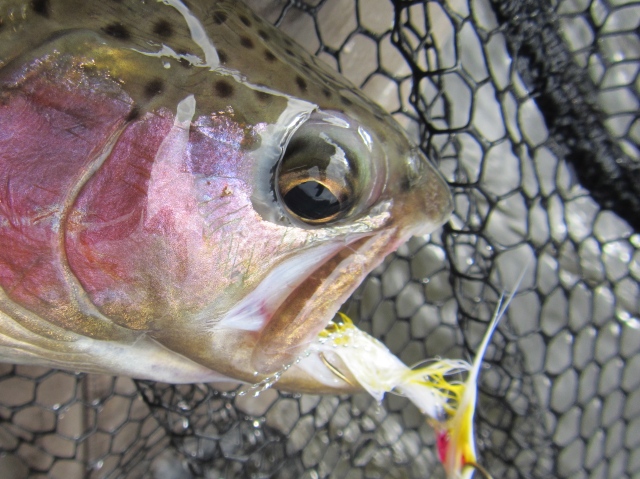