You may think it would be easy to pick out a top ten fishing memories of the year list. But it isn’t. Sometimes it’s especially difficult to choose one event as the single best moment of the year. What made that particular fish better than another? Is size the only determining factor? What about frequency of catching? Is an epic day of constant action more worthy than a single big fish? These are the questions for which I struggle to find answers. In the end, I chose my tenth Block Island All-Nighter as the #1 Best of 2020 for several reasons. First, the company: old friend Peter Jenkins of The Saltwater Edge. It was Jenks’ first BIAN, and after a slow start he killed it. While there weren’t any slot fish or better, the action was consistently good all night (I’m told by my Island spies that this was the first really good night of the season). Finally, I hadn’t done a BIAN in five years, and it was soul-restoring to get back to this treasured tradition. Cap it off with a highly satisfying breakfast at Ernie’s, and that, and Jenks would say, “makes it a win!”

I know this was a challenging year for everyone. I hope you found some solace, if not downright joy, on the water. Here’s to the great moments of 2020, and to the hope that 2021 is even better. Thanks for reading currentseams. I value your comments, questions, and passion for this wonderful sport of ours. Cheers!

Skunk’s off. Most of the stripers we caught on BIAN X were in the 20″-24″ class, but Block Island bass are a treat on the long rod at any size .

I’m currently reading Dennis Zambrotta’s Surfcasting Around The Block. As you may have read a few days ago, Dennis has asked me to contribute a chapter to his upcoming followup. It’s a little crazy to me that I’ve known about Dennis’ book for years, but I’ve never read it until now. While the focus of the book is on spin fishing the Block with plugs in the surf — and frequently surf under hardcore conditions — there are plenty of secrets that the fly angler keen on building his or her knowledge base will be able to use for their next outing, whether on Block Island or elsewhere. Here are some of my thoughts.

Color matters to needlefish pluggers. The needlefish is a primary choice for pluggers when sand eels are the bait, and the most popular color is fluorescent green. On Block I fish Big Eelies the vast majority of time, in all kinds of colors, and have never found that the stripers have a preference. But now my mind is wandering in to places of color and length. The Big Eelie in L&L Special colors is one of my favorite, high-confidence Block flies. It’s got a lot of chartreuse. Hmmmm….maybe a longer version, seven inches long, with more bright greens?….one way to find out…

Or, maybe the L&L in a Soft-Hackled Flatwing, tied about 7″ long. I really like fishing this color scheme over sandy bottom structure, like Crescent Beach...or on the Cape…

Location matters…and there are so many locations. I like to think that there aren’t too many anglers that know Block Island on the fly like I do, and then I read a book like this and realize how very little I really know — especially when it comes to locations. Part of it is that I’m a creature of habit. Part of it is that I like to fish flats and skinny water more than surf. Part of it is that it can be challenging to fish certain marks with a fly rod in wind and waves (almost constant companions on Block). But I’ve really got to explore more of these boulder fields (check out Gerry Audet’s talk on boulder fields sometime) and the mysteries they hold. In a way, Dennis hasn’t written a book as much as he’s built a roadmap. Follow it to find your own secret spot.

Tides matter. Once you’ve figured out where you’re going to fish, pay attention to the tides. There are certain marks on Block that I fish on universal tides, and others that I’ll only hit at a certain tide. Pay attention to the details in Dennis’ book and you’ll have the code cracked for you on your next outing.

Put in your time. And move around. If the bass aren’t biting where you are, give them a chance to move into the area you’re fishing. If that doesn’t work, move. One of the beauties of the Block is that everything is accessible and everything is short drive from where you are.

Okay, so the days of the multiple 30, 40, and 50+ pound bass blitzes from shore are over. (Dammit! I can’t believe I missed that. Oh, to have been a striper fly fisher on Block in the early to mid 1980s…) It’s been a slow last couple years for me for slot fish and above on Block, the opportunity still exists. Here’s a very respectable double-digit pounder on the fly from two years ago. Miss you, sweetheart.

Great news for Block Island striper fans: Author Dennis Zambrotta is putting together a followup to his classic Surfcasting Around The Block — and he’s asked me to contribute a chapter. I’m totally stoked. But jeez…I have so many good stories to tell…how do I pick just one? Not to worry. I already have a good idea about what I’m going to write about…

In case you’re unfamiliar, the original Surfcasting Around The Block is “a collection of memoirs and short stories about Block Island, surfcasting, and striped bass.” Even if you’re strictly a fly angler (like me), it’s loaded with pearls and gems. The followup will have plenty about fly fishing.

Another year, another seven days to chase linesiders in one of The Last Great Places. What each new season brings is always a mystery until you get out there, and then you can toss all the reports you’ve been hearing because they’re either spot on, nothing like that at all, or varying points of somewhere in between.

In 2017, I’d been hearing credible talk of voluminous schools of sand eels inshore and the Bass-O-Matic running on high. That sounded swell, but there were two x-factors to consider: we were coming out of the new moon into first quarter with a waxing gibbous and its bite-killing light; and the weather. Good news/bad news on both fronts. On the plus side it was cloudy most nights, so moonlight was not a factor. On the down side, it was windy. Like small craft warning windy: 20 knots sustained with higher gusts that pushed the limits of what is reasonable with a fly rod. And wind usually changes everything on the Block.

Like last year, I caught stripers every night. But the bargain of two consecutive years without a skunk was a preponderance of small fish. This was the first time in a decade that I didn’t take a legal bass out here, and I found myself longing for those schools of 15-pounders that would sit off the beach for 90 minutes, having their way with sand eels. I had two double-digit nights, then a six, then three singles, and wrapped it up with another half dozen. But 27″ was the largest bass I could muster.

Sight fishing from the beach during daylight was tough due to wind, but mostly to the clouds that made finding those elusive shadows a chore. What’s more, on the sunny days I spotted very few cruisers. I did get two fish to follow my fly, one of them a good 20-pounder, but in the end they both broke off the chase.

And then there were the Meatballs. I had enough nights where I enjoyed blissful solitude, but there were a few sessions where the Meatballs were out in force and in rare form. I’m usually the quiet sort on the water, but at one point on a certain night I was blasted so often by so many hundreds of lumens that I finally turned and barked, “Please stop shining that light on me NOW!” They left shortly after. I had a cigar to celebrate.

And that’s the thing about Block. Even when it’s bad, it can be very, very good.

I had high hopes for this fish — he went on the reel — but the tape measure didn’t lie and he came up an inch short. I mostly stuck with my usual eclectic mix of Big Eelies. This fish thought the Crazy Menhaden color scheme looked tasty. Kind of a neat stained glass effect going on in the water around him, too.

Unless there’s a specific hot spot, I always try to mix it up on the Block. I fished the east side and west side beaches, southeast side, off some jetties, in the Great Salt Pond, and — regrettably — the North Rip. I say this only because the Rip had been producing a consistent good bite if you had a spinning rod. The night I slogged out there was about the worst night for fly fishing you could imagine. The wind was rain jacket whipping-fast, and I had to cast my line backhand over my right shoulder (I’m a lefty) to shoot it into the rip, then feed line into the left to right current. So far so good. But, rats. Mung. Every cast. I took this shot when I got back to the truck. Yes, it was that hot and that humid and that foul. I love the Block, but walking a mile and a half in the sand for nothing will make anyone dour. 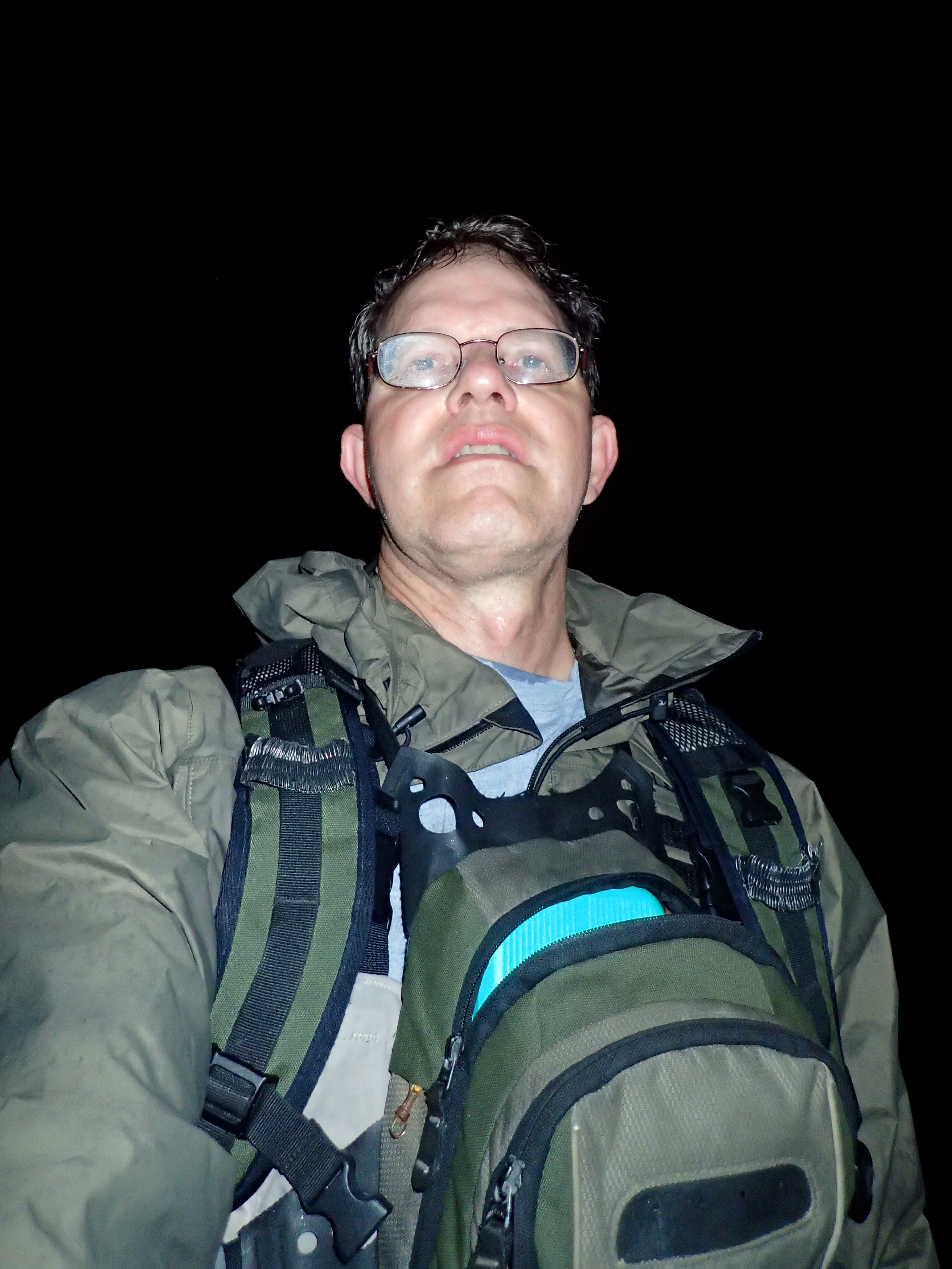 I discovered that striped bass have great camo against the sand and rocks — even when they’re dead.

A public service message brought to you by the National Spell Check Society.

On the last night I caught bass two ways. First, off the beach, where I found a school of hungry fish feeding in the moonlight; then, inside the Pond on a flat with a team of three flies suspended in the film. (Floating line, of course, for both methods.) My last two fish of the trip came as the flies dead-drifted across the flat. That building pressure I felt let me know a striper was flaring his gills to suck in one of the small sand eel flies, in this case a 3″ Eelie in olive and chartreuse. See you next year, when one of us has put on a few more pounds.

It’s the Destination Issue of MAFFG, and we’re all heading to Block Island! A nifty little primer on the island, its structure, flies, gear, and more. While this past year was (ahem) a bit of an off-year for stripers on the fly from the shore, the Block remains one of my favorite places to fish — and write about.

While I truly love answering your questions, let me head you off at the pass: no, I don’t know where you can find a copy of MAFFG. You can try contacting them through their Facebook page. And of course, let them know you enjoy my writing.

Hot off the presses. 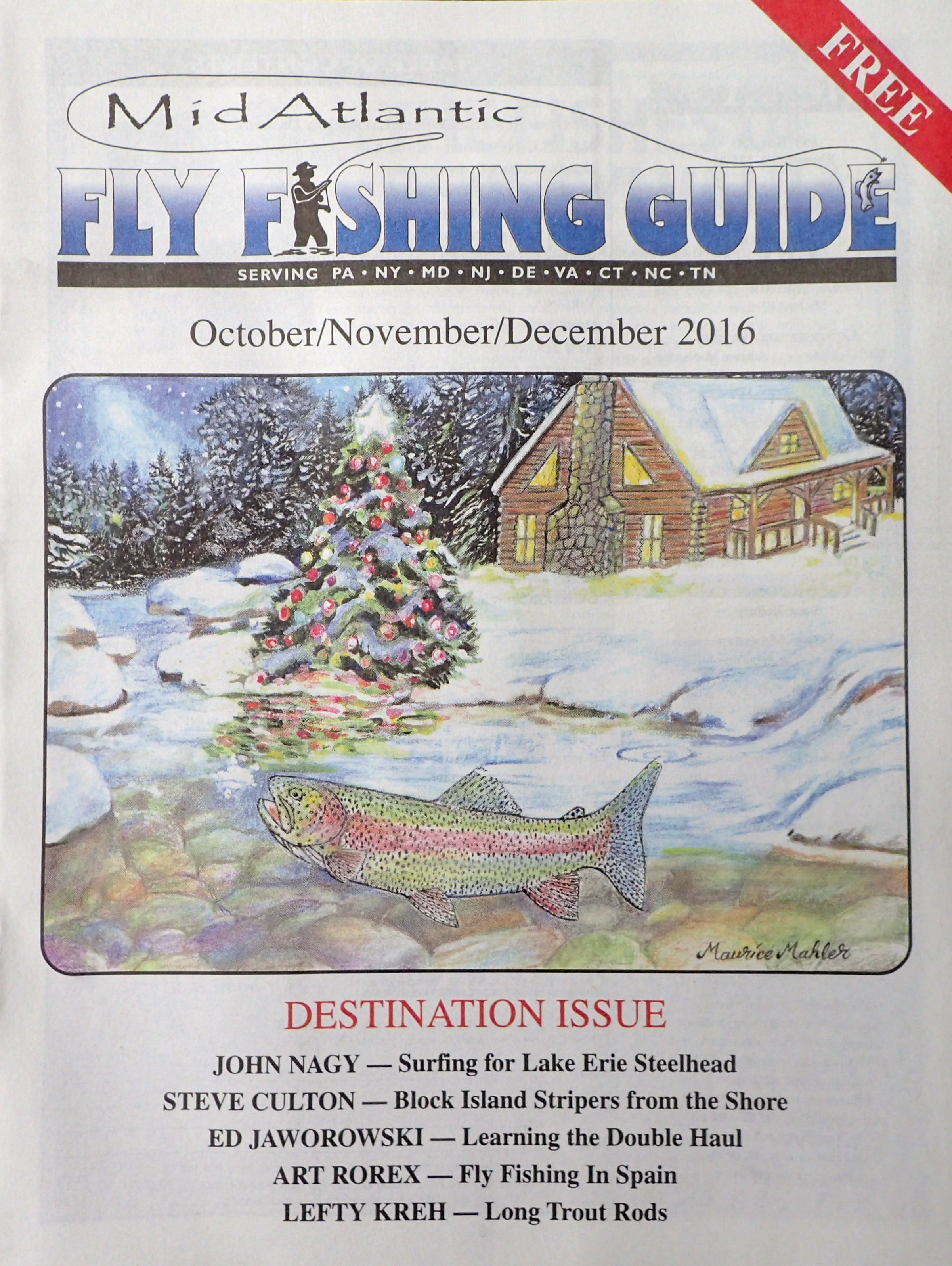