I guided Paul for four hours yesterday before the fireworks began. Atmospheric, that is — although the fishing was slow, we managed to conjure up plenty of electric action. We fished three locations within the permanent TMA and found players in all of them. The water was down to 237cfs (they dropped the dam 100cfs) but still plenty cold. Wet flies were the first order of business, and we induced a savage strike from a lovely wild brown in the snotty water at the head of a run. Upstream there were trout smutting in that difficult-to-present-to frog water along the edge of a faster current. Then I saw a moth skitter across the surface, and one of the trout snapped at it. We clipped off the SHBHPT on point and tied on a Stimulator. Three trout later, we moved to another spot. This was a very sexy run, but we had no interest in swung wets. I figured there were trout in residence, so we added a BB shot to the middle dropper knot and presented along the bottom. Ding! We have a winner, with Paul landing a gorgeous kyped Survivor Strain brown. Great job by Paul with his casting, wading, presenting, and especially his no-time-wasted landing those trout. They just didn’t stand a chance. A pleasure, sir!

The skunk was off with this lovely wild brown. Man, did he open up a can of whupass on the wet fly.

Men at work: Paul demonstrating the advantages of a ten-foot rod on the Farmington.

What the fly saw moments before the take. A good fish, Survivor Strain, well-earned. (There’ll be no pictures of anglers thrusting fish into the camera at arm’s length on this site.) 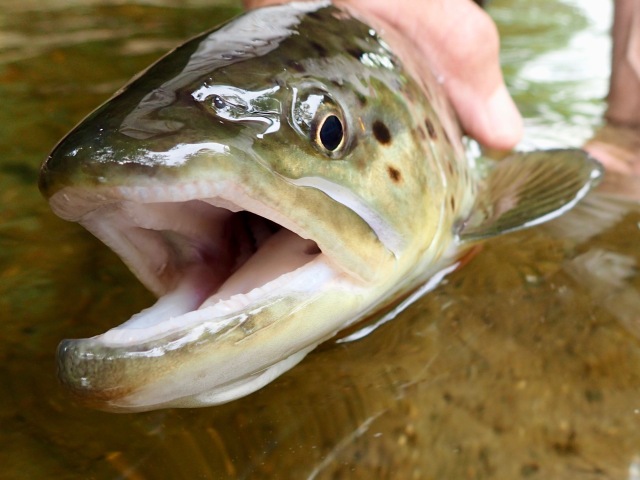