Next, a few late mini reports. Last week they bumped up the flow from the Hogsback dam. I fished the Farmington below and in the permanent TMA on Thursday. The results were poor: I hit five spots and found fish that wanted to eat in only one of them. Could have been a combination of higher water, cold water, high pressure, or just not my day. But when I guided Joe and Wayne on Friday, the fishing wasn’t any better. The weather was glorious and there was plenty of hatch activity, but we had a tough day. Both Joe and Wayne fished well and hard — in the end, the river won. We’re already looking forward to the re-match.

Third cast on Thursday. And that was it. 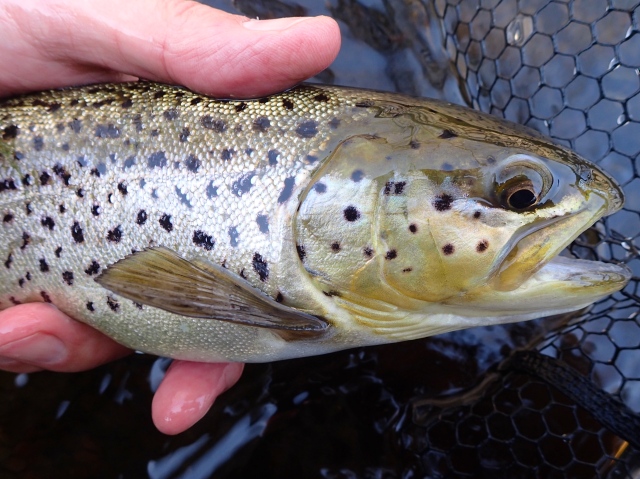 Good Friday is my traditional striper outing in honor of the greatest fisherman ever, Simon Peter. The Bass-O-Matic was humming along at full tilt — fishing partner Bob Griswold and I caught dozens and dozens of stripers. If you’re a glass is half full kind of person, the good news was that these 14″ fish represent a strong local showing of the class of 2015. There were a few low 2o-inchers in the mix to keep things interesting. The bite shut down at dusk, and we called it a good striper thumb day.

Representing the Class of 2015, Mr. I-Can’t-Keep-Away-From-Your-Fly. Very aggressive feeders, and legions of them. Where’s my five weight?