This article, written by yours truly, first appeared in the July 2014 issue of Mid Atlantic Fly Fishing Guide. Many thanks to MAFFG for allowing me to share it on currentseams.

Wet fly anglers know something you don’t: three flies are better than one. Presenting a team of wets is an ancient, traditional practice. It is also a highly effective way to fish. Many people shudder at the thought of casting multiple flies. They picture wind-blown leaders twisted into snarls only Alexander the Great could solve. There will undoubtedly be times when you’ll have to do a little tangle triage. But the benefits of fishing three wet flies far outweigh the downside.

Droppers are the quickest way to find out what the trout want.

Let’s say you get to the river and find swarms of caddis. The water around you is simmering with feeding trout. Yet they will have nothing to do with your caddis offerings. I faced this situation a few years ago on the Farmington River. Turns out the trout were keyed on small mahogany duns. I had a caddis pattern as my top dropper, a size 18 February Red in the middle, and a Pheasant Tail on point. I took trout after trout on the February Red – a perfect match for the mahogany duns. If I didn’t have that fly on, I might still be cursing the day, instead of fondly recalling its multiple hookups.

And that’s the beauty of the three fly team. You’re giving the trout a choice. Different flies, colors, sizes, and even life stages. If you’re not sure what’s hatching, you can pick out three different species that might be on the water. Perhaps size – or lack thereof – will be the trigger: a big, fat, juicy drowned hopper on point, an ant in the middle, and a tiny midge or BWO on top. The trout will always tell you what they like. Some days, they’ll have specific preferences. Others, they will be equal opportunity feeders. With a team of wets, you’ll be ready for either situation.

A Farmington River brown that picked out this Pale Watery wingless wet from a team of three during a hatch of creamy mayflies.

Which flies, and where?

There are no hard rules about fly placement. While I occasionally mix things up, this is how I usually order my flies.

Top dropper – Almost always an emerger pattern, for the simple reason that this fly will be closest to the surface. Soft-hackles excel in this position. A good rule of thumb is to make the top dropper the size and color of what’s hatching.

Middle dropper – Make it a high-confidence fly, like a pheasant tail, or a fly that offers a contrast in size and color to the other patterns you’re fishing. Or, if you’re unsure of what’s in the water, try something you suspect might be hatching.

Point fly – This is where I typically place the largest or heaviest fly, such as a bead head pattern or an underweighted fuzzy nymph. The point fly will always be the deepest fly on the team. Occasionally, I’ll tie on an attractor fly like a Peter Ross. I find a three-fly team easier to cast if the largest, heaviest fly is on point.

How and where to fish a team of wets.

One of the things I love about wet fly fishing is that I can walk hundreds of yards of river, cast down and across, throw a few upstream mends, and let the current do the rest of the work. It’s called the mended swing, and it is a beautiful, relaxing way to cover water – and catch fish. The mends slow down the speed of the swing, forcing the flies to travel at a more natural pace. At the end of the swing, let the flies hold in the current below you, especially if they are hovering over likely holding water. This is called the dangle, and during it you’ll experience some of trout fishing’s most powerful takes. Resist the temptation to make a sudden reaction hook set. All you’ll do is pull the fly out of the trout’s mouth. When you feel the tug, ask yourself, “Are you still there?” In the time it takes you to do that, the trout will have turned away with the fly, neatly hooking himself in the corner of the mouth.

On any given river, the best wet fly water is often overlooked and under-fished. I call it the snotty water – swift riffles, runs with a mottled surface, boulder-strewn pocket water. Look for current that is moving at a good walking pace. Target seams, eddies, shadow lines, transition water between depth and shallows, and especially what I call “the cafeteria line” – the main drag clearly marked by a line of foam. Be sure to present your flies on both sides of it.

Mottled surfaced and boulder-strewn runs are an ideal place to swing a team of wets.

Even the most experienced casters suffer the occasional wet fly dropper disaster. To minimize tangles, keep false casting to a minimum. Pile casts are a sure recipe for trouble – you want your team of wets to lie out neatly in a line. Check your team often; once a compromised rig runs downstream, the tangle gets exponentially worse. On windy days, try to cast during lulls between gusts.

Rather than being attached to each other by the hook bend, each fly swims freely on its own tag, further enticing trout – and making it easier for them to take the fly. I like to start with a six-foot section of tapered leader, then add three sections of Maxima four- or six-pound for the droppers. Maxima has a large relative diameter, which helps the flies stand out from the leader.

If it looks complicated, think of it as simply tying three triple surgeon’s knots, two of them with extended tags. Of all the leader materials I’ve tried, Maxima is by far the best for dropper tags. I use both Ultragreen and Chameleon. 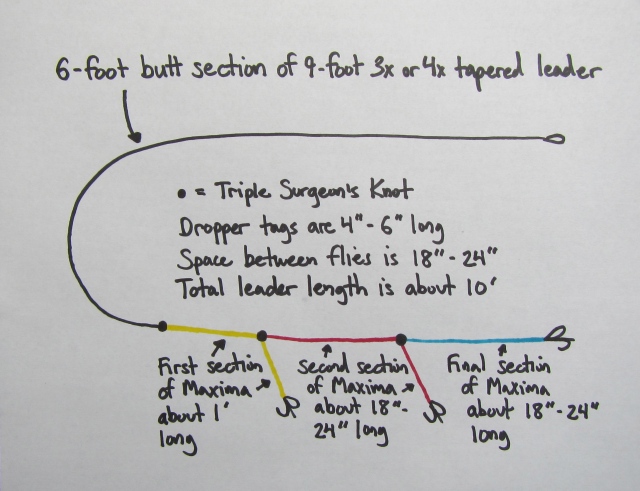