Stonefly Press continues their “Best” (Tailwaters to Fish, etc.) series with this new offering from Terry and Wendy Gunn. Best, of course, is always relative, but you need to make a stand somewhere, right? The authors do a fine job of choosing 25 national parks to fly fish, from the warm salt of the Florida Keys to the bracing salmon runs of Alaska, and from down east Maine to California dreamin’.

Since the authors can’t possibly have an intimate working knowledge of all these wondrous places, they don’t pretend to. Instead, they rely on the first-hand experience of local guides and outfitters. It’s a good strategy, and it lends an agreeable credibility to each chapter.

You will like this book if you are planning on making a pilgrimage to fly fish a national park — or you like to dream about doing so, and maybe this will be the impetus you need to set the wheels in motion. For example, my wife and I have been talking about making a family trip to Grand Canyon. Well, lookee here. Chapter 12, Grand Canyon National Park.

I get an overview map with trail access; general information on the location; specifics about the Colorado River and its tributaries; notes on fisheries management; notable nearby water; and a general list of tackle, gear, and flies to bring. Each chapter includes a detailed short-list sidebar with essentials like logistics information, local fly shops, guides/outfitters, places to stay, where to eat, and even if you’ll find bars on your cell phone. Of course, there are the obligatory scenic view photos and local specimen fish porn. Each chapter is unique in its informational offerings. For example, you might also find details on hatches; resident animal life; and seasonal conditions.

Maybe I’ll start up in Maine with those Acadia salters. Ay-uh.

Have Santa put 25 Best National Parks To Fly Fish on your list. 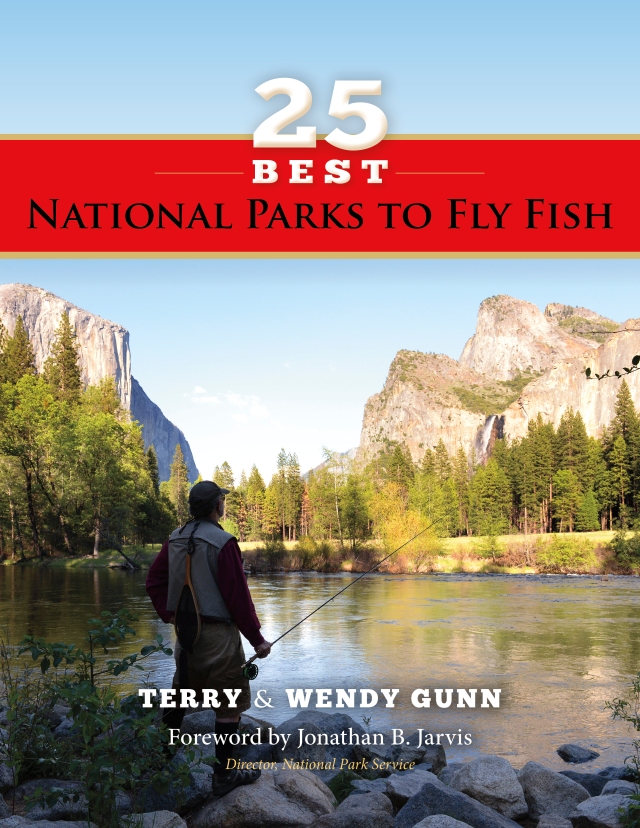 So one day in October I got an email from Robert D. Clouse, Publisher at Stonefly Press. He wanted to know if I would review Terry and Wendy Gunn’s new book, 50 Best Tailwaters to Fly Fish, what with currentseams being a website Stonefly follows and enjoys. Well, heck, Robb, flattery will get you everywhere. Besides, it’s good for writers to make nice with editors and publishers.

After I thought about it, I said sure. On one condition: it would have to be a totally honest review. Happily, we can all breathe easy now, because I really liked this book. 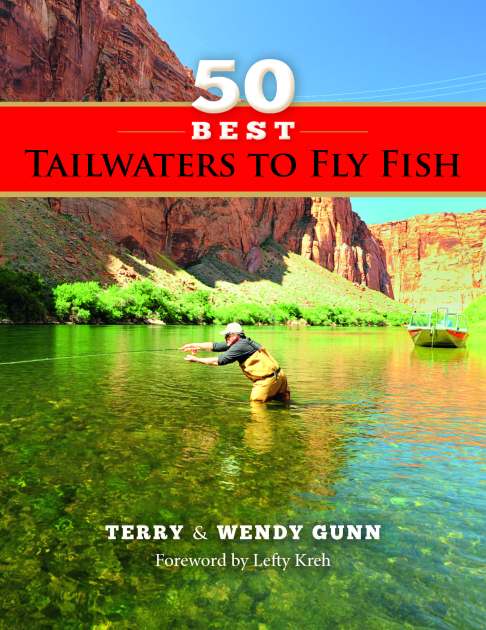 Despite its name, there are 56 tailwaters within its covers. Bonus rivers, if you like. Cool! In case you didn’t know, tailwaters are rivers that flow out of dams. The dam regulates the flow, and the benefit is a consistent year-round supply of trout-friendly water. The authors divvied up the country into four geographic regions: West, Rockies, South, and East. Very logical. Most rivers get four pages of attention, starting with an easy-to-read full-page map of the river with turnouts and access points. There’s a basic overview of the fishery, followed by hatches, regulations, and tackle. Each chapter concludes with a handy listing of where-tos, like fly shops, outfitters/guides, campgrounds, hotels, and superlatives like “Best place to get a cold, stiff drink.”

How could the authors possibly know enough about all these rivers to write intelligently about them? Well, they couldn’t. So they’ve wisely called upon local guides and outfitters to present a topline view of their home waters. (I’m still getting over the sting of not being asked to write the Farmington River section, but since my good friend Grady Allen, owner of UpCountry Sportfishing, did the honors, it eases the pain a bit. Although – ouch – I also didn’t get a mention as a local guide. All good-natured kidding aside, Robb, perhaps in the second edition?) Naturally, with so many authors, the writing is a bit of a mixed bag. But this isn’t high literature. It’s how-to/where-to reference. Most everyone brings something to the party with their writing, and there are plenty of insightful tidbits sprinkled throughout:

“A good rule of thumb: If it looks like you are going to die climbing down to the river, that is likely a good spot to fish!” (Deschutes River)

“If you give the river permission to intimidate you, it will.” (Upper Delaware River)

“Here are two helpful hints: Pick one section of the river and get to know it. Bring a reasonable expectation.” (Madison River)

There are the requisite ooh-ahh streamscape photos, enchanting those of us who’ve never been to River X. Among the many shots that captivated me is one of the Madison wending through a golden valley. Threatening clouds loom overhead, and mountains majesty stand watch from a safe distance. I am so there in my head right now. Truth be told, I’m a homebody, and I don’t do a lot of traveling to fish. But some of these chapters have gotten the ramblin’ fishing dudes in my brain working overtime. Western road trip, anyone?

A few quibbles. Too many chapters are dependent on fish porn for visual support. I get it, everyone wants to catch a big trout. But several pages into the book, I’m already overloaded by grin-and-grab lunker imagery. What’s more, each chapter ends with a quarter page devoted to the guide who wrote it, often accompanied by a photo of them brandishing a big fish. Too much for this reader. While I recognize that perhaps this was the price of admission for the contribution, might that real estate have been used to give us a few more words on the fishery?

In the end, though, 50 Best Tailwaters To Fly Fish proves to be a tremendous resource for the traveling angler. (Or the dreaming-of-traveling-angler, for those of us with kids.) Its greatest strength is that it gives you enough information about a river to whet your appetite – then leaves you wanting more. Or at least, wanting to make a pilgrimage there.