Big Jim loved his Pale Watery nymphs. We know this because he’s got two of them listed in his book. This is the first Pale Watery nymph, and it’s a simple, buggy tie. I’m picturing it as the point fly on a team of three; dropped off the bend of a Usual or Light Cahill dry; or below a dry with the dry on a tag. Speaking of Pale Watery, keen students of Leisenring’s fly patterns will remember the Pale Watery Dun Wingless — one of his “favorite twelve” — from last year’s series here on currentseams.

Hook: 15, 16
Silk: Primrose yellow
Hackle: One or not more than two turns of a darkish-blue cockerel hackle only long enough to suggest wing cases.
Tail: None.
Rib: Fine gold wire halfway up the body.
Body: Cream colored fur (Chinese mole or Australian opossum) dubbed very thinly at the tail and heavily at the shoulder and thorax.
~
Tying notes: No gots cockerel, so I used a dark dun hen cape. For body fur, I chose Hareline Dubbin Light Cahill (HD1). It is here that find myself faced with a disturbing question. Leisenring specifies that the rib should go “halfway up the body.” Does this mean his other nymphs were meant to have a rib that continued over the thorax? It’s quite possible. I’m not a fan of ribbing over a heavily dubbed thorax — it kind of defeats the purpose of that buggy section — but Leisenring may have intended otherwise.

Finally, Leisenring dispenses with those noseeum tails! (Not to worry. They’ll be back.)

I rather like the Half Stone Nymph. I know a small stream that gets a decent late spring hatch of yellow sallies. This pattern, dropped off the back of a bushy dry, will drive the char absolutely out of their minds. On the smaller side at 13-14, I can also see it supersized to an 8 or 10. Its grey and yellow palette reminds me of Ken Abrames’ R.L.S. Easterly (and the soft hackle I tie by the same name). Mole fur is underused in the modern fly, so it’s good to get reacquainted. Bonus: Mole skins are cheap and fairly easy to find. Look for one at Badger Creek.

Hook: 13, 14 (I’m using a 2x heavy, 1x long 14)
Silk: Primrose yellow
Hackle: Very short blue dun hen’s hackle, 2 turns or 3 turns at the most.
Tail: None.
Rib: Very fine gold or silver wire.
Body: Primrose yellow buttonhole twist.
Thorax: Mole’s fur dubbed fairly heavily.
~
Tying notes: Much easier of a tie without those infernal very small tails! As always, DMC embroidery floss #744 is my primrose yellow buttonhole twist substitute, one separated strand’s worth. I attach it just below the thorax, then wrap back up over the first layer. I think a dubbing loop makes for a buggier thorax.

James Leisenring’s nymph template takes some getting used to. At least it does for me. I get the short hackle (even though I do quite well, thank you, with nymphs using long hackle). But I’m still mystified by these “very short” tails. I’m skeptical that a trout will notice an almost-not-even-there tail in a gurgling 3-knot current. Not to mention they’re a pain to tie. But never mind. Who am I to argue with greatness? 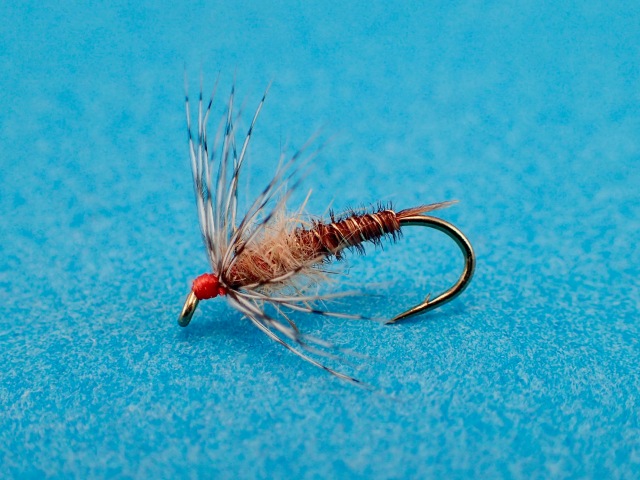 Hook: 13 (I’m using a 2x heavy, 1x long 12 or 14)
Silk: Orange (I’m slumming with UNI 6/0 thread)
Hackle: A short-fibered, light brown feather from the Hungarian partridge.
Tail: Three fibers from a cock pheasant tail feather tied very short.
Rib: Gold or silver wire.
Body: Three reddish fibers from a center feather of a cock pheasant tail. (As with peacock’s herl, tie in, twist with thread, and wind up body, twisting together as you go.)
Thorax: Hare’s ear fur dubbed fairly heavily.
~
Tying notes: Short-fibered light brown partridge hackles are hard to come by. Be prepared to do some hunting on your skin. Normally, I’d use the same pheasant tail fibers for the tail as I would for the body. But these tails are so short, I kept pulling them out when I tried to use the whole smash. So, separate sets of three for tail and body. I find Leisenring’s directive of twisting the fibers around the thread unnecessary for reinforcement purposes — the gold wire does that nicely. If he’s trying to get some extra orange in the abdomen, well, then, Jim, I’ve failed you. I think a dubbing loop makes for a buggier thorax. Two wraps of hackle are all you’ll need — or manage.