I used to work at an advertising agency where the owner would go from floor to floor and ask each of us, “Is this the best job you’ve ever had?” At the time, for me, it was. But as it turns out, now I’ve got the best job I’ve ever had. I work for myself. There are multiple tradeoffs with any entrepreneurial venture, particularly in writing for a living. For example, I don’t get any paid vacations. But I do get to set my own schedule. And no. I’m not trading with you.

Because last Friday, I decided I needed some photos of small stream wild trout for an upcoming article. So while most of the rest of the world was working for someone else, I was heading out into to the woods on one of the Ten Best Days of the Year. You know the kind. Bluebird skies. Sun that coats your body with gratifying warmth. Cool, crisp air you can almost taste as you suck it into your lungs.

When this tree fell, it changed the whole structure of the pool. I don’t often use it for a bridge, but ants and squirrels do. 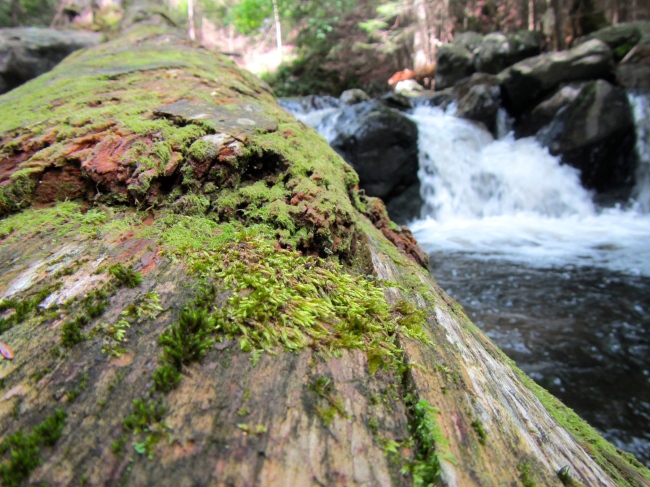 The brook was at an ideal height, 60 degrees, and running clear. While there wasn’t much in the way of hatch activity (impossibly small creamy midges and some size 16 tan caddis), the water was teeming with aggressive brook trout. I started working my way upstream on the surface with a size 16 Improved Sofa Pillow. (At first glance, you’d think the fly was a Stimulator, but among its differences are a tail made of soft fox squirrel. I like that material, as it makes it easier to get a hook set with smaller fish.) I pricked dozens of brookies, mostly in the four-to-six inch range. Some of them I could see as dark forms materializing from the mosaic of the streambed, lunging at the fly as it skittered along the surface before resigning themselves to defeat, or stubbornly refusing to relinquish pursuit until the prize was theirs. Others launched themselves clear of the water, cartwheeling across the surface once hooked. All of it made for magnificent sport, and if there’s such a thing as rapture while fly fishing, I do believe I have reached that state many times now on waters like this.

Clearly, Mother Nature needs to have her name added to the list of great impressionists. 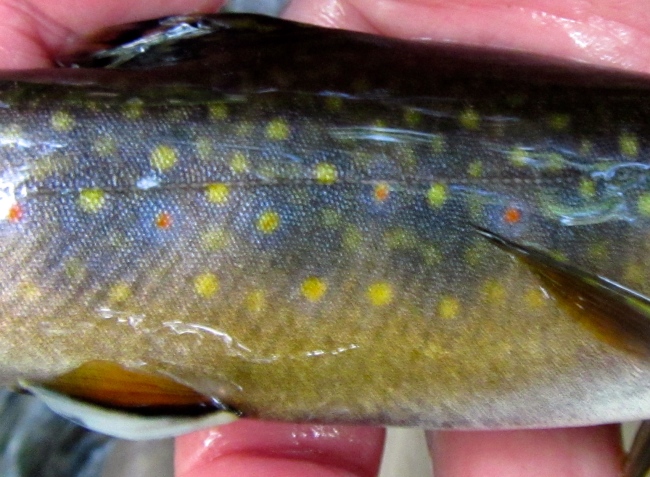 Once I reached the top section of the brook, I switched to subsurface. I discovered a long time ago that wild brookies are of a curious mien; when you introduce an artificial fly into their world, they rush to examine it, and more often than not, try to eat it. Deeper holes that drew no rises to the dry were packed with trout that weren’t the slightest bit bashful about telling me they preferred their dinner wet. I was using some underweighted flies: a black and grizzly beadhead micro-bugger, and a beadhead version of the classic Gray Hackle Peacock wet. Both served me well in the more substantial plunge pools, where I could swing, jig, and strip them across the depths.

The Kate McLaren makes its small stream debut. Stonefly? Salamander? Sculpin? Clearly something that looks alive and good to eat. 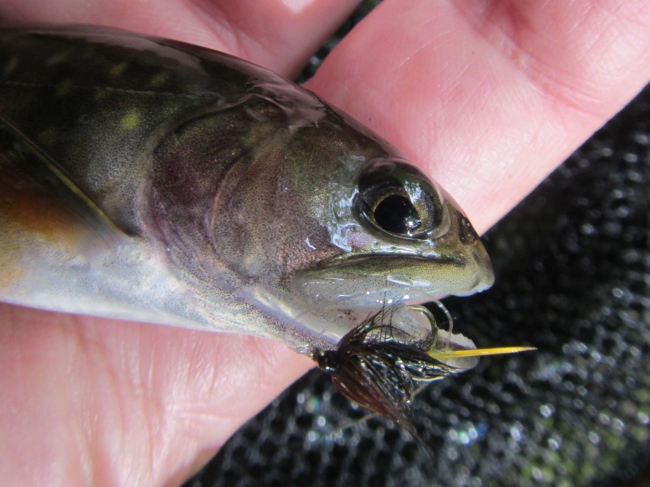 Then it occurred to me. I’ve never fished that size 14 Kate McLaren I tied up last winter. It seemed like the perfect fly for dapping along the broken surface. On it went. Nothing at first, and I began to regret my decision. Surely there would be some takers. Yes? You betcha. There, in that shallower run. On the other side of that seam. Between those two boulders. Just past that undercut bank with the sapling ready to keel over during the next freshet. I was having so much fun, I almost forgot the reason I came out today.

Having a job like this makes me wonder whether, in fact, life actually is fair. I don’t know the answer. But I do spend a lot of time laughing while I’m working.

A picture perfect day. A small stream filled with hungry brook trout. And an El Rey Del Mundo Flor de Llaneza. Surely I must be the king of the world. 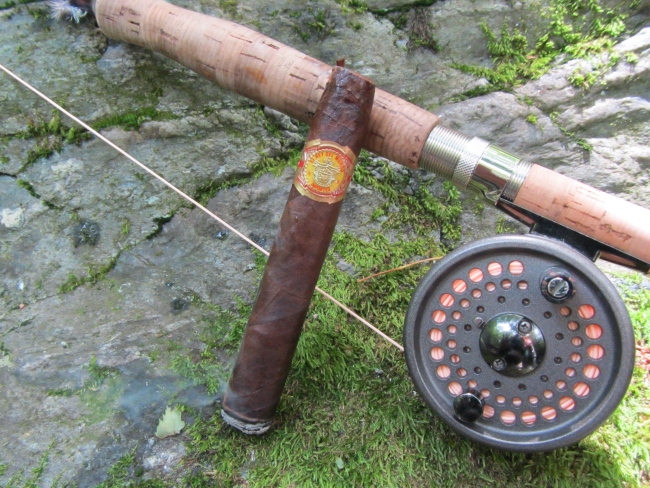 Every year, I’m on the lookout for new flies to tie and fish. My friend Jon, who’s been wet fly-fishing forever, also happens to be from the UK. So he’s been exposed to a broad cross-cultural mix of patterns. When I asked him for some suggestions, he immediately offered up the Kate McLaren. It’s fair to say that I liked Kate the moment I laid eyes on her.

The Kate McLaren is a Scottish loch fly, intended to be the top dropper (or bob fly) on a team of three. While its traditional use is on still water, I’m going to be fishing this on rivers. And while I might give it some time as a top dropper, it’s going to get the lion’s share of action on point.

There’s something about the contrast of the golden pheasant crest tail and the dark body that I find magnetically appealing. Golden pheasant crest almost glows when wet. Who knows what a fish will think this fly is – perhaps a flash of spotted salamander, or a chubby stonefly – but I can’t wait to feel that first take. 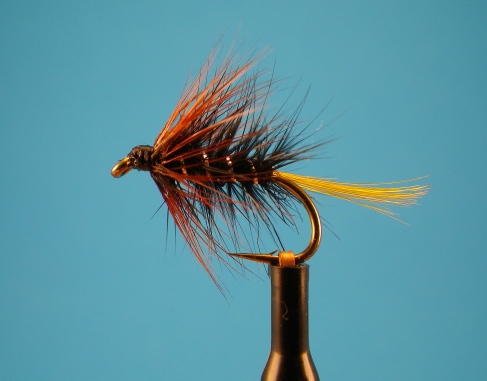 Tying notes: Technically, this is a Kate McLaren variant since I used soft hen instead of stiffer rooster hackle. Since I primarily intend to fish this fly subsurface, I wanted the action the soft hackle would provide. When finishing the body, I tied the black hackle in near the head, leaving the thread at the tie-in point, and then wound the hackle backwards toward the tail. I then secured the hackle with the tinsel, and wrapped it forward to the thread. Also note that the black hackle is smaller than the brown. Some of the Kates I’ve seen have a longer tail, but I like the proportions of this one. I got lazy on the head and left it rough. As Dave Hughes said, trout aren’t interested in neatness.