I’d been to Scotland before. My Nana and Grandpa, two off-the-boat Scots, took me when I was ten years old. Now, nearly fifty years later, I was going back with my wife and kids.

Chanelling my inner Scotsman. Nae kilt for me, but surely there’s an auld angler within each of us who fishes traditional wet flies. 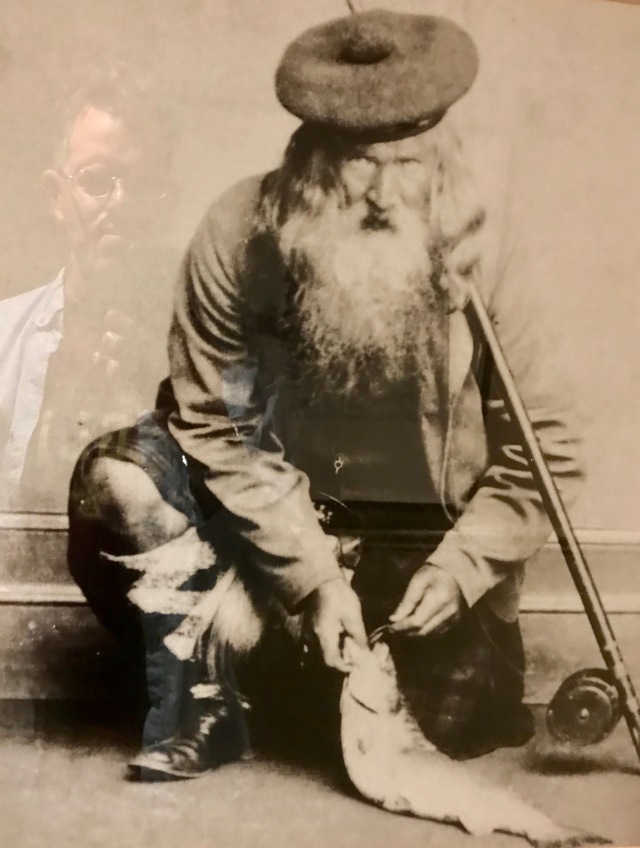 Although this was a family trip, it seemed a moral imperative to not only fish, but to fly fish in the homeland of my forefathers. And if I could catch a trout on an ancient or traditional Scottish wet fly pattern, that would immeasurably sweeten the pot. So, where and how to do this? I ruled out Salmon fishing: cost-prohibitive and a greater chance of failure than success (maybe next time). So trout it was. Buddy Matt Supinski hooked me up with Graeme Ferguson, and we made plans this past spring for August 9.

Well, that’s the thing about booking so far in advance in a land thousands of miles away: you play the weather and conditions lottery. And my goodness, did we lose. Cam and I have a knack for choosing disaster weather on fishing trips, and we nailed this one dead center. The forecast called for heavy rain and 10-20mph winds. The Scots call it dreich. That sounds about right.

Brown, swollen rivers meant loch fishing — or in this case, lake fishing. Our mark was Lake Menteith, the only lake in country of lochs. Now, stillwater fishing is not my bag, but I was willing to try. And so we launched in a driving rainstorm accompanied by banshee winds. What the hell — the fish don’t know it’s wet.

We started off with sink tip lines and teams of three flies. I had the first touch, but I didn’t really know what to look for in a take. A botched hook set proved to be my downfall. A while later, Cam was on. If it looks wet and wicked and wild, it was. But a bent rod tends to make you oblivious to the conditions.

Attaboy, Cam! Trip bought and paid for. These landlocked rainbows reminded me of junior steelhead in temperment and leaping capability. They’re also not shy about going deep — we had several fish sound on us as if the lake were bottomless. This fish took Cam’s point fly, a very Nuke Egg-like day-glo pattern.

Are we having fun yet? We’d launched around 9:30, and three hours later the rain was dissipating. Graeme suggested we break for lunch, so we headed back to the clubhouse to dry out and re-fortify. A most civilized menu: Carrot/leek/corriander soup (a triumph, Mrs. Ferguson!), meat pie, and scotch eggs (hard boiled, surrounded by sausage, bread crumb coating, decadent).

Two critical events turned the afternoon tide in our favor: conditions improved (the rain stopped, it warmed up, hatches began, and the trout showed on the surface to feed) and I managed to fire up — in the wind, no small task with matches — a beloved Partagas Serie D No. 4. Floating lines on, first stop, bang! I’m on. You can see from the glassy water just below my elbow that we’re fishing in the shallow water of a cove, sheltered from the blow. We’d drift where the wind took us, adjusting as needed. Graeme also brought a subsurface drogue chute — brilliant! — that when deployed slowed our drift.

I bagged another one not ten minutes after the above photo was taken. We moved to a mark where a wee burn was dumping colder water into the lake. I decided to clip off one of Graeme’s buzzers (UK for midge larva) and tie on a fly I’d tied and brought with me, the traditional loch bob fly Kate McLaren. One of the beauties of fishing a team of three is that you often don’t know which fly the fish chose until you land it. Fish on, battle fought and won, and as Graeme netted it, he announced, “You’ll never guess which fly she took. The Kate McLaren.” I loved that fly, that moment, and especially that fish so much I decided to give her a kiss. The trout may look traumatized, but she swam away no worse for the wear.

Final tally was four for dad, two for Cam, and one very happy father-son team. Our boat, #4 (coincidence?) was a fine vessel. I can’t say enough good things about our guide, Graeme Ferguson: professional, matey, courteous, knowledgeable, capable, and his wife makes incredibly delicious soup. Here’s his contact information: graemeferguson_82@hotmail.com. He does rivers and salmon, too. Highly recommended. Tell him Steve sent ‘ya.