Hot on the heels of yesterday’s scathing menhaden management commentary comes a shout out to the Connecticut members of the ASMFC. This is from a post made by Charles Witek on Facebook: “The New England states are worried about lobster bait. Virginia is worried about Omega. Everyone is worried about cutting fishermen’s income. It’s probably no coincidence that–with the exception of Connecticut and Rhode Island–the states seeking a larger cut in menhaden landings were southern–North Carolina, Georgia and Florida–which have neither a lobster fishery nor a big menhaden fishery. Connecticut made a noteworthy effort to convince the Management Board to do the right thing, and Rhode Island has long been a leader for better menhaden management. Folks in those states–particularly in Connecticut–ought to thank their fisheries managers if they get the chance.” Huzzah! If you want to send them a thank you email, you can find their contact info here. Please comment here if you send an email!

On to striper fishing. I’ve spent a significant amount of time this fall learning a new mark. The going’s been slow, but on Tuesday night I finally had some action — about a dozen hits, and the water was so calm I could also see several follow-the-fly wakes. Nothing big, but the big fish potential remains. Then there was last night. Specifically, the fog. It came in on big galumphing herds of elephant feet. We’re talking horror-movie density fog. I hate fishing in fog. With a few notable exceptions, it’s always been a bite killer. And so it was last night. Still, I got to stand in the ocean and fish and smoke a cigar and you know, that ain’t all so bad…

If there is a defining line between heavy fog and actually rainfall, I think we reached that threshold.

The dumpster fire that is the ASMFC continues to burn brightly. If you want evidence that their conservation model appears to be based on the theme, “Kill more fish,” look no further than this week’s meeting of the ASMFC’s Menhaden Board.

I’ll let the ASGA pick up narrative. “Disappointing news coming out of this morning’s meeting of the ASMFC Menhaden Board, which had a great opportunity to show the public its commitment to recognizing menhaden’s critical role as a forage species. Despite the Board’s August decision to adopt Ecological Reference Points (ERPs), today it adopted 2021 and 2022 catch limits that have greater than a 50% chance of exceeding the fishing mortality target, undermining the intent of ERPs and disregarding public comments urging a precautionary approach to menhaden management. ‘Decision: Move to set a TAC of 194,400 metric tons for 2021 and 2022. 13-5-0-0 Roll Call.’ More details to follow in our full debrief of the ASMFC meeting.”

Stupid is as stupid does, and when it comes to conservation and fisheries management, nobody does stupid better than the ASMFC.

This is from the American Saltwater Guides Association:

“Striped bass young of the year just came out from MD Department of Natural Resources. The 2020 results are pretty much awful. The YOY index for 2020 was a dismal 2.5 with a running mean of 11.5. The 2015 year class is the last dominant class on record. With the ASMFC meeting coming up next week, now is the time to get involved. Striped bass need you now more than ever.”

You can find the Chesapeake YOY survey results here.

The ASGA continues to be a positive influencer for striped bass conservation. If you’d like to get involved, or make a donation, visit their website.

Out favorite dysfunctional — or is that non-functional? — committee met this week to begin formulating its future plans for striped bass. In another insightful essay, Charles Witek asks the question, “How Do you Define Success?” Suffice to say, the ASMFC grades itself on an absurdly low curve.

So where’s that Gurgling Sand Eel pattern you asked for? On its way. No, really. I’m hoping by the weekend.

Last but not least, it’s been a tough summer due to drought and heat, but I fish in cycles, and right now I’ve got smallmouth on the brain. Big time. Nonetheless, to the Farmington I go. Guiding today.

Warm, low water doesn’t bother him. He liked the look of a TeQueely.

If you fish for and love striped bass, Charles Witek is a national treasure. He stays on top of nearly every important meeting, issue, and decision regarding striped bass stock management, and reports back to us. Here’s a terrific essay from his blog, One Angler’s Voyage, “ASA Striped Bass Webinar Omits Key Rebuilding Issue.”

I can’t remember the last time I took a legal fish. Might have been Block last summer.

In case you missed it (I know I did), here are a couple good, quick reads on last week’s ASMFC striper meeting. First up is Captain John McMurray’s take. Next, Charles Witek warns of history repeating itself in this trenchant blog post.

I hope you’re all safe and well. These two fine pieces will keep you entertained as well as informed.

I’m going to be tying some of these (Crazy Menhaden flatwing/bucktail hybrid) soon. 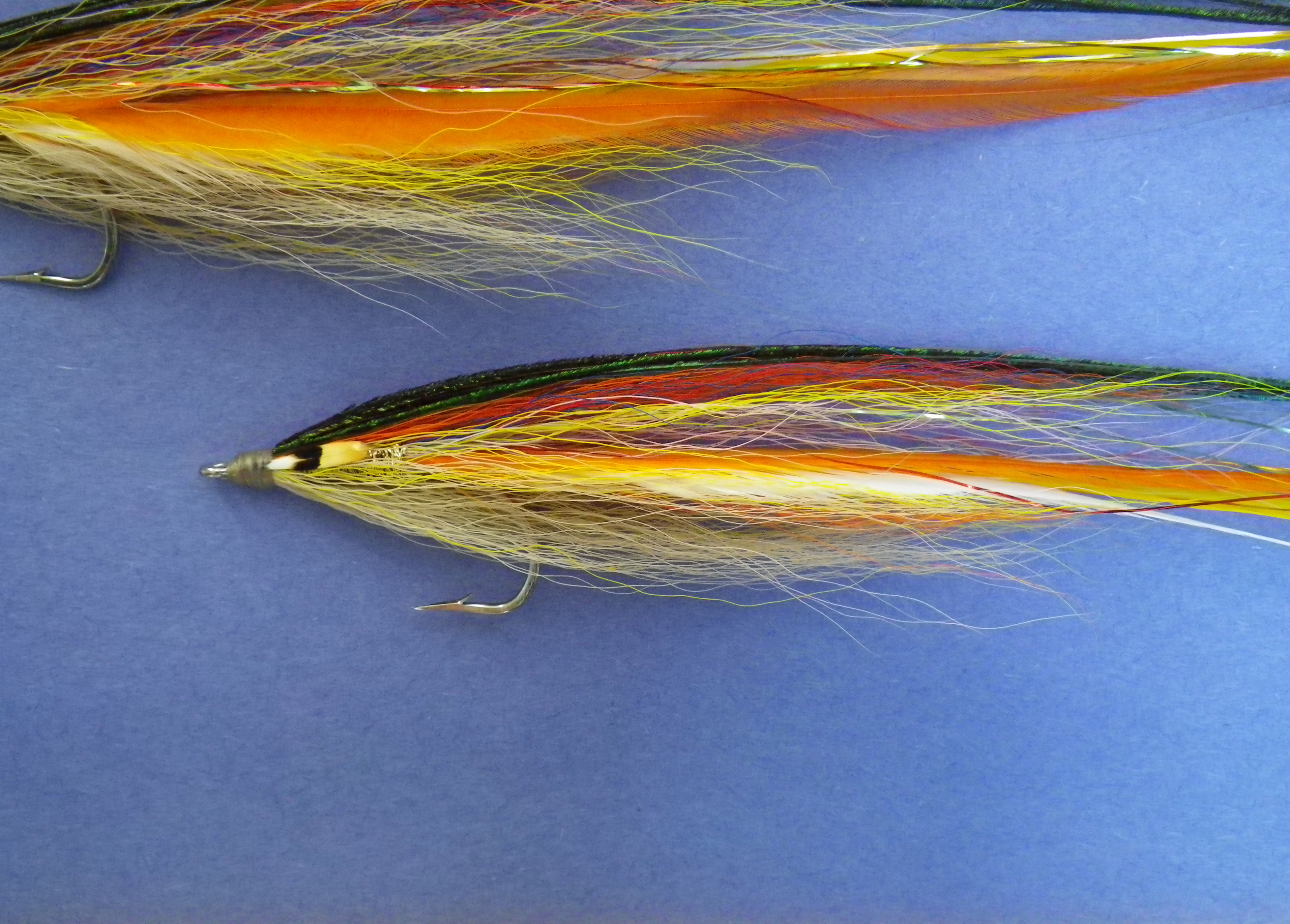 Good words from the ASGA: “We don’t want to be tone-deaf on the major issue at hand. However, life must go on and we still have to keep everyone informed on fisheries management issues.”

It wasn’t as bad as I’d feared. It wasn’t as good as I’d hoped. Welcome to the wonderful world of the Atlantic States Marine Fisheries Commission winter meetings. Yesterday’s focus was on discussing and formalizing each state’s Conservation Equivalency proposals. Almost 24 hours later, here are three big takeaways.

Settle in for a cup of tea. This might take a while.

The ASMFC is structurally and procedurally bloated. An efficient organization this is not. The webinar was audio only, so it made a helter-skelter meeting like this one even more challenging to follow. At times it was like watching a Bergman film — you try your best to keep up but you’re never really sure what’s going on. And I’m not the only one who saw it that way — the chairman of the meeting described it, and I’ll quote, as “chaotic.” Maybe it’s just as well that the meeting wasn’t video broadcast — surely you could lump the ASMFC Winter 2020 CE decisions along with laws and sausages as things you should never see being made.

My reaction to some states’ CE proposals can best be summed up by Otto, who so eloquently stated: “Disappointed!!!” (That includes you, Rhode Island.)

Beware of rogue states within the ASMFC. North Korea, Iran, Syria, Sudan, and…New Jersey? Let’s not forget Maryland, who along with New Jersey have some rather — ahem — creative ideas on how to best conserve and restore our rapidly dwindling stocks of striped bass. Remember in “A Fish Called Wanda,” when Wanda reminds Otto that the central message of Buddhism is not “Every man for himself?” Someone should point out to Maryland and New Jersey that the ASMFC mission is not, “Kill as many striped bass as you can under the cloak of conservation.” Nope, those emperors don’t have new clothes. They’re wearing the same crappy, poorly camouflaged outfits they’ve been sporting for years. Kudos to those who saw through their charades, like…

Some ASMFC Commissioners get it. If a state’s CE proposal fails to achieve target results, that state should be held accountable, right? High fives to those commissioners who called out certain CE proposals, effectively telling those states to behave and eat its broccoli. Apologies in advance to those I missed, but here are a few of the people who fought the good fight yesterday: Justin Davis (CT). Capt. John McMurray (NY). Ritchie White (NH). Pat Keliher (ME). Again, these are only a few of the people I could positively identify. A very sincere thank you to all of you who are trying to save our stripers. If you’re reading this, why not take a few minutes to send them an email of thanks and support. You can find that list here.

Is anybody there? Does anybody care? Some commissioners clearly do. Especially those who understand that killing this fish now doesn’t bode well for the future.

Have you ever wondered why so many species managed by the ASMFC (Atlantic States Marine Fisheries Commission) are in trouble? How can any commission tasked with managing fishing stocks have such an abysmal track record and still exist?

Why does the ASMFC suck at managing our striper fishery? Because they can. Compare their non-checks and balances with the Magnuson Stevens framework. Share this infographic with fellow anglers and conservationists. And be sure to read this synopsis of ASMFC vs Magnuson Stevens.

If it all sounds pretty dire, it is. But there is hope: the American Saltwater Guides Association (ASGA).

Don’t let the name fool you: the ASGA has your (the recreational, conservation-minded striper angler) best interests in mind (as well as in deed). They’ll be going to bat for us at the ASMFC meeting next month. To quote the ASGA: “We are hereby putting the ASMFC on notice. If they choose not to follow their own rules yet again we will do everything in our power to legislate a new framework that won’t allow them to mismanage the resource.”

What can you do to help?  Here’s a short action list:

1) Educate yourself – ASGA blog is a great resource

2) Write your state ASMFC reps (you can find the list here.)

3) Find a post or infographic on ASGA that speaks to you and share it.
4) Hit the contribute button and make a donation support the efforts of ASGA (The value of this cannot be underestimated. It costs money do do all that research and travel around the country to represent your interests.)
~

The entire recreational angling community has to mobilize if we are going to have any chance of recovering this precious resource. I’m asking all currentseams readers to step up and do at least two of the above. The stripers and I thank you.