Those of us who grew up with off-the-boat Scots grandparents know the song “Wee Deoch an Doris” well. For the uninitiated, as you have not heard it, I shall proceed to translate and offer context. The song is about having one more drink before you head home. “If you can say it’s a braw bricht moonlicht nicht” (if you can say it’s a good bright moonlit night), then you’re a’ richt, ye ken (not nearly as intoxicated as you may think). So, have another.

That also made me think of Chip Diller getting his paddling in the Omega initiation scene from Animal House.  I might as well have been saying “Thank you sir, may I have another,” to the moon this past week, because when it was out and braw and bricht I took a right spanking.

To misquote Starbuck, moonlight feels wrong. I lost the moon lottery big time — quarter going into full is by far my least favorite time to fish for stripers at night. 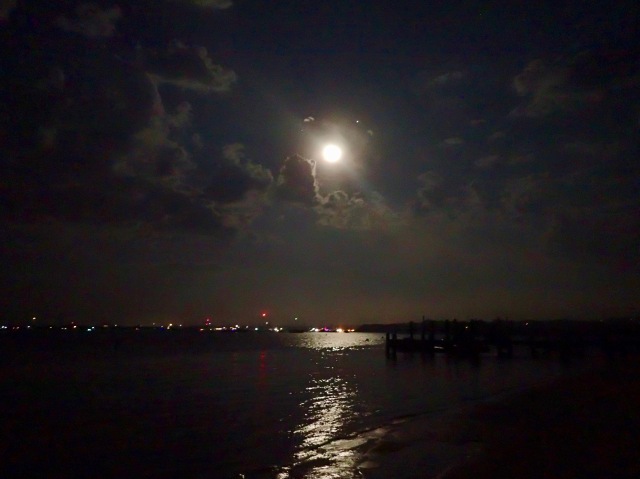 I won’t bore you with the minutia, but here’s the story in numbers: Seven nights. Three skunks, including two in a row. The last time I took such a beating was 2012 or 2013. For context, I had one skunk in my last 15 Block outings over the past two years. I ran into an angler — I’ll call him “J” — whose response to me telling him that I hated fishing under the full moon was, and I quote, “you’re crazy.” Now, I appreciate J’s enthusiasm and confidence. And I desperately wanted to be proven wrong. But the fact is, whether flat or surf or dredging deep bottom, I scored a big, fat zero — not even a courtesy tap — on every night the moon was out.

To continue the kvetching, size — or lack of it — continued to be an issue. Used to be that I could count on Block to produce a high percentage of legal fish. Heck, in 2018, a third of the bass I landed were over 28″. This year, not a one. OK, so there were no micros in the mix, and a 24″ Block bass battles like a 30″er from the Hous…but the continued lack of bigger striped bass from the shore is disturbing, although not surprising.

Was it all misery? Heck, no! I had four fun-filled nights, three with double-digit numbers. I played around with my fishing schedule and was able to beat the moonlight — even this old dog can adjust. One night the weather gods appointed a magnificent cloud bank to shroud the Island. The stripers said yes. And I got in some seriously wonderful trout fishing for stripers.

I’ll tell you more about it soon.