Mothers can’t help but worry, and so it was with mine when I told her I was going steelheading during the first real cold snap of the season. Turns out she was only partially right.

Nothing kills the steelhead bite with more indifferent cruelty than a cold front. The fishing had been pretty good the few days and hours before we arrived — lots of steelhead, particularly in the upper end of the river, and fair enough weather and flows. By the time we waded in, things were already going south. (The irony will not be lost on those who recognize the cold front as a wanderer originating from the north.)

This was my first non-solo steelhead trip (other than with my sons) in years, as I had the company of the illustrious Peter Jenkins, owner of the Saltwater Edge in Newport, RI. If Jenks looks cold, he probably is. I know I was. The thing about a boat in winter is that there’s a pernicious, unexpected kind of cold — you’re not able to walk around, and if it’s windy you’re exposed to the gusts as they whip off the water. 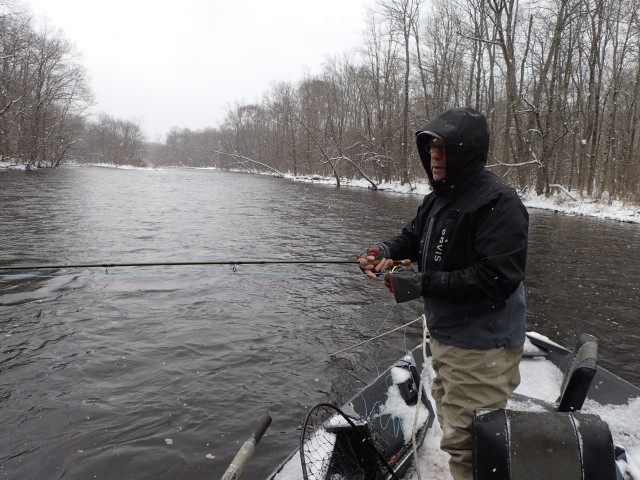 We hit the river with positive resolve at 2:30pm Monday, and although we gave it a good effort, no steelhead made it to the hoop. In fact, I didn’t have a single touch. Jenks had, at least, the excitement of a few takes. Timing is everything, though, and we clearly missed it (Sal from Legends on the Farmington was fishing across from us and reported many earlier fish to net from his group.)

Tuesday was float day with my friend James Kirtland of Row Jimmy Guide Service. There’s a technical description for the conditions we experienced — I think “shitty” is the term. We had snow and wind and cold, and let’s throw in a disaster bite for good measure. Jenks had a few touches, but no love on the hookups. My single take of the day produced a newly-minted coin of a skipper, and given the conditions, I took my 1-for-1 and ran with it.

So much depends upon a propane heater, glazed with snowflakes beside the white pizza box. (I love how often that poem lends itself to fishing situations.) Speaking of food, here’s a hot dining tip for those heading up to Pulaski: 11 North Bar & Grill. We visited on Taco Tuesday, and enjoyed three stuffed beefy tacos each for the grand total of $9. That’s not a misprint. Yummy wings, plus a good beer on tap list. 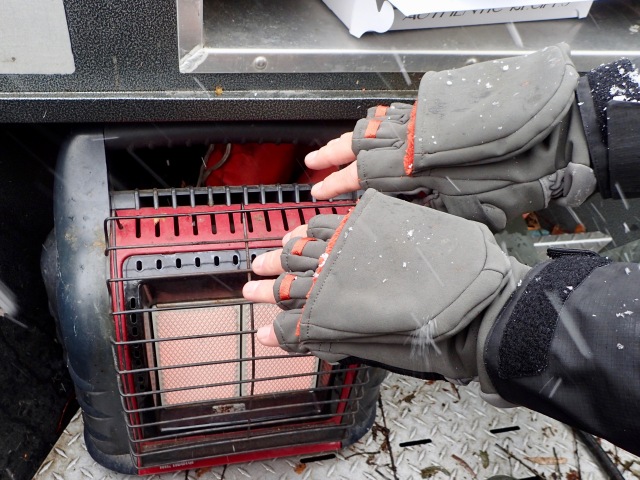 We performed seemingly never-ending eyelet triage as the mercury never made it out of the 20s for the entire trip. Stuff like Loon Outdoors Stanley’s Ice-Off Paste works…for part of an hour, then it’s back to ice patrol. 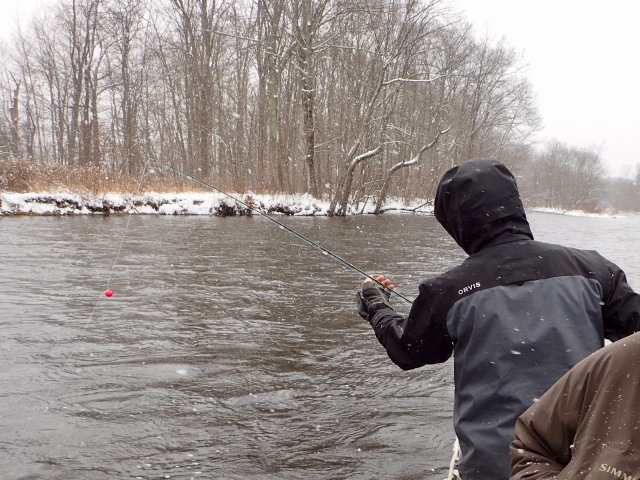 And then, there was Wednesday. On the river early: 17 degrees. Off the water at 3pm: 19 degrees. Hookups up and down the line were few and far between, with landings even scarcer. And it was just plain suck-the-warmth-out-of-you cold. So when my indicator dipped, I was happy that I got a good, hard, downstream hookset. That’s breath coming out of my mouth, not cigar smoke. Please also appreciate the lake effect snow shower, and Jenks’ fine photography.

I fouled one more, lost another to a tippet failure (had to have been nicked), and had a couple of bumps that never resulted in a tight line. But any day you can land a steelhead is a good day. And from the look on the angler’s face, regardless of the weather, that is the way to have fun, son. 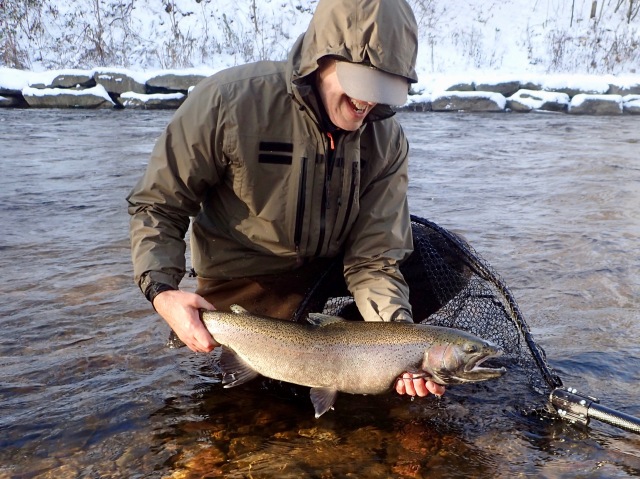