I waited two years for yesterday. A day after a heavy rain where the river would be up and off-color but still wadeable; preferably late summer or fall; some cloud cover; with most anglers opting out of fishing. Classic streamer conditions. Huck a bug at the banks, strip away, and wait for that telltale thud from a bruiser brown.

I fished three spots in the permanent TMA, and while all of them produced (including a smallie, the farthest north on the Farmy I’ve ever caught one) the action was slow. Still, I made the command decision to stay away from the recently stocked areas in the hopes of trading numbers for size, and that’s what happened. All trout to net were over 18″, including my biggest of this year.

The method: target banks with a full sink line, a longer (7-8 feet) leader and a deer hair head fly to get some neutral buoyancy going. Black is the classic stained water streamer solution, but they wanted it bright yesterday (nothing on black or olive — they were into white, yellow and chartreuse). Every day is truly different.

The type of trout you measure in pounds instead of inches, this pig was sitting six feet off the bank in a foot-and-a-half of water. Second cast, first strip, and he rolled on it. Right away I could see he was a good fish. Taken on a yellow Zoo Cougar, and a worthy opponent in a 750+cfs flow. Wonder what’s in that tummy? 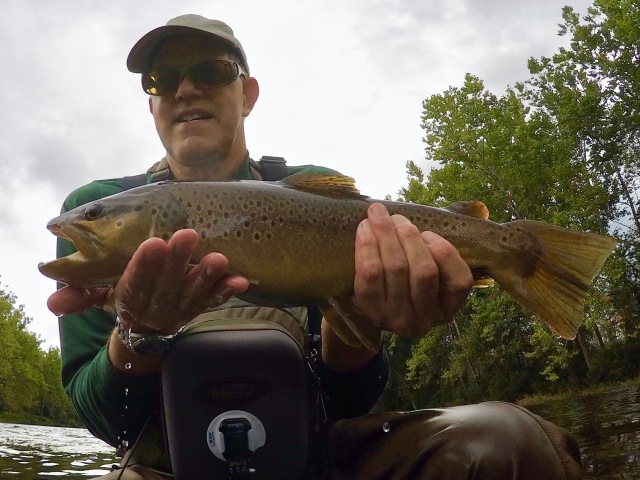