I went on a wee tying binge, and when the feather dust settled I was left with an 8-pack of Big Eelies. Some are old favorites, and a few sport new color combinations. That’s one thing I love about this pattern: it lends itself supremely well to all manner of color experimentation, and the stripers almost always seem pleased with your work.

Big Eelies hot off the press. Clockwise from lower left: pink/chartreuse/olive, grey/olive, Crazy Menhaden colors, Olive Fireworm colors, black/chartreuse, pink/olive/brown, then the two of the original classic. I can already feel that forceful tug at the end of a twitching strip. 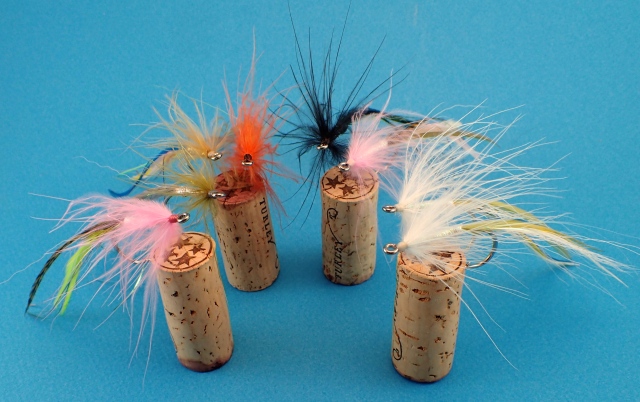 The Banana Squid, another classic from Ken Abrames. It’s different from most other squid patterns, and it looks nothing like what books would lead you to believe  a squid should be. Add the magic ingredient of water, and it transforms into a living, breathing organism than looks good to eat. Fished slowly and deliberately, it relies on organic movement and impressionism to fool the fish. 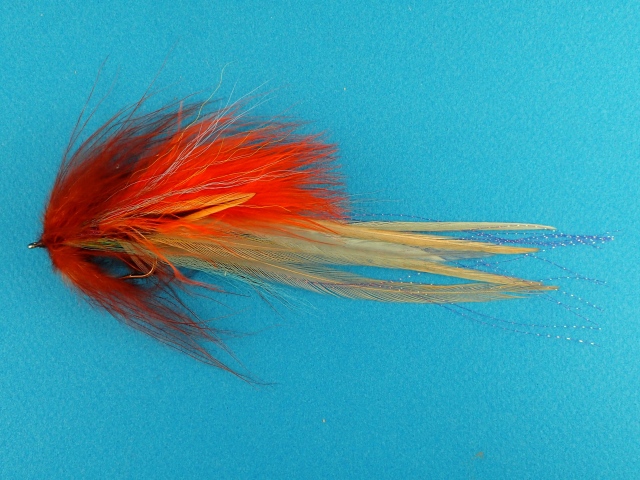 Hook: Eagle Claw 253 3/0
Thread: Black 6/0
Platform: 30 hairs grey bucktail
Tail: Three white saddle hackles tied in flat, then four ginger saddles (I used golden tan) to veil the white saddles, then sparse purple Krystal flash on both sides, then a short badger hackle on both sides, then a webby grey saddle tied in flat, then a full plume of amber marabou
Body: Purple braid tied to 3/8″ from the hook eye
Collar: A sparse layer or yellow bucktail one hair thick to extend to the end of the amber marabou, then a sparse layer of blue bucktail one hair thick, then a sparse later of red bucktail one hair thick
Hackle: Brownish marabou tied in near the butt of the stem, then wound and doubled 3-4 turns