Those of you with more than a passing familiarity with Roger Moore’s first turn as James Bond will recognize the reference. For my purposes, it was simply one of those days. Sharp hooks, but some decidedly obtuse hook setting.

Tee Hee does his thing. Now, if only I could do mine. 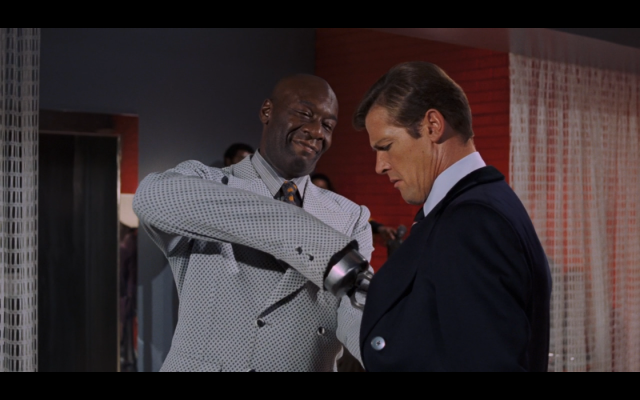 I dropped so many trout it was comical. OK, so most of what I lost was moments away from being netted, so I got my money’s worth of play time — like that rainbow that twice erupted from the depths like a Polaris missile — but this was ridiculous. Bad hook sets, bad luck, or a combination of both, but I suspect mostly the former. Well. Now we have something to aspire to next outing.

I’ve been on a nymphing kick, and I started in Spot A somewhere below the permanent TMA. Three fish, and one unidentified monster. The indicator dipped, I set the hook, and felt the bottom. Then the bottom started vibrating. And moving upstream. With the sensation of substantial mass. Suddenly, the hook pulled free. This came in some water I had never fished before, so I consoled myself with the knowledge that now I know where it lives. Till next time.

After I lost my nymph rig, I tied on a Hi-Liter streamer. Yes, you can catch a nice low teens wild brown on a day-glow streamer in the middle of the day in June in water three feet deep. This guy whacked it once, missed, then charged after the fly like a striper on a Gurgler. Funny to watch, and even more fun to catch.

Spot B was above the permanent TMA. Blanked.

Spot C was within the permanent TMA. What a dork I am. Not only did I drop a nice some-teen inch brown, I did it twice. The first time I was just about to slip him into the net when he popped. Male, big black spots, paddle tail. I could taste that fish. Fifteen minutes later, I hooked him again. Same spot, same fly, only he came undone after he thrashed about on the surface ten seconds into the fight. Like the beastie from earlier in the day, I know where he lives. As I was leaving, I muttered, “The fighting is in rounds. This is round one.” (Anyone get that movie reference?)