This year’s Block Island All-Nighter played out a little differently than in years past. Once I found out I would be flying solo, I decided to ask my 11 year-old, Cam, if he would like to go. He was all over it. I think he liked the idea of heading off for an overnight as much as he did the chance to go fishing. But I really didn’t care what his motivations were. It would be nice to have his company.

The last two BIANs were busts. My intel on the Island had warned me of epically slow fishing in the last week — “Be prepared to tour the Island to find fish” was the mandate. For a time, it looked like BIAN VIII would crap out. Then, a trickle of fish. And suddenly, the heavens opened and the light — hell, it was more of a beacon — of good bass fortune shined upon us. Here’s a little timeline and some photos from our adventure.

6pm-8:30pm: Take the six o’clock boat over to the Island. The surface is flat as a dinner plate. Speaking of dinner, no better way to start a BIAN off than with the fried scallop platter from Finn’s, washed down with an IPA draft.

My stash for the evening. You’re thinking, “Steve, why would you bring so many cigars?” Just in case. Someone might ask for one. Someone might deserve one for sharing the water. Or, on a dead-calm night like this one, I might forget my bug spray and be inundated by millions of biting no-see-ums. There’s no mention of cigars as bug repellant in the Boy Scout Manual. But this ex-scout was indeed prepared. 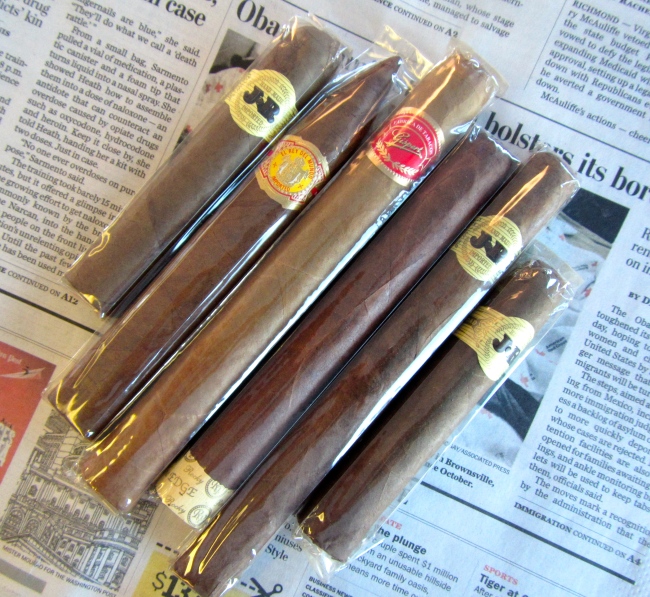 No Fisherman’s IPA this year, so we went with Loose Cannon. Another hop bomb with some nice fruity notes.

8:30pm-11pm: We arrive at the spot. It is mobbed. Like, we get the last place to park mobbed. Not to worry, I tell Cam. It’ll empty out in short order. Witnessed: The largest, longest school of sand eels I’ve seen on the Block since 2007. The bait was smaller than normal for this time of year: matchstick to 2″ long. But scads of them. And then some. The water looked like it had a moving, breathing oil spill beneath its surface. Cam fishing with a 1/2 oz. bucktail jig bangs up some fluke. Dad goes touchless. We walk to another spot. Dad’s proven fish-producing spot. There, Cam, you see? A couple bass rising. We display our wares to them. Nothing. Hmm. Not usually how things play out on the Block. We borrowed some bug spray for Cam, but he’s still getting pummeled. Cam announces he’s tired and is ready for nap #1. We start the long walk back to the truck. Looks like it’s going to be one of those nights.

11pm-1am: The stars! What a galaxy we live in. The air so calm I can blow smoke rings. The ocean is still mirror flat. So flat that I can easily see those rise rings thirty feet off shore. Multiple active feeders. I tell Cam his nap plans have been placed in a holding pattern. I’m going to cast to some fish. They seem oblivious to my fly. No wonder. There are enough sand eels here to feed every striper in Rhode Island. I connect with a few, and let Cam reel in a couple. At midnight he decides to call it. I keep fishing and catch a half-dozen or so more. This is already better than most of the last two years.

And I have no idea what’s coming.

Tight lines with the long rod. Cam has a knack for getting stripers in quick. No wonder. Look at the angle of the rod. I may have reinforced fighting the fish off the reel and the butt, but he basically taught himself.

One of Cam’s prizes. Most of the bass from the first part of the evening were in the 18″-24″ range. Block Island remains the only place I’ll put a sub-double-digit pounds striper on the reel.

1am-3am: I’m walking along the beach, trying to decide where to fish, when the decision is made for me. A squadron of seagulls are milling about the water’s edge, chattering excitedly. Bass have the sand eels trapped and are picking them off with gusto. The gulls are cleaning up the leftovers. All I need to do is choose a rise ring, lay my fly over it, then start stripping. Sometimes the fly barely has a chance to get wet before the glassy surface is shattered and I’m on. It is a school of good stripers, ten-to-fifteen pound range, and every one of them came tonight to eat. For the better part of 90 minutes, the action is non-stop. It’s like striper fantasy camp. It’s so intense that I wonder how much longer it — or I — can go on. One fish obliterates the fly — this one’s over 30 inches — and as it rolls on the surface it spooks what look like another dozen stripers the same size.

Best of all, what I predicted earlier has come to pass. There isn’t another soul on the beach.

A 15 pound Block striper, classic big shoulders, belly full of bait. I know, fish on sand is not ideal. I risked this one for a photo; all her sisters were lipped and released within safe confines of the ocean.

The white cavern, the last thing a sand eel sees before it disappears into the void.

3am-6:30am: This time of year, the first glimmer of light appears in the east around 3:45am. I fished hard in those first forty-five minutes because I could sense I was running out of steam. I continued to walk along the beach, targeting active feeders. The bass seemed to get more aggressive as the sun’s disc neared the horizon; several times I had fish on as soon as the fly hit the water. By five I was done. I chatted up a a few anglers on the walk out, and presented a fly to a gentleman who proudly told me that today was his 81st birthday. After rinsing down our equipment, we headed into town to wait for Ernie’s to open. Breakfast is going to be glorious.

The pre-dawn crescent moon accompanied by the morning star. If you look closely just to the left of center, you can a see the remnants of a rise ring. 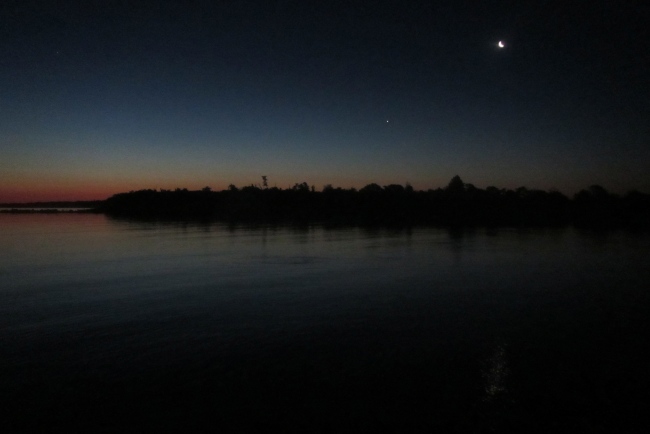 Geez Louise. I gotta be more careful with that belt sander.

6:30am-8am: Breakfast. Three pancakes for Cam. Pancakes and eggs for dad. Bacon for both. Off to the dock. Delirious from lack of sleep. Or all those stripers.

I can’t remember which.

Cindy Loo-Who has been punching my car ticket for decades now. Our meetings are always bittersweet: “Hello, old friend,” combined with the melancholy of leaving my favorite Island.