Speaking of seasons, ’tis the time to break out ye olde bamboo dry fly rod and cast to trout feeding on sulphurs.

I started out swinging wets on the lower river at 4:30pm. Several hatches were underway, including sulphurs and March Browns. Not a riser to be seen, which may explain why, to my astonishment, I blanked. I am always surprised when I don’t catch anything on wets during a hatch. This was mighty humbling.

Although I love the wet fly, and am an avid practitioner of the ancient art, I do have a soft spot for the dry. After giving the lower river a  half hour, I headed for dry fly water in the upper TMA. At 5:30pm, there were already two anglers in position. I moved to the head of the pool, not an ideal location due to several murderous current seams, eddies, and water that sped along in one place while languishing in another. This would require a series of complex tactical mends to get a good drift. That was fine with me. We like a challenge at Currentseams.

Dense fog blanketed the water (353cfs, and a chilly 52 degrees). A decent rise during the first emergence (sulphurs, March Browns) from 5:30pm-7pm. I was rusty. I dropped the first six trout I hooked. The action waned from 7pm-7:30pm, then picked up again (sulphurs, March Browns, grey caddis, BWOs). I finally got my mojo back, and landed every trout I hooked until 9pm when I called it.

Moonrise through the fog over the Farmington. When I took this shot a little after 9pm, I was the only one in the pool — besides a bazillion bugs and scores of hungry trout. 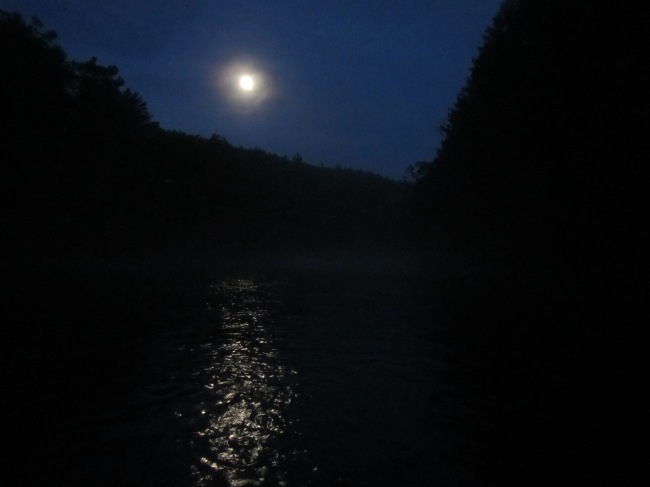 I fished three patterns tonight, and caught trout on all of them: size 16 Pale Watery Wingless Wet (treated with Frog’s Fanny and fished on the surface), size 14-16 cream Usual, and a size 10 Light Cahill Catskill once it got dark. I am always amazed that people will leave a pool around 8pm. This time of year, the slot from 8pm-9pm is double-bonus action time. I lost count of the number of trout I landed in that hour. The last two I caught, I couldn’t even see the fly, and the last, not even the rise ring. I just lifted my rod tip and there he was.

My original leader length was 12 feet (6x tapered leader). Once I added three more feet of 6x, I found it a lot easier to get truer drifts.

You haven’t eaten in hours, and now you’re standing by the counter at Five Guys, desperately wanting your burger and fries. Whoever decided to put a big box o’ peanuts (note scoop, encouraging large portions) to  ease the torture of anticipation is brilliant. Absolutely brilliant.