Fished the Farmington from 3pm to about 7:30pm. Today’s mission was to hit a bunch of spots I haven’t fished in a long time, swing some wets, anticipate a strong evening hatch, and hope the trout were looking up. Things started poorly when I forgot my fishing hat. I mean, I need my fishing hat. My head felt naked. Exposed. It just wasn’t right. Serves me right for wearing it to Sunday’s soccer games, then taking it into the house (the hat stays in the truck when not in use. Idiot.) Spot A was a run that dumps into a deep pool. Swarms of mating black caddis (size 16) everywhere. No hits. I was surprised. Moved down to a second run where I scored Rainbowzilla. He took a size 10 soft-hackled bead head Pheasant Tail on a dead drift. This guy went straight to the reel and peeled off twenty feet of line. Just as I was netting him, he popped off. My rig flew into a tree. Lost it trying to retrieve it. I blame the lack of a hat. Motored off to a tricky wade where I was sure I’d get into trout. Nope. Just juvenile salmon. Two of them. A hundred yards down, hard against a bank, is a deeper-than-you-think little run. Same drill: dead drift, second mend, and I’m on with Son of Rainbowzilla, another some-teen inch brute. Unlike the first rainbow, this one had been in the river for a year. Deep pink lateral band, fatter than Mama Cass, and flawless paddle fins. Netted him, then lost him when he leapt from the net as I readied the camera, snapping off the bottom two flies on my team of wets. This bad mojo is clearly what comes to those who are foolish enough to leave their hat at home. The next two runs involved a lot of walking for absolutely no catching (have I mentioned that I forgot my hat?). Ended up at a place where I was sure the late afternoon transition into evening would bring a substantial hatch of Light Cahills or Sulfurs. Instead, I got a picking-up-breeze and ominous clouds …but nonetheless, some trout willing to jump on. I took two more rainbows in a half hour. Then the heavens opened up. Just when I was saying, “OK, time to go” out loud, bam! A nice wild brown. All three fish again took the point fly, a simple bead head, plain rabbit fur fuzzy nymph — only every take was on the swing. I got totally soaked on the way back to the car.

I really wouldn’t have gotten so wet if I’d had my fishing hat on.

A bronze totem from the wild tribe. He’s the reason I took such a good soaking. Thanks, friend. 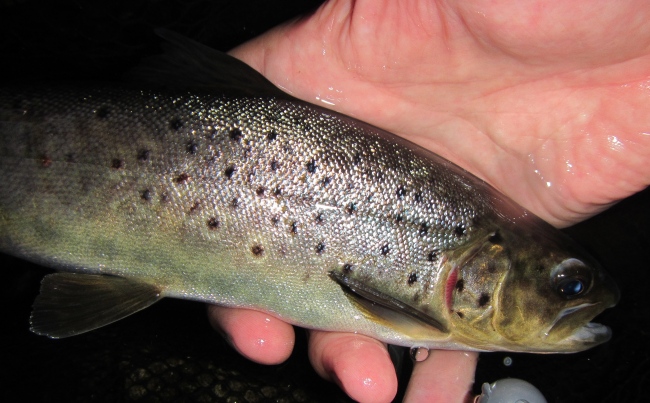 These simple white flowers are all over the river. They have dark and light blue cousins, too.