The old saw goes, “Wind from the east, catch fish the least.” But ever since I fished my first easterly, I’ve had a hard-on for them. Especially the ones that always seem to roar through this time of year. Not only do they they keep the meatballs away, I also find the fishing is often surprisingly good.

Yesterday was overcast with an unrelenting easterly blow of 20-30mph. This was comic book casting wind. Into its teeth would have been impossible with a thick floating line. With the wind behind me, back casts were an exercise in do-your-best, and my strategy was basically to loft the line into the banshee and let her deliver the goods.

Seinfeld had the puffy shirt. I had to settle for the puffy rain jacket, billowing Gore-Tex courtesy of the bitch of April. 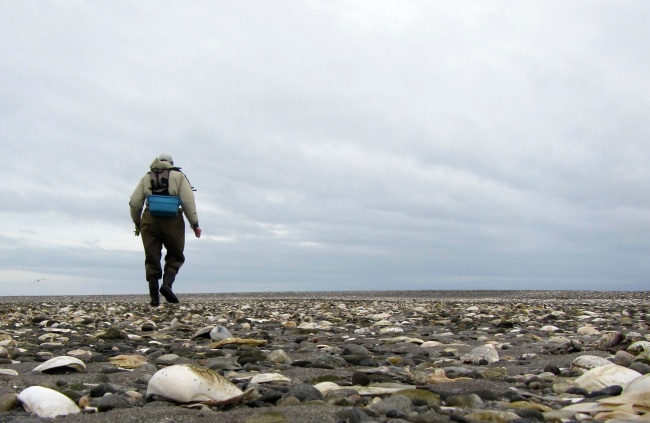 About ten casts in I took my first striper. Then, save for a couple follows, nothing for an hour. That’s an eternity in these conditions: strong moon tide current in an exposed estuary. Windblown water pouring in from the ocean over a sand bar, colored that odd yellow-grey/sea green you get with an easterly. Frosty whitecaps and chop, and some perilous looking rips. Seaweed and organic  flotsam everywhere. Forty-eight degree air temperature, but with the wind chill off the ocean, I could barely feel my fingertips. Windblown rain showers that felt like BBs against my jacket.
Even though it was the middle of the afternoon, I was certain there were fish around. Yet I wasn’t getting any action on my smaller (3.5″) soft-hackle. I thought that maybe it was getting lost in the maelstrom. Let’s break this down. The one hookup I had was at the surface. Perhaps something bigger and easier to see might work? The best solution I had in my box was a 7″ long, all black deer hair head fly. On it went. And on they went. I lost count of how many stripers I caught in the next half-hour. It wasn’t a fish on every cast, but it was a follow, a nip, or a hookup on every cast. Tremendously exciting to see the takes right near the surface amidst the storm surge. The spray from the hit would sail into the air, get captured by the wind, and shower the surface with a liquid blast radius.In the end, it was as simple as this: In rough water, make it easier for the fish to find your fly.

One comment on “The wicked witch of the east”