Spent a few hours today doing some advance scouting for Saturday’s wet fly class. Found fish everywhere I went. Gloriously alone today, but that won’t be the case on Saturday. Water was a crisp 50 degrees, skies overcast, and a few showers here and there. We need more rain than this.

Not a lot going on bug or rising fish-wise, but I did see some light tan caddis, about a size 16, a few lonely Paralepts, and mounds of miniscule midges. I was fishing a Squirrel and Ginger as the top dropper, Leisenring’s classic Iron Blue Dun in the middle, and a black bead head grey soft-hackle nymph on point. The trout were split right down the middle, half of them on the Squirrel and Ginger, half on the point fly. They took the fly with gusto. Powerful, demonstrative hits.

A lovely Farmington River holdover brown that took the top dropper, a Squirrel and Ginger, on the dead drift. 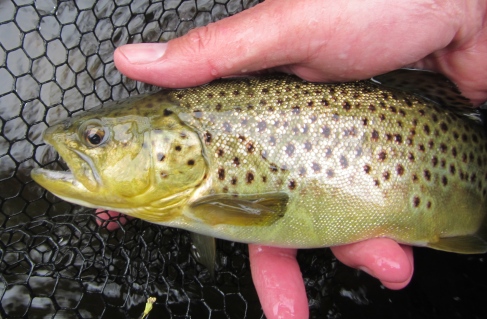 Two trout of note. The first came where a riffle dumps into a long, deep pool. I was being lazy, mindlessly fishing wets downstream, when I looked above me and saw this pocket that I’d swung flies through a thousand times before. I made an upstream cast to it, letting the flies dead drift, when I saw a trout flash at an emerger just below the surface. Just as my brain was forming the thought, “Must cast there again,” I realized the emerger was my Squirrel and Ginger. It was a  handsome holdover brown, metallic and buttery.

A little farther upstream, there’s a sapling that hangs over the river like a drunk caught in mid-stagger. Its branches drag in the current, and the shade from its leaves clouds the already mysterious waters beneath it. It’s one of those spots where there’s always a fish. But not today. Well, not on the upstream side. Just below, whack! This brown did her finest impersonation of a steelhead, cartwheeling out of the water multiple times. I could see it wasn’t a big trout, but I almost put her on the reel. Up and down the pool she went. Foul hooked, I wondered? Nope. Just a fat, obstreperous holdover brown, about 14″,  with the Squirrel and Ginger lodged neatly in the corner of her mouth.

For a moment, I considered putting her on the reel. She had some shoulders, this one. 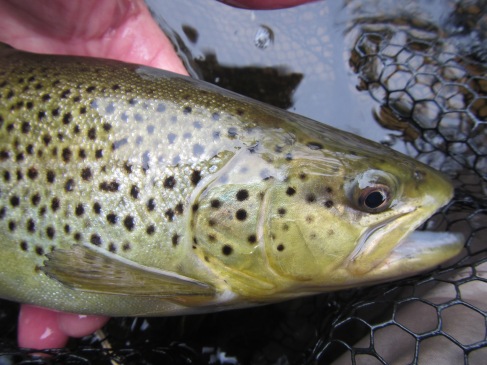 Now, if the trout will only cooperate Saturday.

It’s wildflower season on the Farmy. I don’t know what these are, but they’re everywhere. 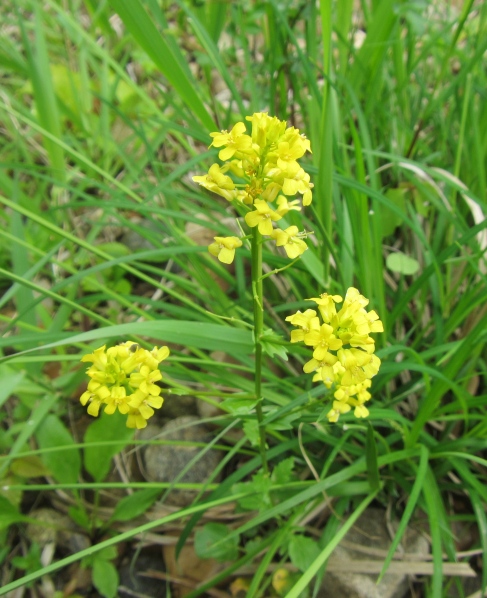 One comment on “Farmington holdover browns on wet flies”