This is a fly with a great backstory.

The old-timers up in Maine (or down East, if you’re going for authenticity) who were fishing for brookies thought their quarry was highly territorial. So after they creeled a fish, they’d clip off one of the fins and use it for bait. And what an attractive bait it was: shiny, deep orange, contrasted against dramatic black and white bands.

An enterprising fly tyer named Phil Armstrong realized he could replicate this bait in the form of a married-quill wing wet fly. And thus was born the Fontinalis Fin. “Fontinalis” from the second half of the brook trout’s taxonomic name, Salvelinus fontinalis. “Fin” for rather obvious reasons. What a brilliant concept. 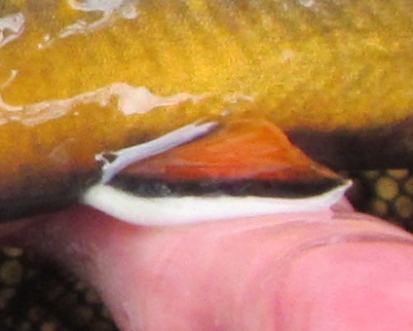 While it’s tempting to look at the flies featured in the color plates of Berman’s Trout (this fly appears on plate 10) as more of an exercise in tying legerdemain than practical fish catchers, I can tell you from experience that this fly does work. It’s pretty simple as far as married quill wings go, and the rest of the pattern is something anyone with basic tying skills can do.

Tying notes: If you’ve never tied a quill wing, don’t start. Your first quill wing can be the fly-tying equivalent of the Bataan Death March. While I was kidding (mostly) about not starting, I think it took me over a half hour to tie my first quill wing — and that was accompanied by a generous use of rather colorful language. Once you get it, though, the process becomes easier. I’m often asked at classes and demos, ‘How do you glue the different quill sections together?” You don’t. The edges of quill fibers are like velcro — they stick together quite nicely. There’s a specific technique to matching quills (the wings should be a mirror reflection of one another) and marrying the sections. Perhaps someday I’ll post them. In the meantime, you can probably find a good how-to by doing a web search. Also, the quill wings should sit a little higher on the shank so as to not hide the body; I was in a rush to finish this fly, so I plead sloth.

2 comments on “A Classic Bergman Wet: The Fontinalis Fin”