Four fishing trips in three days on the Cape sounds good to me. So let’s get started.

Thursday 6/11 PM: Arrival. The weather wasn’t great — wind and rain storm remnants — but we (myself and Number Two Son Cam) had a two-hour night window, so we jumped on it. We fished a mark in Chatham with a ripping current. I wasn’t crazy about the speed of the tide, but there were bass, albeit in micro form. I hooked up on my first non-cast — I was simply stripping line to get the shooting head out. Cam, who was spin fishing with a Yozuri Crystal Minnow, modified with single barbless hooks, landed two. We called it after and hour so we could rest up for our morning outing, which was…

…the Brewster Flats. Before: 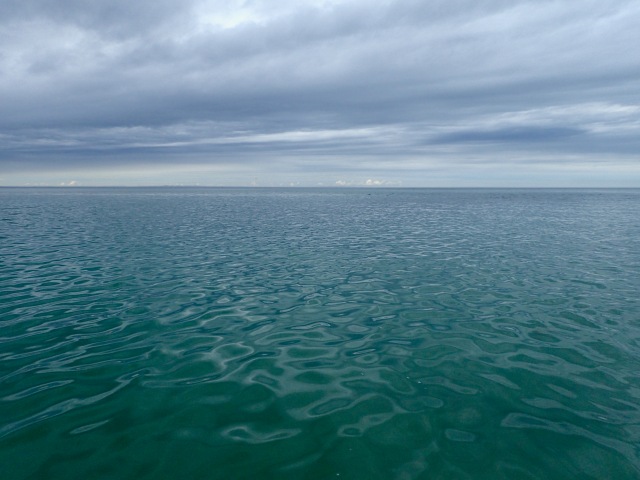 And after. This is the largest tidal flat in North America. While it’s unique and beautiful, it’s one place you don’t want to overstay your welcome.

Friday 6/12 AM: We met up with guide Cynthia Harkness of Fearless Fly Fishing. Cynthia is professional and knowledgable and does a great job communicating the wonders — and potential dangers — of fishing the flats. Despite the crowds, she picked out a great mark for us. Larger cruisers are always a possibility on the flats, but our lot was to be trading size for volume. On the plus side, skipper bass are a hoot on the surface. I wasn’t hooking up with a submerged fly, so I tied on a white Gurgler. Hilarity ensued. I lent Cynthia one of my spares so she could join the party. As the tide slacked, the bite faded, and we headed back to shore.

Striped bass will color match to their surroundings. These coin-bright skippers had a sea green back to contrast with their brilliant flanks. Here’s Cynthia’s first of many flats bass on a Chartreuse Gurlger. 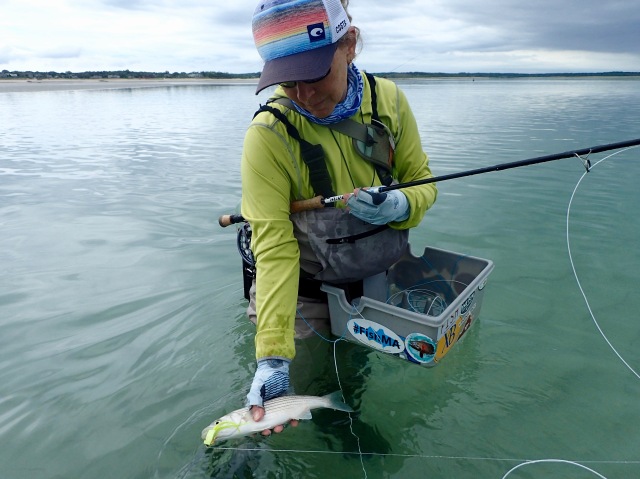 Friday 6/12 PM: The change of light can be a magic time, so we secured our mark early. I was hoping for some larger players, but it was skippers and more skippers. Cam and I hiked down the beach a half mile to try another mark, but it was still skipper city. By now it was night proper, and the tide was really moving. All these small fish proved to be my downfall — along with an out-of-the-box reel on which I hadn’t yet set the drag — when a 15-pound bass came calling. I should have known from the two rolls on the surface that I had a legal-plus fish. But I made the rookie mistake of not setting the hook. Once the bass realized it was hooked, it raced out into the channel, taking way too much line for my liking. When it reached deeper water, it sounded. I frantically tried to gain line, and when I did I couldn’t budge the fish. Increased pressure from me resulted in the sickening sensation of a slack line and the knowledge that it was all due to operator error.

Back at the house, I contemplated my shortcomings over a dram of 18-year old Sherry Oak The Macallan.

Saturday 6/13 PM: Solo trip. Revenge night? Not quite. The big one eluded me, although I did enjoy the flush of a half-dozen bass in the 20-26″ class over the course of 3 and 1/2 hours. Tremendous sport in a powerful current, and as an added bonus I got to learn the particulars of the drag. My last bass came after midnight. I’d moved to a different mark with less current. I missed him first shot, but a few casts later he came back. A perfect fish for a perfect ending. I hummed aloud as I followed my single-file footprints in the sand back to the Jeep.

Last bass of the trip, taken on a 6″ white deer-hair head contraption. 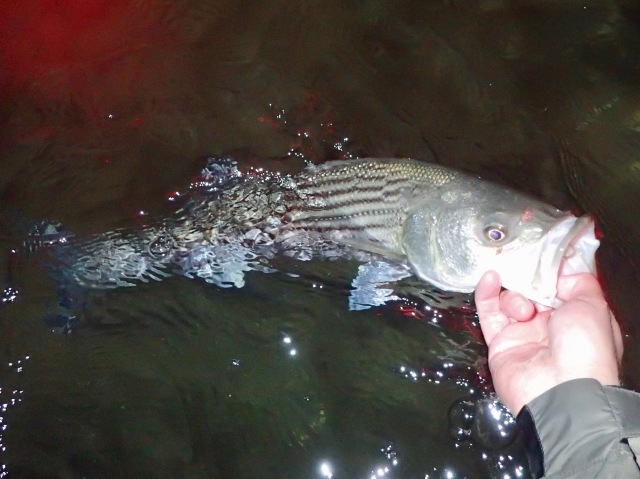 One comment on “Cape Striper Report: XS, M, and one regretful L”