You’ve heard me tell that my mother used to say that life isn’t fair.

I hated hearing that, but over the years I’ve grudgingly accepted it. I know she had my best interests in mind. But if she really wanted to help me, she would have added, “And steelheading is even more unfair.”

Cam and I fished the Salmon River last week. We had cold, warm, ice, snow, and sunshine. We had 350cfs and 750cfs. We had fish on and fish off. And we had the cruel fickleness of the beast and the sport.

Day One. After a slow start, Cam gets into a slob of Lake Ontario’s finest. He went three for three. This is his first of the morning.

It was Jim’s birthday, and since we were both taking a break we insisted that he fish and catch a celebratory steelhead. This guy’s good. Here’s proof.

A different perspective on the grip-and-grin. We kept all the fish in the net in the water until it was time for a quick photo op. 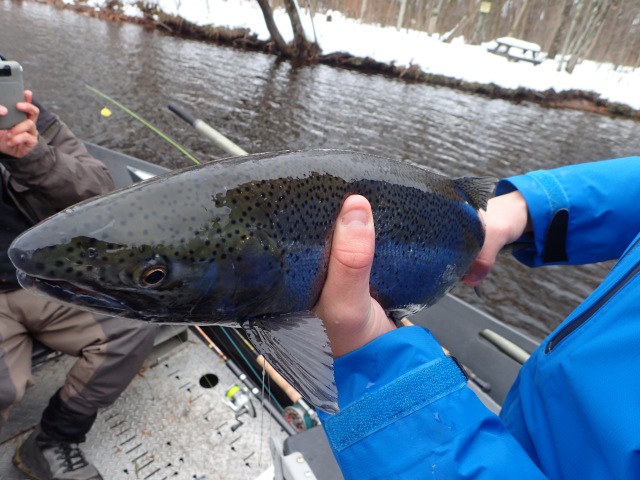 By now, you’re asking, “But Steve — where’s your fish?” Ahem. I pounded the same water as Cam all morning on day one and not. A. Touch. Steelheading isn’t fair, remember? On the way downriver, I fouled one first cast in a deep hole. Farther down, I went one-for-two in another deep pool while Cam blanked. Are we seeing a pattern here? This is Cam’s last fish of day one. I dropped my first fair-hooked fish to an incredibly bad set. The second was camera shy, but was about the size of this one and polished metal bright. One steelhead to boat makes it good day.

Oh, the injustice of Day Two! This tank of a buck is the only fish we boated. Now, anyone who’s steelheaded for years can tell you that fish are often lost to operator error. They’ll also tell you that you can do everything right and still lose the fish. Friends, I’m here to testify (with Jim and Cam as my witnesses) that I had four indicators go under, and I was dead-balls-on every hookset. Fast, sweeping downstream, hard — sticky sharp hooks — and every fish came unbuttoned. Three right after set, and one that I managed to keep on for a couple runs. You can do what you can do, and beyond that it’s up to the steelhead gods. Repeat after me: Steelheading isn’t fair! 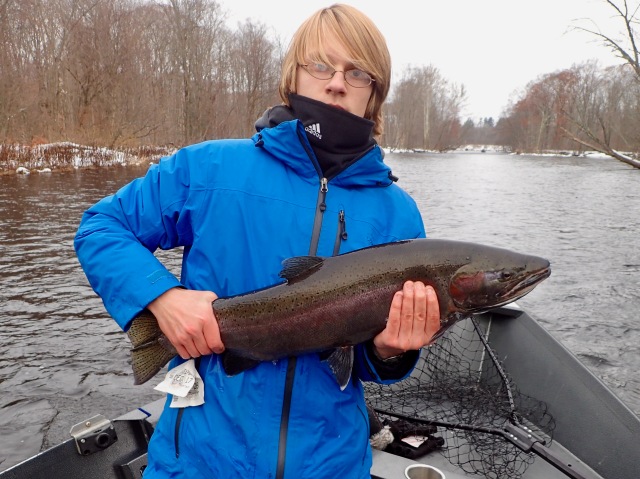