Followers and readers already know that I tend to fish how, where, and when others don’t — especially when it comes to stripers. I’ve always considered currentseams to be a teaching platform, and to a large extend that is what drives the content of this site. Still, there are times when I feel like a lonely island being battered by the waves of conventional wisdom. So when I get a letter like the one below, it restores me. I’ve edited some of it for brevity, but I think its message is important. Fans of 1776 will get the title reference — and the importance of the answer, “yes.”

“I believe in giving credit where credit is due. I also believe that if someone has helped you, made a part of life more enjoyable, or provided valuable guidance, you should thank them. currentseams has done all three of those things for me.
I moved to Barrington, Rhode Island 7 years ago. I was a sophomore in high school and by then an avid fly fisherman and fly tier of, again, 7 years. I knew little of Rhode Island’s saltwater opportunities then. I was a die-hard trout fisherman, but with the Farmington 2 hours away and no drivers license I thought I should figure out how to have fun in my own backyard.
After multiple run-ins with striped bass eccentrics my father and I were excited. Yet in our haste to get on the water (in reality it was just MY haste) we forgot to really take our time to learn and listen. “Whats the best fly? What’s the best line? Where’s the best spot? Okay, thank you and goodbye!” We wanted to know what everyone else was doing so that’s what we got: intermediate lines, weighted flies, and the strip retrieve. It wasn’t a productive spring, and you can bet our disappointment had us sticking to trout.
With my intermediate line and my Clouser minnows I set out to really figure out this whole striped bass thing. I had done the research. I knew they were around. Now I just had to catch them. This time I had some success. I got a better understanding of tides and where to find fish, but I still fished fast and deep because its all I knew and all I was told. Countless times I lamented my setup as stripers gorged on silver sides right before my eyes. Damned my sinking fly!
I decide to change it up. Time to ditch the internet and get some ink in my nails. Time to sort through my stacks of Eastern Fly Fishing magazine. After some digging I found it, an article titled “South County, RI: By Boots or By Boat”. I don’t have a boat, but I certainly have some boots. This could be good. The article featured beautiful imagery, informative writing, and a picture of a gray-haired man in all black fishing in a trout stream? What?
The caption reads: On a foggy day, the South County salt ponds and connecting estuaries closely resemble the English countryside. It’s no small reason that the original settlers called the area New England. And it’s why native son Kenney Abrames favorites trout and salmon techniques in the salt.
Not a trout stream, but he was fishing it like one. Who is this Kenney Abrames? A quick internet search bears links to A Perfect Fish and Striper Moon. I scroll down a bit more and there it is, a search result titled “Ken Abrames- currentseams”. I clicked. I read. I explored and I never looked back. It was as if a whole new world had opened up to me. I blazed through currentseams. I quickly bought and read Striper Moon. I bought some floating line. And I put my stores of bucktail and peacock herl to work.
Funny enough, it worked. As soon as I got back from school I began catching striped bass using sparse flies, drifts, and swings. I was having a blast. It felt so satisfying to read something, execute what the writing said to do, and have the desired result.
I (also) realized something very important. This whole time I had been looking to you and Ken for absolutes. But there are no absolutes in fishing. There are only problems and solutions. As I began to re-read Striper Moon and currentseams I started to understand the true message behind both works. That message being this: Objects do not catch fish. People do.
I began to learn that there was no one fly, or one technique, or one rod, or one fly line, or one anything. Every fishing situation is different and it takes a creative angler to solve the riddle of each one. It was with this relization that I stopped looking at Striper Moon and currentseams like they were the Bibles of striped bass on the fly. These works are shared knowledge, not commandments.
Through the help of currentseams I have become a more creative angler. I have embraced the greased line swing, the floating line, and have even created my own fly as a solution to a fishing problem. Thank you for keeping alive the old traditions of striped bass fly fishing and for sharing your insights with the world. Keep up the good work and I cannot wait to read your next post.”
~
Thanks for making my day, Sam.
~
If you want to catch the fish that not everyone can catch, then don’t fish like everyone else. 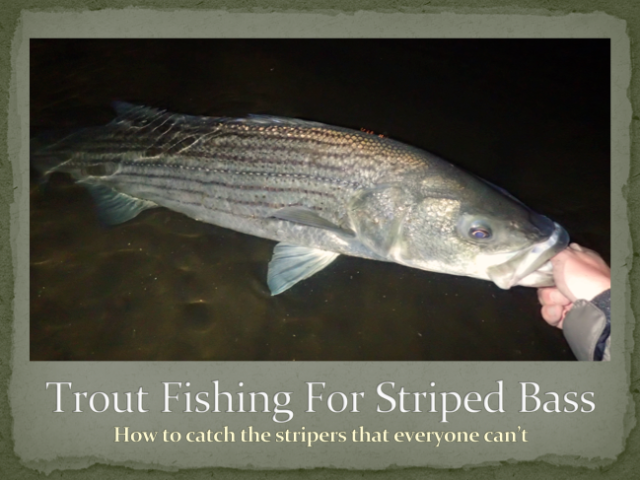