We can endeavor for hot, but sometimes you’ve got to take what nature gives you. I fished the TMA from 5pm-8:45pm last night, dedicated to the smallmouth cause. I started off with a white/chartreuse conehead bugger in a mix of sun and shadows and caught a bazillion smallies from 4-6″. That was fun, but it really wasn’t why I was there. So I headed to another spot that would be completely in the shade.

This second run was a bona fide honey hole for me last summer, with plentiful bass, and some pushing the foot-long mark. On this evening, it was a bittersweet reminder that every year is different. One dink was all I could manage.

In fact, it took a while for things to get going. The best fishing really didn’t happen until full dusk, with the typical it’s-dark-now shutoff. The big one eluded me, but I took several fish that pushed 12″. Most of the smallies were keyed on emergers, and unlike last year there were stretches where they ignored the streamer. (And several instances where they pile-drived the bug the moment it hit the water.)

And you can’t make this up: around 7:30pm, I was swinging a Zoo Cougar through a pocketed run. Bump….BUMP. Fish on. As I was stripping it in, I said out loud, “You think you’ve got an 18″ brown, but it’s really an 8″ smallie.” A few moments later, I realized that it was a trout — a big old rainbow. Once I knew what I had hooked, I hauled it in quick. The fish was in great shape, high teens, fat, intact fins, deep pink band. I was going to take a photo, then thought better of it, and released the fish, which swam off in seemingly great spirits.

Handsome fish. This guy took the bug on the dangle near the surface, and treated me to several frantic aerials. I like the translucency of the pectoral fin. 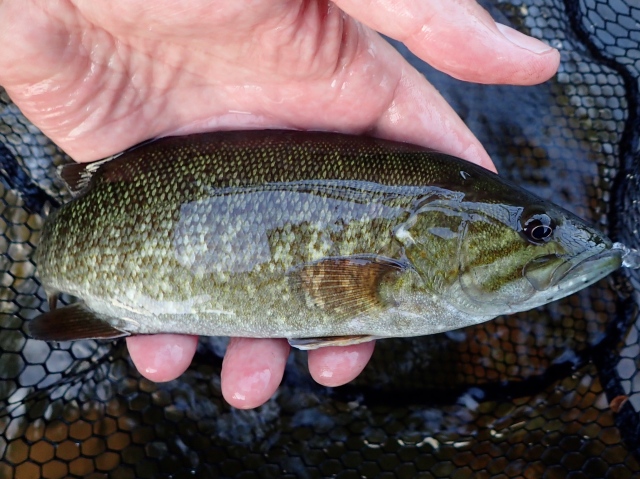