Why wait till November when you can have steelhead April? And so it was that Gordon and I found ourselves drifting under the Altmar bridge at 7:15am Thursday morning under the skilled oarsmanship of my favorite SR guide, James Kirtland, AKA Row Jimmy.

So. If you remember, the fall 2015 steelhead run was — ahem — disappointing. This spring’s run has been its reflection. Still, one can’t complain with full sun, temperatures rising into the high 50s, a couple cigars, your youngest son’s steelhead baptism, and no clients calling or chores to be done. I’d never been steelheading in the spring. (It’s quite civilized compared to the fall.) Now, all we needed was the banishment of the dreaded skunk.

Dad kicks things off with a still winter-dark buck. Got him in some fast water on a horrible double egg pattern I tied up. If you look closely, you’ll see why I nicknamed him “Uncle Milty.” 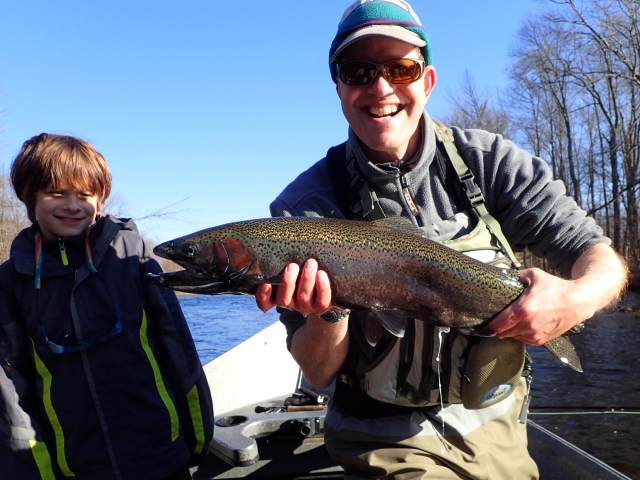 I took his little brother about 50 yards down river. Shortly after that I dropped a good fish moments after hook set. I don’t know what happened there, as I was quick on the draw and had a sticky sharp hook. Such is the game. Next, it was Gordon’s turn.

Gordo’s a true DIYer. He cast, managed the drift, set the hook, and fought the steelhead all by himself. We’ll call this the action shot.

Jim is an exceptional guide. Tremendous knowledge of the river, always with the positive waves, and some serious netting skills. And let’s not forget he’s a good teacher, seen here congratulating his star pupil moments after the battle won.

I had one more fish on between Pineville and 2A, but I forgot I had ratcheted my drag down to an unforgiving level to free a snag. Rats! The fish ran, and  let’s just say there was not a favorable result for me when the line came tight. Little things, Steven. Little things.

Taken as a whole? Most definitely a 10.