Contrary to popular belief, the best time to go fishing isn’t when you can.

The best time to go fishing is when your mother-in-law has come to visit for the weekend.

The idea of sub-freezing temperatures and snow sounded just about right. Steelhead weather. I figured the river would be deserted (it was — I had my pick of the water). I also figured between the romance of snow flakes and deep overcast, the big browns would come out to play (I figured wrong — only one half-hearted bump in three hours).

Stanley’s Ice-Off Paste is a nice concept, but it’s only good for about a half-hour. Fishing streamers doesn’t help.

I bounced all over the TMA. Spot A was an overhead deep run. Next, I walked several hundred yards through the woods to be able to fish a quarter-mile stretch of water. Then, a sortie to a new honey hole I had discovered last time out. One bump, no return. Ended up at another way-deep run where I caught a very nice stick and lost two flies. Streamers were the method, and I experimented with both bright and muted colors as well as retrieves. No interest in anything. River was down, about 225cfs, and running clear. Water temp was down, too, to 34 degrees, and I’m sure that was a negative influence. A few stray midges and some W/S Caddis here and there.

How Mother Nature cleans house. After Wednesday’s and Thursday’s wind, the forest floor was littered with shards of dead trees. 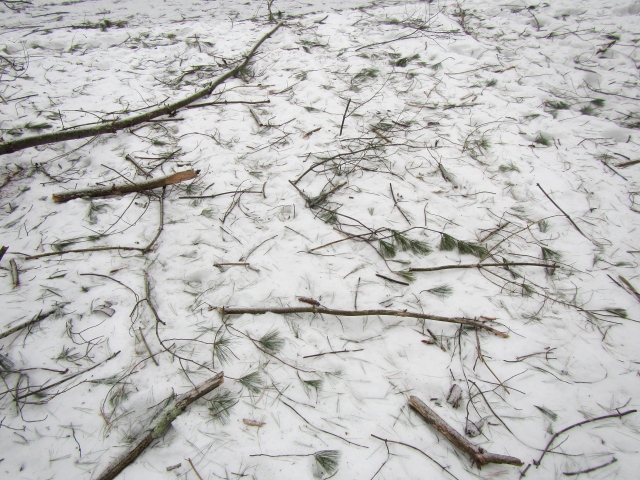 But I was alone and fishing. If anyone had asked me, “Any luck?” I surely would have answered yes.