I had taken about six steps into the brook when I fell in. A poor foothold, a little water ballet in a desperate attempt to regain my balance, then flat on my seat, left forearm soaked and a shot glass-worth of water into my waders.

Well, I thought, things could only get better.

They did. The creek was up, but at a perfect medium-high level, almost imperceptibly tinged, and running at a cool 63 degrees. What’s more, the skies were a grey block of granite. Rain was coming. But for now, it was just me, the woods, the brook, and the trout.

How you can tell it’s mid-June in the Connecticut woods. Our state flower, the mountain laurel, grows wild anywhere there’s shade. Some of the shrubs don’t produce flowers, but plenty of them were decked out in their white streamside finery. 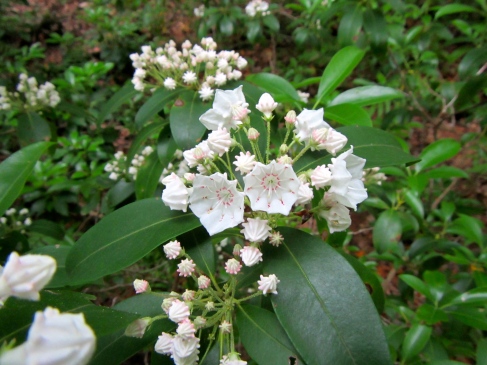 I spent the better part of the morning committed to the dry upstream cause, even though I knew it was costing me fish in some of the deeper pools. Most of the trout I raised were small — three inches or less — and very few of them were actually hooked. That was OK with me, though. Just to know they’re there tells me the brook is in fine shape, and those fish will be seven-inch lunkers in a few years.

My best brookie of the day took a dry presented upstream in a dappled seam that rushed along the side of a large boulder. She ran all the way into the bottom of the next pool. Terrific little fighter, this one.

One product of receding high waters is that the fish are spread out in the brook. I found trout almost everywhere I went, including some places where I usually don’t. Many times I could see them bull-rush the fly (a size 16 Improved Sofa Pillow) as soon as it hit the water. When the water’s up like this, I like to plop the fly in the middle of a glassy micro-pond at the edge of a plunge pool or current seam. The brookies suddenly  materialize from beneath the maelstrom, or the inky protective edge of underwater structure. I had a lot of first cast hits today.

Not much going on hatch-wise: midges, mosquitos, and a few stay caddis.

On the way out, I decided to take a page from my recent Upstream, Downstream, Small Stream article and fish a few of the deeper pools with a downstream weighted wet. The fly was a beadhead Grey Hackle Peacock, and among the trout that found it to their liking was a spiffy brown, who tracked the fly on the retrieve before striking.

Halo, I love you. Nice brown, lousy photo. This is what happens when your good camera runs out of battery and you’re forced to go with a quickie from the phone. 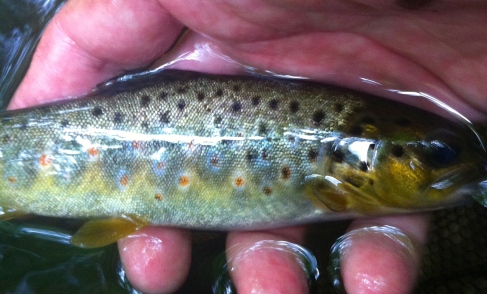 I was able to coax the better part of two hours out of this morning’s cigar, a Gispert Churchill. The air was still enough to blow smoke rings over dark waters, where the fishing was incendiary.

2 comments on “So much water the stream was on fire”